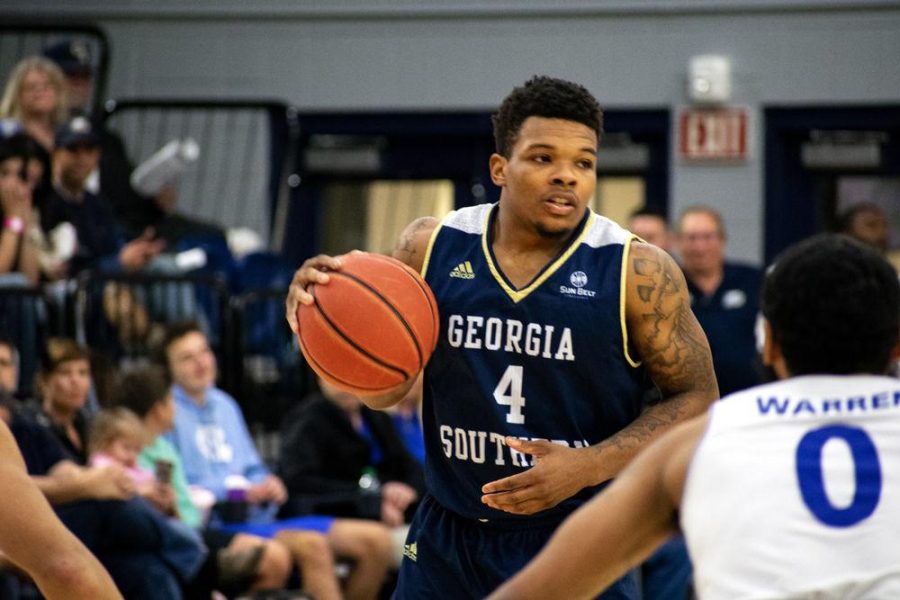 Senior guard Tookie Brown (4) scored a season high of 32 points against the Ragin' Cajuns as well as shooting 100 percent on three-pointers.

The Georgia Southern men’s basketball team found redemption while claiming a victory over the University of Louisiana Lafayette Wednesday night.

The previous time the two teams met this 2018-19 season the Eagles fell to LA in a close 2-point match. This time around GS was determined to not let a close score get the best of them as they defeated the Ragin’ Cajuns 103-86.

It comes as no shock that it was senior guard Tookie Brown who lead the Eagles as he played an astounding game where he scored a season-high of 32 points as well as playing a season high of 40 minutes total. While Brown shot 56.3 percent from the floor the team as a whole averaged an impressive 53.8 percent for shooting from the floor.

Red-shirt sophomore guard Quan Jackson also was a standout player last night as he scored 23 points in the 33 minutes he played as well as shooting 66.7 percent on three-pointers.

LA put up a good fight as they shot 48.4 percent from the floor as a team as well as raking in five blocks. Jakeenan Gant lead the Ragin’ Cajuns by scoring 23 points in the 35 minutes he played, but it wasn’t enough to give LA the edge over the Eagles.

Defensively the Eagles outplayed LA as they tallied 41 total rebounds compared to the Ragin’ Cajuns’ 29. Senior forward Montae Glenn lead GS in rebounds with eight on the night- three offensive and five defensive.

With this win the Eagles now hold an overall record of 14-9 and a conference record of 6-4.

The Eagles will continue their road play in the Louisiana as they take on the University of Louisiana at Monroe Friday at 8 p.m. The conference match will be streamed on ESPN+.