The Georgia picker: The man behind My Cousin Vinny’s Bargain Barn 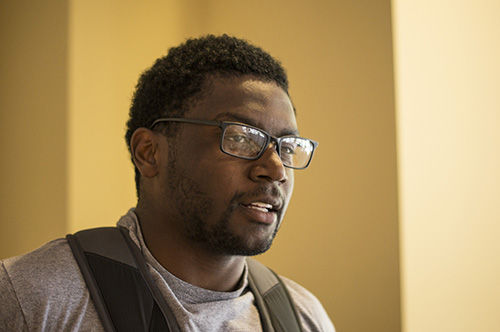 Deer heads and hats are among the eclectic items available at the store. Photo by Alexa Curtis

Vincent “Vinny” Castellano owns My Cousin Vinny’s Bargain Barn—officially an antique furniture store, though he calls it a “junk store”—located on Highway 301 in Statesboro, Georgia. The store, a two-story structure surrounded by scattered outdoor merchandise, has been open for about 15 years.

When I walked into the store to interview Castellano, the Georgia Southern – Georgia State football game was playing on the radio by the cash register, but the chair at the counter was empty. Castellano was outside, talking to a man with gray hair.

Displayed by the counter in a frame was a newspaper clipping from The Statesboro Herald, which told the story of Castellano and his neighbor saving a woman from a house fire in 2013.

When Castellano came in and we started talking, the man from outside walked in.

“Thank you, God bless you. Have a good—and tell her I’m very sorry about her loss, alright?” Castellano said to the man.

“I’ll respect that,” the man said.

“See you later. Bye-bye,” the man said, walking outside.

“Take care, be safe,” Castellano said. He turned to me. “He’s a great guy. He comes in here, he gave me knives once, he brings great stuff. He says, you don’t like this, throw it out. But I do a lot of giving away, too. I give people stuff when they have no money. College kids, I give them a break and stuff, because a lot of you guys really have it hard.”

Castellano and his three daughters moved to Georgia from New York, where he said he worked for a phone company for many years. He began buying, fixing and selling items in New York before opening his store in Statesboro.

One of his daughters, Krysta Castellano, said she ran the store before she left Statesboro to attend the University of Georgia as a financial planning major. She graduated high school early by taking online classes, which allowed her to run the store full time from until she completed her associate degree. However, she began helping at the store before she worked there full-time.

“Dad opened it in 2003, and I want to say, when I was 15 or 14, I remember being picked up from school before I could drive, and Mom would drop me off there, and I would be there from after school until close,” Krysta said.

Vinny Castellano said he enjoys building and fixing items he collects at his store. Photo by Alexa Curtis

Krysta said the store has always been a family-run business. Both her older and younger sister ran the store at different times, as well as her mother prior to the Castellanos’ divorce.

“It definitely was a good experience, being able to run a business, family-owned, and learning the in and outs of buying and selling and pricing,” Krysta said.

She said some of the most interesting store items she remembers were the antique clocks, family heirlooms people sold, jewelry and a mummified monkey.

One of the challenging aspects of running the business, Krysta said, was pricing the items to ensure the store made a profit, as well as whether they were legitimate.

“You do have to look up what things are going for, and if it’s actually real or fake, because a lot of times, people are going to come in there and try to talk things up and act like they’re something that they’re not,” Krysta said.

Krysta said her father always had an interest in buying and selling collectables, as well as fixing and changing old items. However, his career in selling antiques and other items began as a hobby.

“When he opened the business, it was just a hobby. He, and this sounds kinda bad, just opened it out of the blue. I don’t think he really talked to my mother at the time,” Krysta said. “Wasn’t too good at the moment, but it’s just something he’s always had a passion for. He’s always loved antiques, like collecting things, so he just opened a business, and it’s been running for 15-plus years, so he must be doing something right.”

Before I had time to ask Castellano any of the questions I had written down, he began telling me there were ghosts in his store.

“You know, it was weird, a guy came in here the other day with a rosary bead on, and I’m like, ‘Oh, you wear a rosary bead?’ Because I always wear a cross, and he was like, ‘Yeah, it keeps the spirits away.’ He went upstairs, and things started happening,” Castellano said. He motioned toward a wooden cross hanging on the wall by the cash register. “That thing came off the wall and hit me on the head. It came apart and hit me on the head.”

He said a woman told him an old mattress he had in a baby crib upstairs was haunted with an unsettled spirit and that he would need to get rid of it.

“And I was hearing things up there, so I was like, oh my God. I threw it out. I burned it,” Castellano said. “And after that, nothing happened. It’s just crazy stuff that happens. I had a cat like that. It freaked me out.”

The cat, he explained, was a skull of a cat he found under someone’s house while digging around for old glass bottles.

Castellano said he hopes to retire in Costa Rica or Brazil. However, he is unsure of what will become of the store when he leaves.

“I don’t know yet. I might even keep the store and have someone run it. The only problem is people like to deal with me directly,” Castellano said.

Two customers walked around the store, looking at the merchandise on the shelves. They were regulars, and Castellano knew them well. Dylan Bragg, a young man wearing glasses, said he comes to the store several times per week.

“It’s where cool stuff goes to retire,” Bragg said, explaining that he has purchased instruments, furniture, albums and more from the store.

The other customer, Ryan George, said he started coming to the store almost every day when he moved to Statesboro two years ago. He said he has found boats, motors and pictures at the store.

“I’m a regular. I come up here just to hang out, look at everything that he gets new in,” George said.

Castellano said George knows the store’s inventory better than he does.

Toward the front of the store, a player piano and a variety of other items are displayed. Photo by Alexa Curtis

Although Castellano has several regulars, he said many of his customers are people in the Georgia Southern University community, including students and parents.

“I get all different people. I get a lot of out-of-towners. Believe it or not, a lot of my clientele now is students’ parents,” Castellano said.

Castellano and I walked through the doorway to the rest of the store, where he keeps furniture, paintings and a wide variety of odds and ends. He talked about pieces he has built, like the chair he made with an old engine at its base. He pointed at a corner of the room with tapes and a tape player.

“That’s an 8-track player. I probably got 200 of those 8-track tapes. If people have an old car and they want to get 8-tracks, because, you know, a lot of the old classics have 8-track players. But even the truck I drive every day is a 1982, and it runs great,” Castellano said.

He gestured toward a brown sofa.