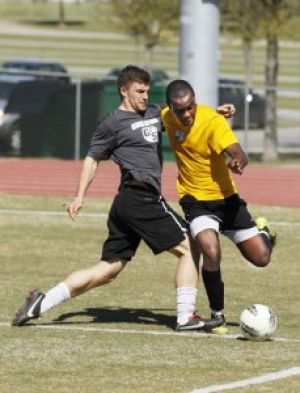 It’s the week of opening night and the cast and crew of “The Great American Trailer Park Musical” are ready to show you what goes on “This Side of the Tracks.”

The synopsis reads- “There’s a new tenant at Armadillo Acres—and she’s wreaking havoc all over Florida’s most exclusive trailer park. When Pippi, a stripper on the run, comes between the Dr. Phil–loving, agoraphobic Jeannie and her tollbooth collector husband—the storms begin to brew.”

The show will be put on by the Masquers theatre production organization on campus.

Auditions for the show were held before finals last semester and the cast has had three-hour rehearsals four nights a week since the beginning of the year.

Sears has been familiar with the show for almost 10 years. “I thought this show would be a great addition to our season. We had enough of the right people with the interest and skill set,” she said.

Junior theatre major, Jordan Soto, who plays the show’s antagonist Duke, has been in other Masquers productions previously.

“Compared to other shows I’ve done, this one is more energized. The music is catchy, and it’s been a blast being a part of it,” Soto elaborated.

Sears has put her own spin on the show by adding an ensemble to the principal characters. “The ensemble is a group of tourists stranded on their way to vacation. There’s also a trio of women that act like a Greek chorus who guide the audience through the story. They address the audience and break the fourth wall. When they first do that, they’re talking to the ensemble,” she explained.

We are first introduced to these three women, Betty, Linoleum and Pickles, during the show’s opening number “This Side of the Tracks.”

When developing his character Duke during rehearsals, Soto said “it’s been challenging for me to sound threatening and intimidating. I tend to be a kind person so to act like a jerk has been difficult.”

Soto said he drew inspiration from his older “wild child” brother, as well as a character he played in the production “Red, White and Tuna”, “another Southern boy who was not too bright” to aid him in his performance.

Soto hopes the audience “has a great time. This show is a lot of fun and I just want people to laugh and enjoy themselves.”

Sears wants the audience to realize and identify the themes of “resiliency and commitment” in the show. The show also contains “the idea that it’s possible to forgive people that have made mistakes.”

Songs and dances in the show are from various genres including disco, rock, country and gospel, so there’s something every audience member can enjoy.

Sears also mentioned the show is “delightfully raunchy and offensive” and suggests that only ages 16 and up attend.

Tickets are free for students, $15 for general admission and $12 for seniors & military. They can be purchased at the Fine Arts Box Office or online at cah.georgiasouthern.edu/armstrong-box-office.