It’s a Classic for a Reason: On the Verge Concert 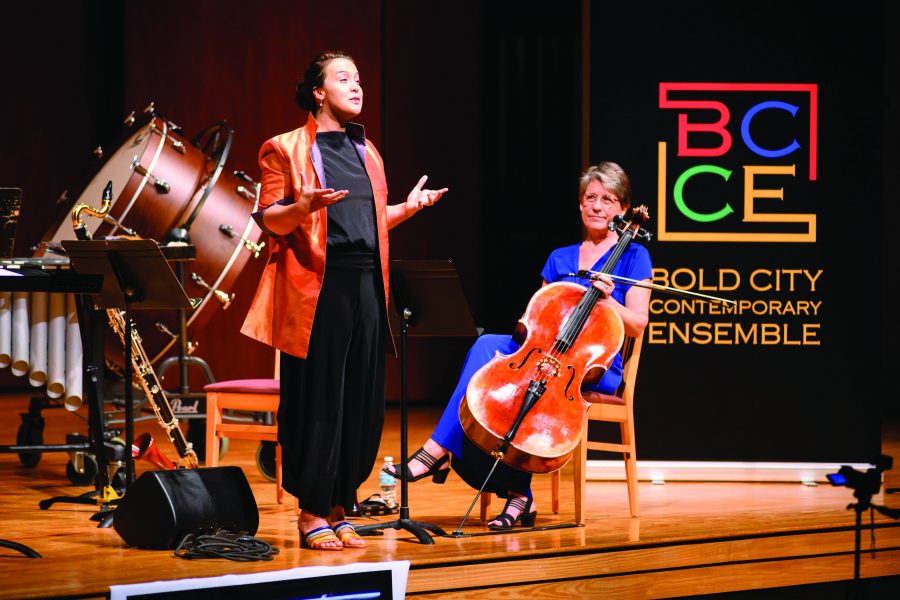 Boja Kragulj introducing a musical piece at On the Verge. Photo by Katherine Arntzen/University Communicatons and Marketing.

The On the Verge program hosted a concert on Sept. 10 at 7:30 p.m. and invited the Bold City Contemporary Ensemble (BCCE) to play ten pieces. The BCCE is comprised of a percussionist, a clarinetist, a flutist, a cellist, a pianist, and a violinist who also composed two of the pieces that BCCE played on Tuesday evening.

Two of the pieces of the night were improvised.

The percussionist, Charlotte Mabrey, asked the audience to shout out a mood or a theme. The theme of the first piece was “lyrical.” Then, three pieces and an intermission later, the theme of the second piece was “anger.”

Everyone in the group played “.On c e.”,  a piece composed by a Georgia Southern graduate student, Francisco Corthey.

The musicians used expressive body language  as an aide to express their music on stage.

During the intermission of the show, Sean White, a music major in attendance, said, “It’s definitely interesting,..it’s outside of some of the normal genres.”

“We really didn’t have an outlet for this kind of music,” Dr. Martin Gendelman, the program’s director, said on why he started the On the Verge music program.

On the Verge is the program that bring groups that play contemporary classical music to Statesboro and Armstrong campuses.

Because the program relies on grants from a variety of sources to host events, Gendelman says, “I cannot assure we are going to have one next semester.” But he says, “First thing I would love to see is people coming to the concerts.”

He goes on to say, “It’s hard to continue something with an audience of 20 people.”

“There is always something that they are going to find interesting.”

Gendelman runs the On the Verge program himself with help from the music department.

If you are interested in helping with the On the Verge program, you can always approach him by email at jmgendelman@georgiasouthern.edu.