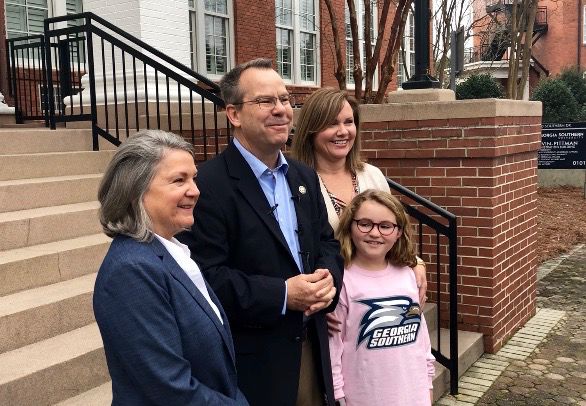 The Board of Regents named Marrero as GS’ 14th president on Thursday following a five month presidential search after the resignation of former president Jaimie Hebert.

“I’m so excited and thrilled to be the 14th president named just Thursday with the Board of Regents voting me in officially which is really exciting and to be part of the Eagle Nation,” Marrero said. “This is a thrill for us and my family.”

Marrero discussed multiple topics that all related back to leading a consolidated GS.

Since 2009, GS has had three different presidents with each president’s’ tenure here lowering each time.

When asked about being at GS for the long run, Marrero said the opportunity to bring together GS’ three campuses would be a long term goal that he would like to see completed.

“For me this is an opportunity to bring together three very distinct campuses,” Marrero said. “That’s not going to be overnight. That’s going to take some time and we’re committed to being here to see that to fruition.”

Marrero joins a post consolidated GS that has three different campuses. Marerro said he has experience with managing multiple campuses during his presidency at the University of West Georgia.

“In Newnan, we worked with chamber development authority,” Marerro said. “We talked about what were the exact programs and the industry technology different sectors you’re looking to attract and make sure we’re delivering those programs in those essential need areas and working in tandem.”

Marerro said although he will be on the road a lot, his family will have a home in Statesboro and will probably have a place in Savannah.

“I’m going to be spending time here as a principle home base and being as present as possible in Savannah and linking that,” Marrero said. “What we want to do at the end of the day is make sure that everyone sees Georgia Southern as this regional presence. This united single university serving the entirety of the region.”

Nickel to stay for a bit longer

Although Marrero was announced as GS’ next president, Nickel will continue to be GS’ interim president until March 31.

Nickel said she is thrilled for both Kyle, his family and for the GS community.

“He is the right person at the right time,” Nickel said. “He comes with the experience that Georgia Southern needs to lead into the future. Thank you all for being kind to me while I was here and I am excited about what Kyle is going to bring to Georgia Southern.”

Marrero will continue to be the president of UWG until March 31 and will begin his position as GS’ president on April 1.

Marrero and his family will be visiting the Armstrong campus in Savannah on Sunday.