“No Exit” will be entering the Armstrong Campus 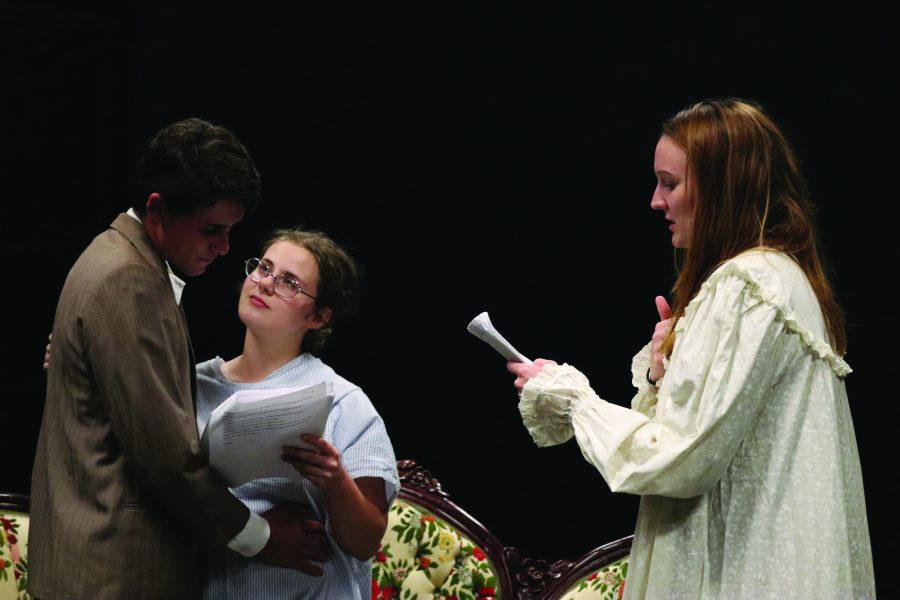 Actors Zachary Holick, Alissa DeLucia and Fiona Schirmer preparing for their roles during a rehearsal for “No Exit.” Photo by Madison Watkins.

Caroline Pace, director, senior and student of Georgia Southern, will be bringing the play “No Exit” to the Armstrong Campus.

The original play was written in 1944 by Jean-Paul Sartre. The plot of the play is two women and one man are locked up together for eternity in one hideous room in Hell. The windows are bricked up, there are no mirrors, the electric lights can never be turned off, and there is no exit.

“‘No Exit’ is about Garcin, Inez, and Estelle. These three people come to find that they are inextricably linked, and that when we fail to define who we are on our own, when we ignore the faults within us, we fall to the mercy of those around us,” said Pace.

Pace further explains, “They should know that once they enter, they cannot leave, because in this world there is… ‘No Exit.’ I’m kidding, I think that the audience should come with no expectations and an open mind.”

“The play covers topics that are morbid and those topics can get pretty heavy, pretty quickly but if you come in with a curious mind you might leave learning something you didn’t know before. Or you might just be thankful that you can actually leave unlike Garcin, Estelle, and Inez.”

Pace said she first came across the play last semester when she had to choose an establishing scene from a play for an assignment in her play directing class.

“I remember coming across ‘No Exit’ and I thought it sounded interesting, so I decided to skim it and I ended up spending the next two hours reading the play and re-reading it because I enjoyed it so much.”

“When I learned of the opportunity to possibly direct a show in the Fall, I had no doubt that ‘No Exit’ was what I wanted to do.”

“Since I am new to the game, I feel like everything that I am doing is completely backwards, but I realize that’s just doubts creeping into my mind.”

About rehearsals, Pace said, “I set [them] up by starting out with vocal and physical warm-ups. Then I have my cast and crew play improv games together to bring the energy up before we dive into rehearsing.”

“I also tend to be impatient at times, so I have had to learn how to take notes and then relay the notes to my cast instead of stopping them every time I have an idea or a new take on the scene.”

About the play’s setting, Pace says, “I’m not sure that my version of ‘No Exit’ brings a fresh new look. There are a few ideas that the crew have come up with that are brilliant, but I can’t say that I have tried to make it modern or new and exciting. I love the work that Sartre has laid out and I wanted to stay true to that and the time period that it was set in. I also wanted to focus in on the comedic aspects of the play and make sure that the audience gets a break here and there.”

Pace concluded with, “I am so unbelievably proud of this cast. They have surpassed every expectation of mine, and I have thrown a lot at them. When we lost a week of rehearsals to Hurricane Dorian I was very nervous that the cast would be stressed out and worried, and from the beginning I have said that I want to make this process as easy and stress-free as possible, but lo and behold they have been the ones to bring me back down to earth and I couldn’t be more thankful. They embody these characters so well, and with every rehearsal I see them reach deeper into their character and I know that they know these characters like they know themselves and I am in awe of them.”

“No Exit” will be at Jenkins Hall Blackbox Theatre on Oct. 3- Oct. 5 at 7:30 p.m. There is also a matinee show on Oct. 6 at 3 p.m. Admission is free for students and $12 for general admission. Tickets can be purchased at the Fine Arts Box Office.