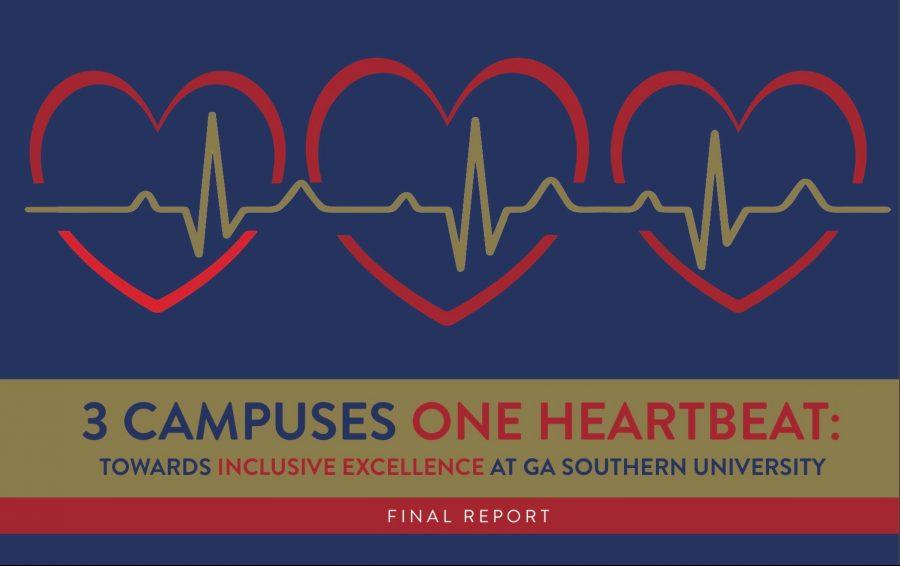 Madison Watkins, Editor-in-Chief
“Healing can only happen by listening and allowing folks a chance to articulate and emote and get things out and to have a dialogue…”- Dr. Damon Williams
Dr. Damon Williams returned to Georgia Southern to host open forums on the Statesboro and Armstrong campuses. The forums concerned his recently published findings on the university’s results on last semester’s Inclusive Excellence survey.

The report has yielded captivating responses from students, faculty and administrators since it was published by the university on Aug. 28.

Williams hosted a forum in Statesboro on Oct. 2 and at Armstrong on Oct. 3 in the Ogeechee Theater.

Williams also opened with the fact that even though he isn’t a university administrator, he would answer questions to the best of his ability. “So obviously I’m not the president nor the provost, nor a cabinet-level officer. So there’s limits to how much of these questions I can totally respond to, in terms of understanding, action, leadership and communication. I can show a lot of compassion though. I got that in abundance,” he said.

Then, he discussed what three steps need to happen when a merger occurs. They are stabilized transition, start building an identity as a new institution and how do each of the pieces that are coming together change and evolve.

Williams emphasized the points of communication and empathy. “It’s also important to have a great deal of empathy for what people are feeling and experiencing… you got to say what you mean and mean what you say, don’t play games. If this is the pathway forward, you say ‘this is the pathway forward.’ Even if it’s tough news, even if it’s news people don’t want to get, you say it with empathy and you say it with a sense of understanding that it’s not easy, but you’re saying it.”
“We need to heal. I don’t think the president is hearing that. I think that by not talking about the Statesboro campus so much they think that’s allowing us to heal but it’s not, it just goes more deeper than that. It wasn’t an acquisition. It was a takeover.”- Dr. Elizabeth Desnoyers-Colas
After discussing the recommendations that were listed at the end of the report to help the university improve, Williams gave a few final thoughts before answering questions.

“We’ve delivered the report. I’ve had really good conversations with the president, really good conversations with the provost and it’s my sense and understanding that there’s a strong level of agreement and alignment to the ideas that have been articulated… My job was to produce ideas. It was to capture your voice. It was to do that authentically and honestly, and we tried to do that and if you read the report, you’ll know that we gave stark assessment. We didn’t sugarcoat it, so to speak… I have strong belief in those leaders that they will do as they said and now we’re in a place where, honestly the frameworks that have been offered, the guidance that has to be offered has to be brought down to ‘rubber meets the road’ action.”

Associate professor of Communication Studies Dr. Elizabeth Desnoyers-Colas was the first to speak when the floor was open for questions.

“I would like to say that if we took that report and boiled it down to about four words is how it has to do with Armstrong: We need to heal. I don’t think the president is hearing that. I think that by not talking about the Statesboro campus so much they think that’s allowing us to heal but it’s not, it just goes more deeper than that. It wasn’t an acquisition. It was a takeover… Watching administrators that you work with having to re-interview for jobs they were already doing so well at Armstrong was really painful… Our provost did not go through that process with us. He doesn’t have a clue as to what we all went through… Action and accountability is great but if we are going to be three campuses with three different heartbeats, legacies or whatever then let us be that. Stop trying to shove eagle down our throats and let us heal.”

An anonymous question submitted was “why aren’t our campus experts, i.e. gender studies department, being sought for their knowledge?”

Williams didn’t have a concrete answer but did say, “One of the things that I believe is individuals who bring great content expertise around issues of diversity, whether they define from a gender lens, race lens, disability, whatever the lens is, I think they should be consulted. I think they should be feeding into our understanding of what to do and how to do it.”
“I know how difficult it is what they’re tasked to do, but I also know that they need to come here and be in this conversation with you.”- Dr. Damon Williams
Another anonymous question submitted was “what made the Liberty Center different (better)?”

In the report, the Liberty campus showed more positive response rates than any other campus.

Williams said he believes these scores were due to, “we had much much smaller response rates for them… This was a pulse type survey… their scores were much higher, but their numbers and their response rate was much lower. So there’s a part of me that doesn’t invalidate what they said because what they said is what they said, but I do question if we got more data if it would have been as starkly different… I do believe that the culture in the students that go to that institution there’s a different kind of reality… it’s a different type of cultural dynamic.”

A question asked by Nora Cook, a student in attendance, was “what accountability systems will be in place to ensure administration continues this [inclusive excellence] work?”

Williams responded with, “I know how difficult it is what they’re tasked to do, but I also know that they need to come here and be in this conversation with you… as the campus-wide strategic plan rolls out and other plans roll out, keep asking that question ‘what is the accountability process?’… For one of the institutions we’re working with right now, being vice president, this will be a part of their annual review. This is a part of their five-year contracts. This is accountability at this level.”
“You can’t spend one day walking around this campus and not see the diversity… If you think it’s big now, it’s going to get bigger.”- Dr. Damon Williams
The last question asked was “in your experience, how do we have a conversation with people who think we shouldn’t have a conversation?”

In some of the anonymous feedback that was published in the report, there were a few comments asking why this report was needed when we could be focusing on academics or other “more important” topics.

Williams responded with, “There was one group in the report saying ‘I don’t see color. I don’t see difference and when are we going to get to a point where we start being colorblind?’ It was this neutralization of difference for the overarching objective of accomplishing inclusion. So in that perspective, inclusion meant the eradication of difference not embracing what makes us different… So how do you get those people on board?… You can’t spend one day walking around this campus and not see the diversity… If you think it’s big now, it’s going to get bigger. Why? Because the demographics are already changing. Why? Because the sexual gender identity revolution is just in phase one… The reality is there’s always going to be a group that’s going to be resistant… I don’t spend a lot of time worrying about them. They’ll get it and if they don’t, ultimately the world will have shifted so much that we’ll just keep moving forward.”

If you would like to read the Inclusive Excellence Report in full, you can find it linked in this story on our website or in your student email from Communications and Marketing.