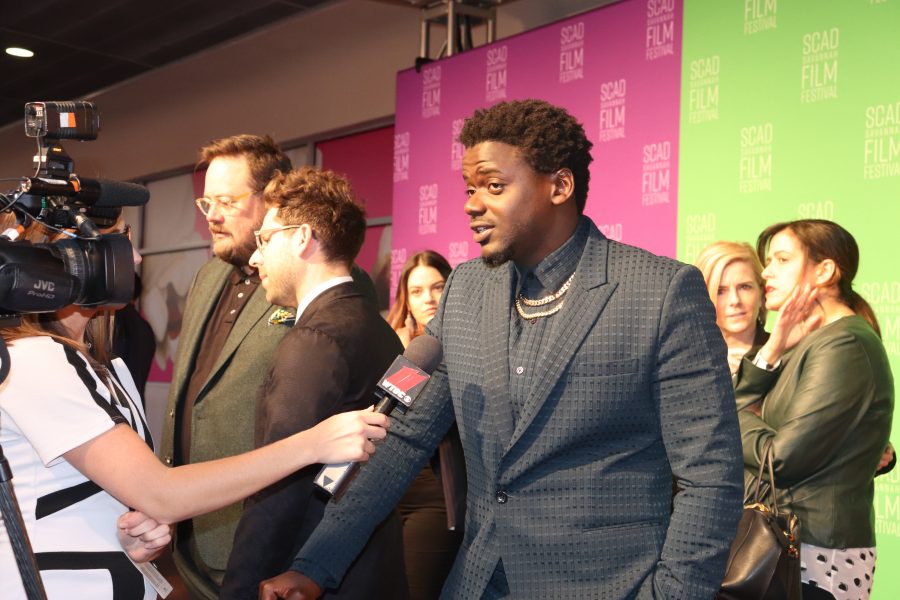 “Get Out” star Daniel Kaluuya being interviewed on the red carpet. Photo by Kee'Ara Smith.

The SCAD Savannah Film Festival brought many wonderful titles to the Lucas and Trustees Theaters. The festival has ended, separation anxiety has set in and nothing really matters anymore. It was a great time and many amazing films were shown.

I’m a pretentious and insatiable cinephile, so I apologize for the snobbery that follows. Make sure to look up some of the films and movies that are mentioned.

“Motherless Brooklyn” is Edward Norton’s film, but the supporting characters are right there with him. The mysterious and dirty dealing New York elite get a light shone onto them by a private eye with Tourette’s Syndrome. It’s a slow burn, but especially rich in all of the areas a noir should be.

Terrence Malick’s “A Hidden Life” was a beautiful, spiritual journey. Franz, an Austrian man is forced to fight for the Nazis during World War II. Once he notices the evil that fascism brings to his country, Franz objects to fighting because it is against his faith. He goes through many trials but his wife Franziska and two daughters are always with him.

Director, Terrence Malick is known for his small amounts of dialogue and awe-inspiring shots. With this film, he crafts a beautiful love story that gives viewers amazing performances and an epic story of one man’s drive to fight back against the common place form of evil that invades his country and life.

While shooting “The Peanut Butter Falcon” in 2017, Shia LaBeouf (like many of us at one time or another) had quite the downtown Savannah night. He was arrested and made a scene. After he wrapped shooting, he entered rehab and learned he was suffering from Post-Traumatic Stress Disorder (PTSD).

The film “Honey Boy” is LaBeouf’s exploration of his troubled childhood. LaBeouf wrote the film while in rehab. His friend and Director Alma Har’el read what Shia wrote and together they made the movie “Honey Boy.”

Going into this film, you really don’t know what to expect. Upon leaving, you’ve found that it was an exploration of a father and son’s complicated relationship. This film is a deep, unflinching character study that builds and builds to a catharsis that you don’t see coming. It’s a very personal, yet accessible movie. I definitely recommend it for all the “Even Stevens” and “Transformers” series fans.

After the credits rolled on “Honey Boy,” I was distraught and hungry, so I met a friend and got a bite to eat. Next thing I knew it was almost 6 p.m. and I had to hustle down to the red (actually purple) carpet to interview the exquisite actress known as Elisabeth Moss.

En route to the Trustees Theater, I realized it was Halloween. I looked at the outfit I was wearing. Then I thought it’s Halloween. Downtown vintage and clothing resale shop Civvies was on the way, so I dove into the store because it was definitely Halloween. I grabbed a bright blue top hat that had a nicely tied bow and grabbed a button that said, “Time is an Illusion.”

After I donned a ratty old sports coat, I knew it was most definitely Halloween. As the “Much Madder Hatter” I made my way down to the Trustees. It was 6:05 p.m. and I was ready to meet Elisabeth Moss. Some of the professional “journalists” looked at me and scoffed. I really didn’t care what they thought of my outfit, it was Halloween.

Some time went by and I sat there patiently sweating because it was 80 degrees on Halloween and I was wearing a cheap sports coat. Then people began to whisper, I noticed some of the camera guys gulp and tug at their collars. The man with the notepad next to me began scratching out all of the questions he had prepared and started writing new ones. I sat there thinking to myself “Okay now Miss Moss, let’s hurry this process up it’s hot out here and it’s also Halloween.”

Moss was a short blonde-haired woman who smiled really big. As she made her way down the line answering questions, I sat there with my hands on my hips and tapped my foot against the curb. She was very nice, and never stopped smiling.

Finally, she got down to where I was and it was time for my question. As the Much Madder Hatter I said, “Favorite Halloween costume you’ve ever worn?”

Elizabeth looked at my costume and said, “Is this Halloween or is this you?”

She said, “That was the right answer.”

Next she stuttered and wasn’t sure how to answer because she hadn’t dressed up in costume for Halloween in a long time. I was taken aback because she was an actress and they dress up all the time. There had to be a day on set where it was Halloween and Don Draper was having a tense conversation with Peggy but at the end of the day, this is all just hopeful speculation.

“A fairy,” she finally answered.

That is what Moss’ last known Halloween costume was everyone. A fairy, who could’ve imagined? Not I. After coming upon this newfound information, I decided to take off the hat. My job as Much Madder Hatter was complete, and I had succeeded.

On the night of Nov. 1, the lights in the Lucas Theatre dimmed and “Parasite” began playing. All I have to say is, go see this one whenever you can. It’s one of the best films to come out in the past 10 years easy. It has laughs, shock and heart. What starts out as a con job quickly spirals and becomes much more than you could ever anticipate.