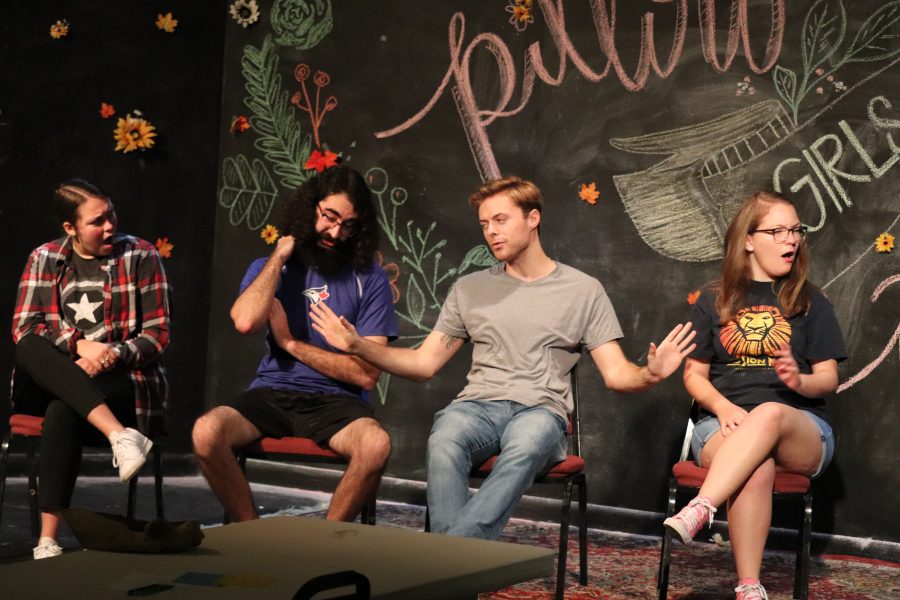 This year, the play runs through Nov. 14 – 16 at 7 p.m. and features a cast that includes veteran and novice actors alike.

The George-Anne: Inkwell interviewed several of the actors, Jones and Watkins to gauge the premise of “Jason and Tina Break Up Again” as well as the effort put into the production.

“This is a three-act comedy. It’s about two characters, Jason and Tina. These are two people with distinct personalities and, this is the story of over eight years of their relationship or a kind of a will-they-won’t-they relationship,” said Jones.

Jones said he was inspired by “a lot of sitcoms specifically ‘Seinfeld’ and ‘Curb Your Enthusiasm.’ I really like the writing style of Larry David and Jerry Seinfeld… That’s why each act is like 30 minutes or so, and they all have a story that wraps up towards the end.”

Some of the characters include: Jason Lyrra, played by Griffin Page, “a cheap, crude, aspiring writer who constantly puts his foot in his mouth;” Jermaine, played by Jacob Ivester, “Jason’s wacky best friend who is always executing a half-baked scheme;” and Lacey, played by Sarah Lee, “A manipulative waitress who will do anything to take control of the diner.”

“[It is] Tough sometimes. Because you know, I think interpretation is different for everybody. So, the way I interpret the character is going to be different than the way [Jones] probably intended it when he wrote it and the way [Watkins] directs it, and youjustkindofhavetofindacommon ground and a common understanding about who the character really is and just work with each other,” said Ivester on his experience during the rehearsal process.

“I think that the interesting thing for me was I didn’t, I didn’t have a grasp on my character when I first read them. So, throughout the first few weeks of rehearsals I was trying different things to figure out what worked best for him. I think it was neat to see how–I think all of us kind of did that first, and then once we found it, because we were kind of feeding off each other once we found it we just found like a harmony of the characters to where it worked best for the entirety of the play,” said Page.

Watkins weighed in with her experience in orchestrating the whole play.

“It’s been a good learning experience… it’s probably the best way to learn to get real-world experience if I wanted to do a show for real, because I’m pretty much doing all the jobs with help from other people. In addition to being the director, I’m the props-person costumes-person, stage manager, sound designer. It’s pretty much me and Kenny and some of the actors doing everything and also, Tony, the BCM director, is helping out a lot with the tech and set building… It has been overwhelming at times, but it’s the best way to learn,” said Watkins.

The actors, Jones and Watkins also gave their insight about getting into acting.

Some of the topics they discussed included what it takes to become a student actor, how to get over the fear of performing and how to portray a character on stage.

“I would say, you definitely want to get trained by somebody. I’d definitely recommend, you know, Armstrong’s theater program. I learned so much from there so I definitely recommend it… You have to learn from other people and kind of almost be a servant first before you become the master or the big actor,” Jones said.

“Go see shows. Read plays. Take classes. Audition. When you’re ready… we’re always learning, and even if we do end up doing it professionally, we will still be learning as it is for most jobs, I guess,” said Lee.

“Usually, if you’re an actor, [nerves] help your performance, because it keeps your energy up and it keeps you aware of everything because if you’re not nervous then you get really comfortable with it. And, if you’re comfortable you’re not totally focused and then you can miss a que or what have you, but if you’re nervous, then you know what you gotta do. You know you have to stay focused. You know you can’t break character because there’s people right in front,” said Watkins on getting over stage fright.

“You kind of have to tap into what- -at least for me–to tap into what I’ve already seen on the screen or another play. I don’t know who exactly I ‘channel’ when I play Jason. A lot of it, actually, I try to just be myself–a part of myself…” Page said.

Desserts such as red velvet cake and cheesecake will be served during intermission. The menu will be provided on arrival.

SendMeNow is sponsored by the Collegiate Ministry of the Georgia Baptist Mission Board.