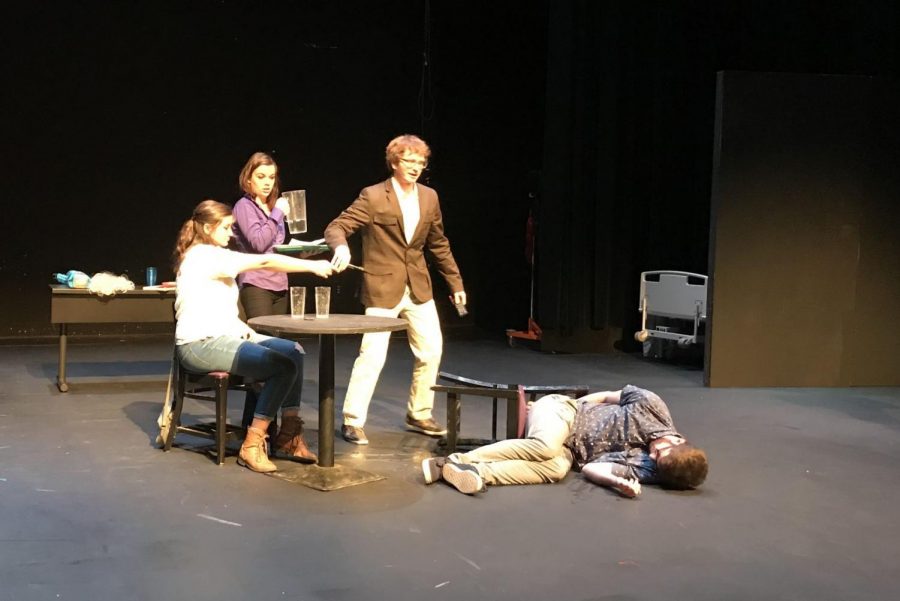 “This is the first quote unquote big play that I’ve ever directed,” Foster said.

Shepherd said that he is satisfied with the performance of “Gruesome Playground Injuries.”

“I’m happy the way [the play] came out,” Shepherd said. “I think it worked well.”

“Courting 101” is a comedic classroom-style guide to romance, whereas “Gruesome Playground Injuries” is an emotional love story about an accident-prone boy and his best friend.

“It’s also very nice to be in the show because it’s a chance to do something different,” Valenzuela said. “I’m a stage manager and I work in a costume shop, so being able to be on stage is pretty cool, and being with people that I like.”

There is a scene in “Courting 101” where Valenzuela throws two glasses of water at McManus’s face.

“It’s nice to get water chucked in your face twice a night,” McManus said, still damp from rehearsal.

“It was a very interesting experience,” Parrish said. “It’s the first time I have ever done a one-act, so that was something entirely new on its own.”

“This is definitely one of the most difficult shows I’ve ever worked on,” Mendes said. “Over time, it became really fun, and this is, like, my favorite show I’ve ever done.”

Childress is also having fun starring in “Gruesome Playground Injuries.”

“It’s such an interesting play because of the mixed up timeline and the intensity of some of the scenes, and so it was really fun and I really enjoyed it,” Childress said.