ISO Celebrates Culture with Taste of the World 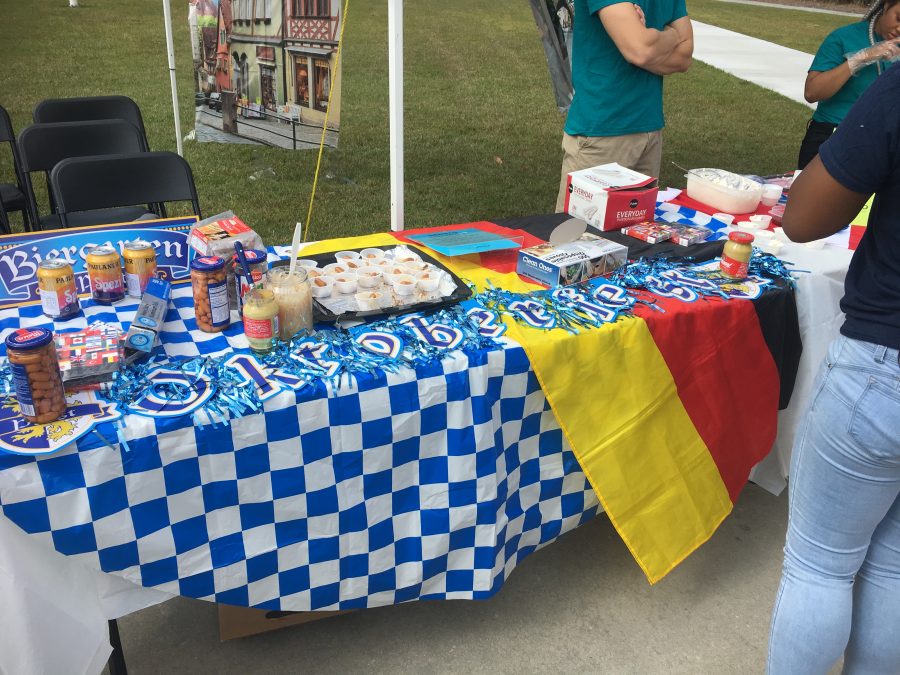 The Germany table at the Taste of the World event. Photo by Rachel Hammond

For many students, international travel is not an option. However, the International Student Organization (ISO) brought culture to campus with Taste of the World on Wednesday, Nov. 6. The event took place in the Residential Plaza from 11 a.m.-2 p.m. Students gathered to try food and activities that represented countries from Denmark to India in conjunction with International Education Week.

One of the tables featured crackers with Vegemite from Australia. Vegemite is a spread made of yeast and different spices. It is somewhat known for being unpalatable to Americans.

“It tastes like soy sauce,” one student remarked after trying some. “It literally tastes like there’s blood in my mouth,” another described the taste. Luckily, the table also had chocolate cookies called Tim Tams to wash the taste out.

Another table featured Vietnamese spring rolls and games. Sabrina Bui made the spring rolls while wearing a traditional Áo dài. On the ground, students competed against each other in a “chopstick challenge” by attempting to transport more beans using chopsticks than the other.

Students were wowed at the South Korea table as students danced in sync to K-Pop songs. Additionally, students were encouraged to try their hand at writing Hangul, the Korean alphabet. Using brushes and ink, students set to work writing simple phrases such as “Hello” and “Goodbye.”

At the Egyptian table, volunteers passed out samples of basbousa, a crumbly bread sweetened with simple syrup. Several students went back for seconds once they had made their rounds.

Volunteers at the Danish table had samples of rice pudding and cherry compote. Next door, the Italian table had an assortment of chips of different flavors, as well as flavored chocolate.

The Japan station featured mochi stuffed with red bean paste and seaweed. The mochi was a big hit at the table. “It’s so soft and weird but it’s really good,” a student said after trying some. There were also cups of mango soda to accompany the food.

After they browsed and had their fill of international food, students were encouraged to try the Fire Extinguisher Challenge. “Fire is international,” was the slogan employed by the men in charge of the challenge.

Students picked up a mock fire extinguisher and attempted to quell simulated flames as quickly as possible. After, students recorded their time on a big sheet of paper. The fastest time was 3.9 seconds, while other students took so long the system stopped counting.

Taste of the World is just one of many events that ISO holds throughout the school year. The International Student Organization provides an opportunity for international and American students to socialize on the Armstrong campus and promotes an interest and awareness of the diverse cultures on campus. For future events, contact [email protected].