Graveface Museum Gets Creepy All Year 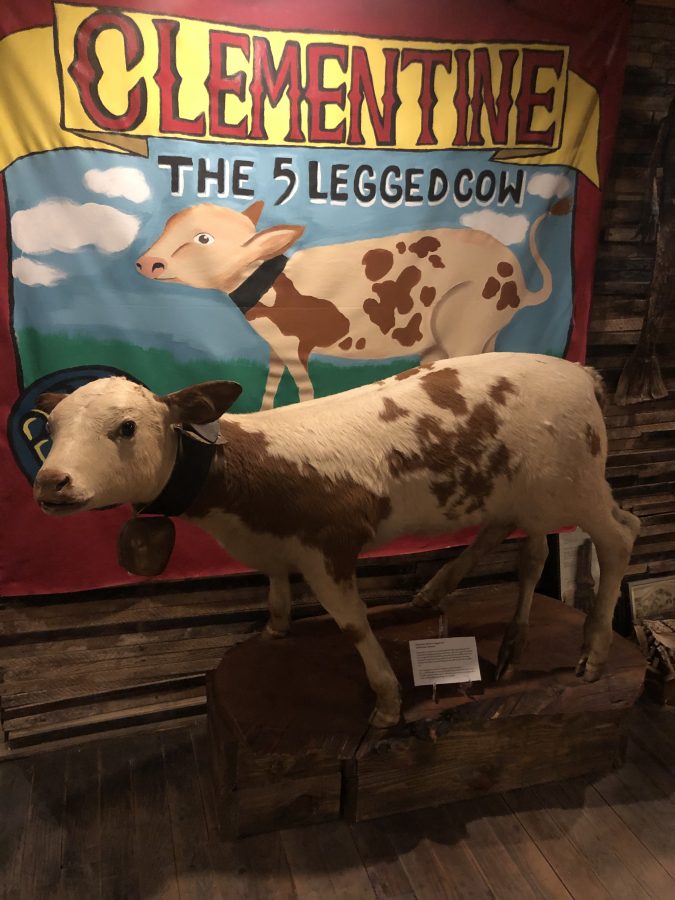 The latest Graveface venture is a museum devoted entirely to oddities and the macabre side of life. Graveface Museum opened on Valentine’s Day of this year, but had to quickly shutter itself due to the Covid-19 pandemic. After several months, the museum is back open and ready to receive visitors once again.

The Graveface museum is located at 410 E. Lower Factor’s Walk in downtown Savannah, between Bay St. and River St. Visitors to the museum enter through the gift shop that houses the weird and fun memorabilia that most of the museum is based off of. There are also records for sale in a nod to Ryan Graveface’s other venture, Graveface Records in the Starland District.

Museum patrons pass through the mouth of a giant devil’s head into the first room, dubbed “Roadside America” by museum owners and married couple Ryan Graveface and Chloe Manon.

The first room houses what was considered roadside oddities both real and cleverly manufactured from the 1940s, 50s, and 60s. The room holds real “freak” taxidermy, a very lifesize performing circus bear and a two-headed fawn with six legs.

Beyond the real, the room also has exhibits showcasing circus gaffes like Homer Tate’s collection of little mummies. Graveface gives patrons a quick introduction to the museum and talks briefly about each exhibition, mentioning that Tate, “cuts off his wife’s hair and used his cat’s teeth [to] make all these little mummies…” All of the objects within this portion of the exhibit are made of real things but are by they were promoted as something more bizarre than what they were.

During one talk, Graveface speaks of Tate’s peculiar methods in procuring shrunken heads. “He dug up bodies in Arizona and shrunk the heads and sold them via mail order claiming he found them in Borneo, he did ten years in jail for grave robbing,” Graveface said.

Another section of the room features what Graveface calls the “hoodoo voodoo stuff”. During renovations prior to opening, Graveface found that within the room there were light and dark sections of light coming through the panels in the wall. After cutting out a section of the wall, Graveface found a record in the wall that features a voice chanting and speaking in tongues. He also found voodoo artifacts not native to Savannah.

“[It’s] Fun stuff. I’m the right person to have rented this place,” Graveface said. The next room within the museum is designated as the cult room. The room features accoutrements that once belonged to infamous cults and their leaders, including a pair of Jim Jones’ aviator sunglasses and original Flavor-Aid packets used in his cult’s murder-suicide pact.

A T.V. monitor sits in another corner playing a promotional video for the cult Heaven’s Gate, and shows one of the leaders, Marshall Applewhite proselytizing. In the middle of the room rests a handmade table with an Ouija board painted onto it used to conduct seances. There are also letters and clothing that once belonged to Charles Manson.

Another section of the museum is dedicated entirely to horror films and video tapes from the 80s and 90s when rental video stores were the only way to find and watch films without going to a theatre.

Graveface Museum also boasts the largest free pinball arcade in Savannah. From there, guests can go upstairs to see the circus “freaks” collection and an entire room devoted to serial killers. From the left to around the room, Graveface has displayed artwork, clothing, letters and evidence surrounding the serial killings and murderers such as Phillip Jablonski, Robin Gecht, part of infamous “Chicago Rippers”, Charles Arnett Stevens, the “Recreational Killer”, San Francisco Witch Killers, Tommy Lynn Sells, the “Coast to Coast Killer.”

Graveface’s wife and co-curator Chloe Manon, calls the room the “Death Row Room”. All of the material, including original court documents and transcripts of the interrogating were obtained from the lead investigator in the case.

There is one piece of evidence that still remains and links Ed Gein to his crimes, a lock of hair fashioned into a keychain. The lock of hair rests inside a shadow box that Manon put together herself.

“When I was pinning the hair into the box, I could feel something hardened but gummy. I thought it was glue, but then hair would have fallen out…. It was piece of a scalp,” Manon recalled with a grimace.

Graveface returned upstairs and gave patrons more of a backstory to Gein’s legacy, mentioning “Texas Chainsaw Massacre,” “Psycho,” “It,” “Silence of the Lambs.”

“Nothing has influenced horror movies more than Ed Gein….These are real things that he did…The truth is so much sicker than what you see in those movies,” Graveface said.

Also within the room is the exhibit on young boy killer and “Pogo the Clown” John Wayne Gacy. While Graveface has been collecting work since the 90s, he now holds the world’s largest collection of Gacy paintings in one room.

One patron wandered around the room and said of Gacy, “He was insane…but he was talented.”

The Graveface Museum is open Friday-Sunday from 12-7 P.M. Admission is $20 for adults and $15 for students. Admission includes 24 hours of admittance so that viewers can come back two days in a row. For more information, please visit gravefacemuseum.com 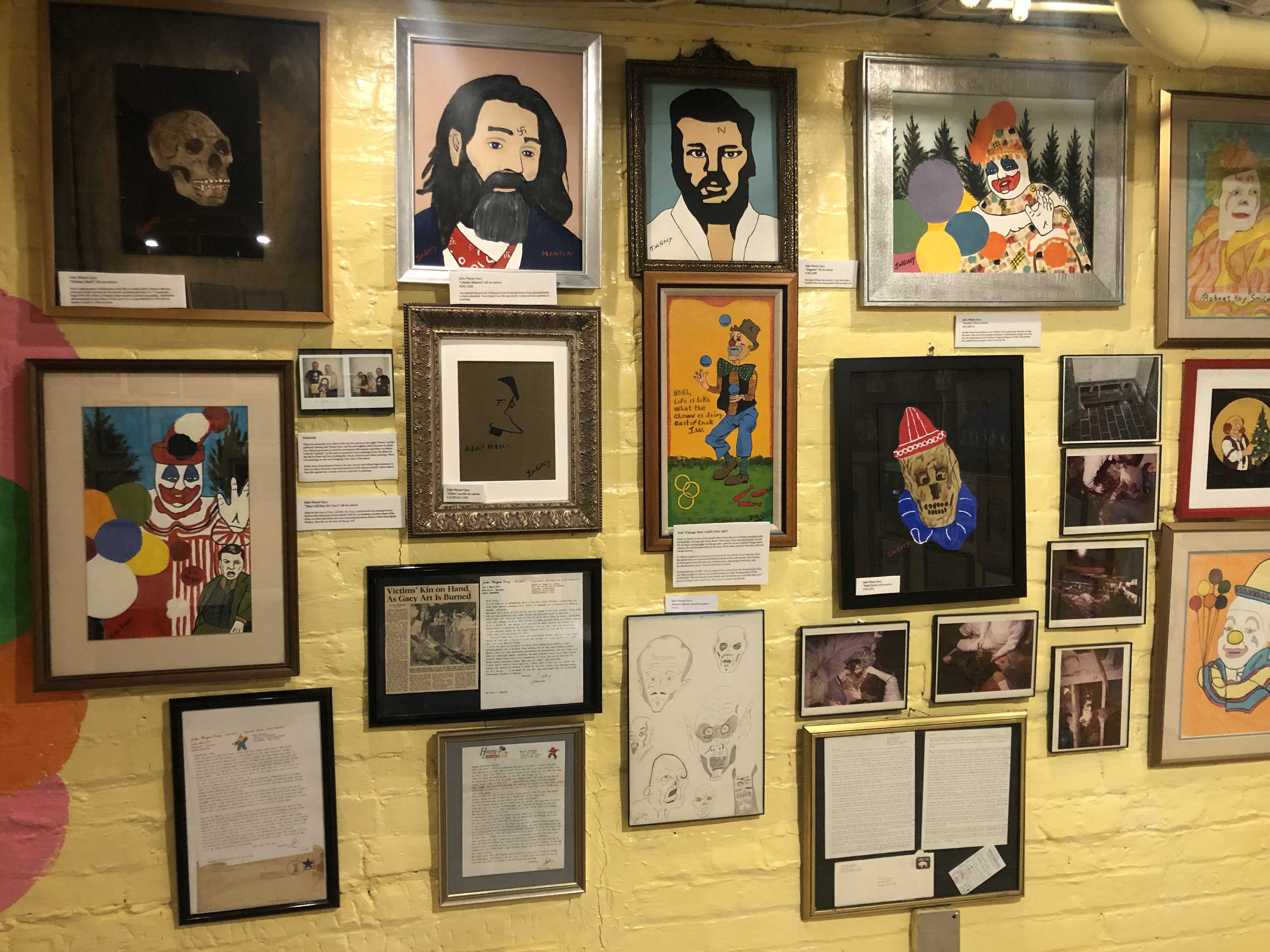 Pictures on the wall of the “Death Row Room” 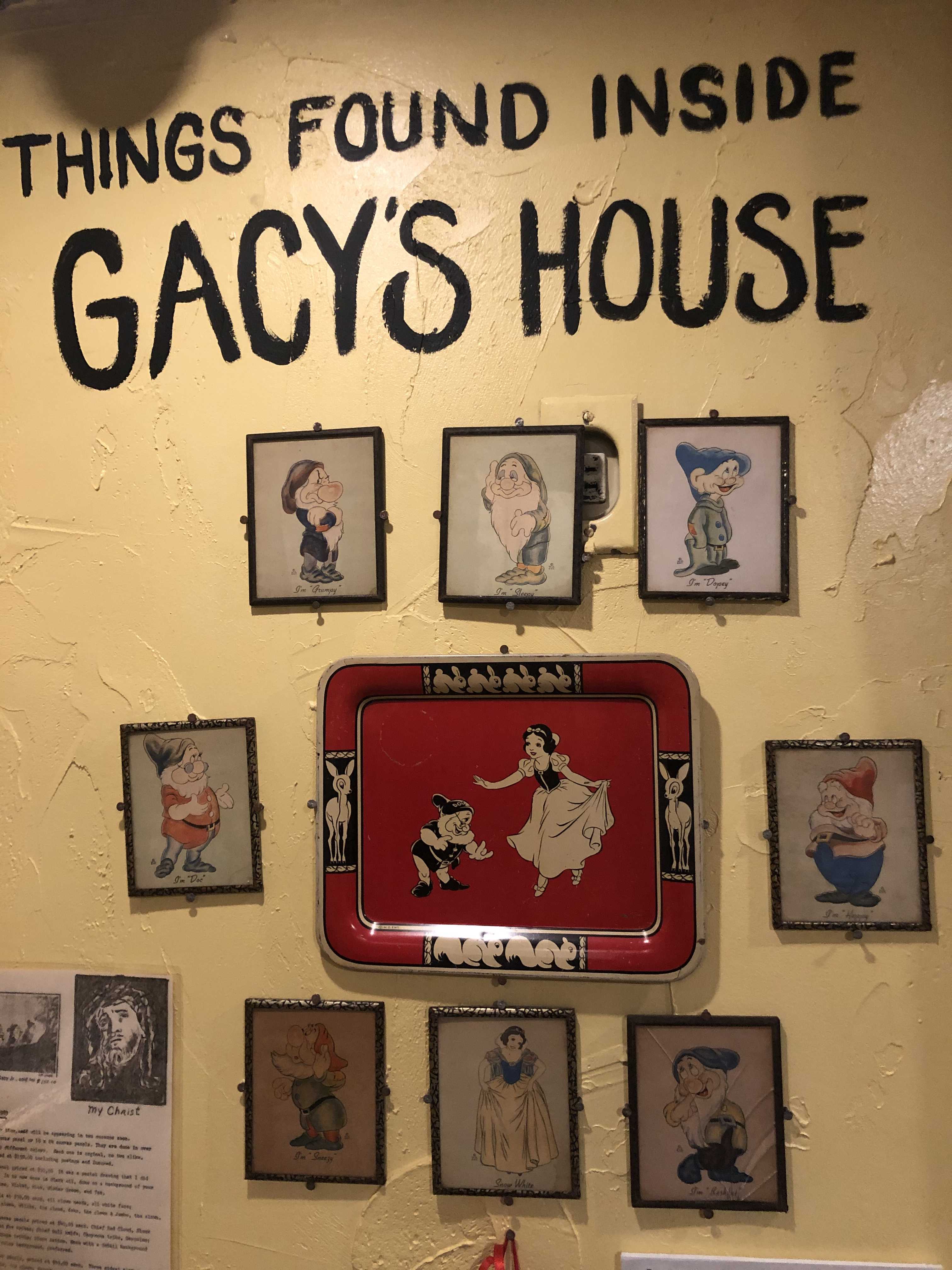