New Creek to be built in Statesboro 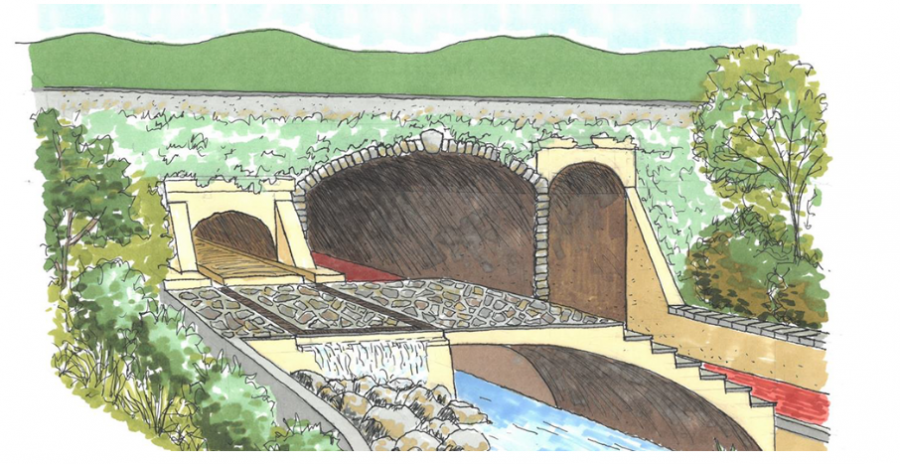 The Blue Mile Committee announced in December 2018 the “Creek on the Blue Mile” project, a development plan for a lake reservoir, creek and linear park in Statesboro.

The project will also include an entertainment zone and possibly bring new developmental interest to Statesboro.

Keely Fennell, co-chair of the Blue Mile Project, said the new project would allow up to 75 acres in the county to shed flood waters.

The heavy rain water that would flood around the area would instead flow into a designated reservoir that is built for the storm water surge.

With a central water source located near the Blue Mile, the area would be free from the effects of flood water build up and would be open for new commercial development.

Keely reached out to Andy Burns, one of the developers for the Market District construction project.

After asking Burns to meet and come up with some ideas, Burns referenced a project that was used to create Carroll Creek in Frederick, Maryland.

Carroll Creek was created in order to help control the adverse effects that the city’s 100-year flood plain had on their community much like Statesboro.

Today, more than $150 million in private investing is underway or planned in new construction, infill development or historic renovation along the park according to the City of Frederick’s website.

Burns plans to use the drainage ditch that runs under South Main and use the concept of Carroll Creek’s success as the projects main prototype.

Currently the committee has spent the last 12 to 14 months in the financial and planning stages of the construction process.

The “Creek on the Blue Mile” project has many potential obstacles such as the project corridor crossing main roads including South College Street, Norfolk Southern Railroad, South Main Street, Fair Road and Zetterower Avenue, according to the feasibility study. The project also requires property acquisition and may have potential utility concerns.

Despite these difficulties, the project could yield even greater opportunities and benefits according to the study. The developmental land that will be reclaimed will allow an influx of businesses, investors and recreational development to help connect historic downtown Statesboro to Georgia Southern University.

The process to get the project running began when Fennell and Darron Burnette became partner co-chairs of The Blue Mile Project, which started in 2012. In the process of achieving this goal, Fennell and Burnette decided on entering in a competition called America’s Best Community.

The contest was built around the city’s ability to show the potential for community revitalization impact while also leveraging the individual communities resources, talents and other assets to achieve progress within the 11-month period. By demonstrating those qualities of Statesboro, the Blue Mile committee was able to secure $1 million of funding for the project.

“We get back to Statesboro with $1 million and we think how can we make a difference on a Blue Mile with a million dollars,” Fennell said. “Now, $1 million seems like a lot of money but in really it’s not that much money.” Fennell said.

The Blue Mile Committee then made a request for any help that Governor Nathan Deal could give and ended up gaining a gift of $5.5 million to build a park and reservoir.

Fennell and Burns said they were both very grateful when Governor Deal also agreed to give a low interest loan to the city of 2 percent or less for 30 years for a balance of $15 million which could be used along with designated storm water funds and for the rest of the “Creek” and The Blue Mile.

“So all of a sudden we have a loophole of money that we are grateful for the governor’s office for and now we have a creek in progress,” Fennell said.

The funding for the linear parks will come from the money made from the purchase from creek front lots to business owners, investors and residential developers. Andy Burns said that this is possible due to the premium pricing that comes with creek front property.

In addition, the “Creek on the Blue Mile” project will come to no cost of the local taxpayers and increase the tax base by $100 million in the planned area development. Mayor Jonathan McCollar said the project will bring in an additional 750 jobs to the area.

McCollar said the main way that the Blue Mile Project will affect students of Georgia Southern will be the improvements on the quality of life.

“It’s gonna benefit the community as a whole,” McCollar said.

McCollar also said that the project is as geared towards students as it is to the entire Statesboro population. McCollar and Fennell both said that one of the main missions of the Blue Mile Project is to bring in outside interest and tourism to Statesboro.

“I hope it becomes a destination where people from Savannah want to get away from the hustle and bustle of city life and come spend their money and tax dollars here in Statesboro,” Keely said.

The project is still in its planning and engineering phase and will likely not start construction until 2020.