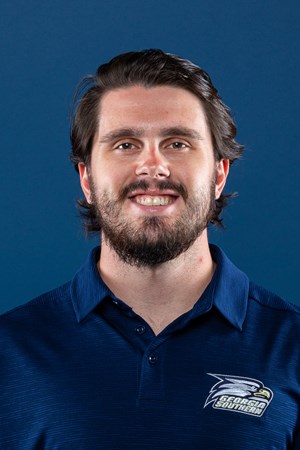 Just around six months ago, Miller Mosley had given up football and was just weeks away from entering the workforce. However, when the COVID-19 virus took over the world as we know it in March, Mosley’s plans were completely derailed.

After talking with his parents and close friends, Mosley decided one more season of football and the opportunity to enroll in a graduate program was worth considering. Shortly thereafter, the former Wofford quarterback found himself in contact with Georgia Southern recruiting coordinator Victor Cabral.

Mosley, a former co-starter for the Terriers, knew from the beginning that he was not poised for a major role with the Eagles.

“It’s Shai’s show. JT had a suspension early on in the year. I would be here for depth purposes and in return I would be getting my master’s,” Mosley said about Coach Cabral’s pitch for him to come to Statesboro.

For the first 11 weeks of the season, Mosley would see almost no action. In fact, he only completed one pass for nine yards, which came in the season opener against Campbell.

However, Mosley would see a much increased role after the Eagles’ Nov. 28 game at Georgia State. Starting quarterback Shai Werts was lost for the remainder of the regular season after suffering a shoulder injury.

Despite Werts’ injury, Mosley was still slated as a backup to Justin Tomlin, who would lead the Eagles to a convincing victory over Florida Atlantic. Headed into the season finale against bitter rival Appalachian State, many Eagle fans had high hopes for Justin Tomlin and what the future may hold.

Those dreams were quickly put on hold after Tomlin suffered a leg injury that would require season-ending surgery. The next man up was none other than Mosley.

Mosley was thrown into the Deeper Than Hate rivalry with a ten-point lead and a crowd of rowdy Georgia Southern fans behind him. Mosley performed well under the circumstances and he finished the game 5-for-14 passing for 122 yards, a touchdown, and two interceptions.

“I hate the way the game turned out. I obviously would like to win the game, but it is what it is. Hopefully, we finish on a good note and win the next one,” Mosley said when talking about his performance.

Despite still battling an injury, Werts may still get the nod for the Eagles on Saturday. However, Mosley is preparing as if he is the starter for Wednesday’s matchup against Louisiana Tech.

Mosley confirmed just one thing when The George-Anne spoke to him: The 2020 season would be the end of his football career.