After a tumultuous season, Georgia Southern goes out on top 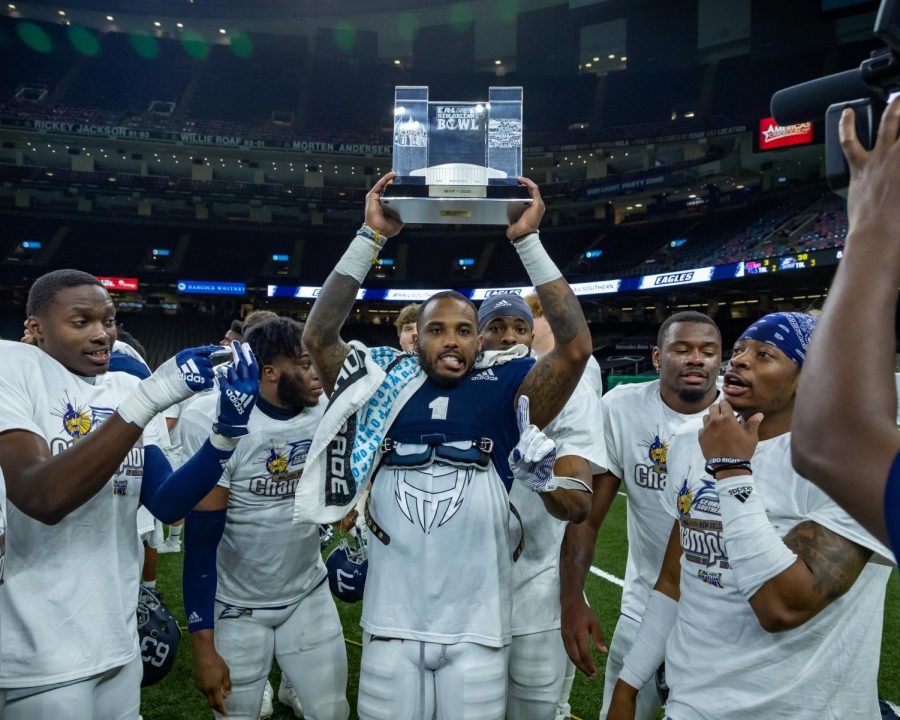 Cancellations, postponements, and crucial injuries are just a few of the things that the Georgia Southern football team fought through in the 2020 season.

However, on Wednesday, the eventful 2020 season would come to an end. Georgia Southern played a near-perfect game to take down Louisiana Tech in the R+L Carriers New Orleans Bowl, 38-3.

Shai Werts, listed as a game-time decision, had no clue if he would even take the field today. 30 minutes before kickoff, Werts would lead the Eagles out yelling words of encouragement. That is when Eagle Nation knew QB1 was back.

“He never really said it to me. I hear him talking to our guys about ‘Hey, we’re about to go do this!’ And right then I was like, he’s gonna play,” head coach Chad Lunsford said about when he knew Werts was going to play.

Werts exceeded any expectations Eagle fans could have had before Wednesday. With a shoulder injury he had been nursing all season, Werts threw for 126 yards and a touchdown. QB1 was also effective on the ground as he rushed for 71 yards and 3 more touchdowns.

Scot Sloan’s defense played their best game of the season on Wednesday. Not only did they hold Louisiana Tech to just 232 total yards, but they snagged four interceptions in the process.

After Wednesday’s dominant defensive performance, the Eagle defense currently leads the nation in forced turnovers with 26. Despite offensive struggles this season, the defense has continued to play at an elite level.

Despite finishing with a record of just 8-5, the Georgia Southern football program has shown more heart than anyone else in America. As the only program to play 13 games, an 8-win season is rather special.

While the record may not be acceptable to some Eagle fans, this win should set up the program for unmatched success in 2020. So cheers to an eventful 2020 football season.