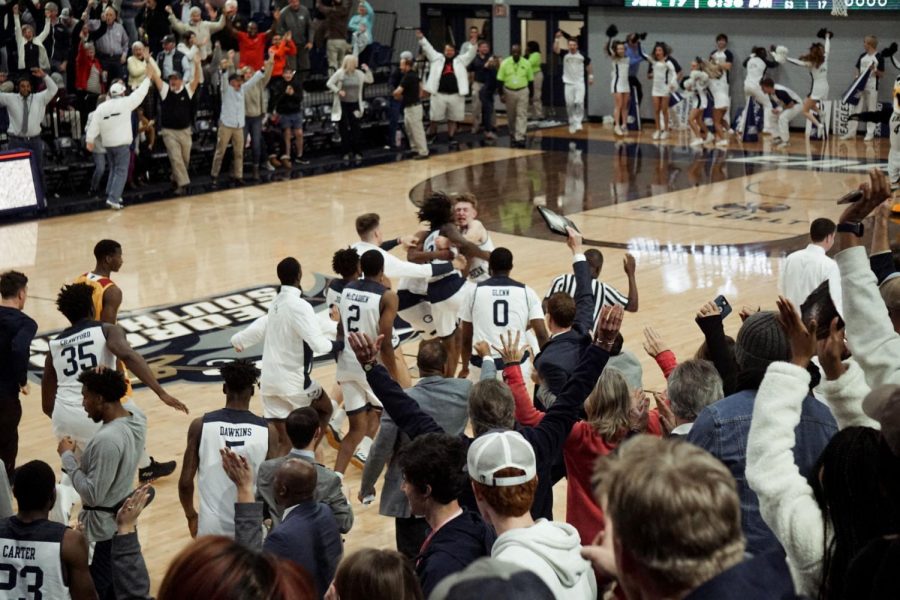 The team stormed the court after redshirt-sophomore guard Quan Jackson hit a last-second buzzer beater shot for the win over ULM last season.

In the first home conference game of the season, the Georgia Southern Eagles took down the ULM Warhawks 79-78, due to a buzzer beater by Quan Jackson- helping the Eagles improve to 10-6 overall, and 2-1 in the Sun Belt.

Quan Jackson has been in this position before, but with a different outcome.

Last New Year’s Eve in a close game against South Alabama, sophomore guard Quan Jackson was in this exact same predicament. It was also an early season conference game, and the Eagles had a huge second half and ended up closing a deficit right there at the end of the game. The ball ended up in his hands, but that time he didn’t make it. He didn’t make that special, game-winning buzzer beater shot. Fast forward to this game, and he makes it with no problem. That doesn’t mean he wasn’t nervous though.

“I was just thinking, hopefully, I make it,” Jackson said. “I prayed to God during the timeout before and I just let it go.”

GS struggled offensively in the first half.

Shooting just 38.5 percent from the field and a staggering 20 percent from the three, the ULM defense really held down the offense during the first half. The Warhawks set the tone very quickly, and GS never got a lead until the last 49 seconds of the game.

When asked what this win means to him, Coach Byington responded, “The players win games, so this is all about me just being a part of it.”

While GS is his first head coaching job, Byington is no stranger to coaching. He served as an assistant coach for seven years at College of Charleston under Bobby Cremins and led the Cougars as an interim head coach to a 7-4 record. GS is now 100-78 overall under Byington’s regime.

Tookie Brown decided to pass instead of attempting the shot to tie the game.

In addition to leading the team in assists tonight, Brown was the playmaker behind the game winning shot.

“You put the ball in Tookie Brown’s hands and let him make the decision,” Coach Byington said. “The play was to give him space so he could read the help.”

Brown finished the game with a team high 22 points, 7 assists, and 3 rebounds.

The offense was more effective when they became more aggressive and went straight to the hole.

In the first half, there were multiple shot attempts from the three by many GS players but very few of those shots actually went in. At the beginning of the second half, Brown found his rhythm and started going right to the hole. This shocked the ULM defense, and this aggression slowed their offense to 37 points the second half, compared to GS’ 49 second half points. Montae Glenn quickly followed suit and changed his game, finishing with 10 points and 6 rebounds.