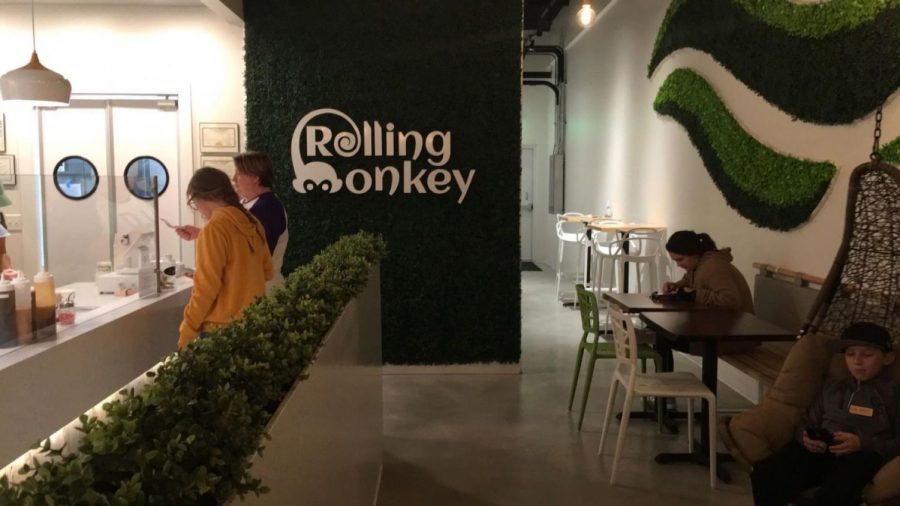 Rolling Monkey founders Garrett and Meagan Clark prioritized the interior to ensure the establishment provided people with an engaging, exceptional experience when they walked through the doors.

The inside of Rolling Monkey corresponds with the environment of an exotic jungle. The prominent colors are dark green and brown. There is a large bulk structure of a wooden tree in the center of the establishment and what is intended to resemble green grass patches lining the walls.

Owners Meagan and Garrett Clark prioritized the interior to ensure the establishment provided people with an engaging, exceptional experience when they walked through the doors.

There are swinging chairs that hang from the ceiling. The chairs resemble the structure of a banana and provide customers with a playful, relaxing swing while enjoying the delicacy of their rolled treat.

“We spent a lot of time on each of the five senses. Our primary measure is the feeling and the mood that you have,” co-owner Garrett Clark said. “It’s not necessarily the money. While that is important to us, it’s, ‘How did you feel when you first came here? And, how did you feel when you left?’ We want to bring positivity, in whatever form that may be. For me, that’s the biggest value that I see in what we can bring to others, along with an amazing product.”

Garrett Clark, of Camden, Georgia, and his wife Meagan Clark, of southern California, co-own Rolling Monkey and are graduates of Georgia Southern University.

The couple founded Rolling Monkey on four core values they adopted from the book,

“Ikigai: The Japanese Secret to a Long and Happy Life.”

They did something that they loved.

They did something that gave back to the community.

They did something that they got paid for.

They did something that they were good at.

“A majority of people in the United States live in their profession, which only meets two of those criteria,” Garrett Clark said. “They’re good at it and they get paid for it.”

Meagan Clark was a special needs teacher and Garrett Clark is a process improvement engineer.

“Within the public school system, they keep you inside this box, and you have to abide by these rules, and these rules don’t always apply to the people who need it most,” Meagan Clark said.

Nearly two years ago when Garrett and Meagan were planning their wedding, their wedding planner introduced them to the growing phenomenon of rolled ice cream.

It was December 2016 in Savannah when they took a visit to their first rolled ice cream shop.

“We saw the line out the door and we were like, ‘What in the world?’” Garrett Clark said. “Who is getting ice cream when it’s freezing outside?”

The couple quickly realized that it wasn’t just the ice cream people were there for. It was the satisfaction of watching the handcrafted experience of the rolled ice cream being prepared.

Garrett and Meagan Clark enjoyed the engagement of people taking time to interact with one another as opposed to the typical “grab-and-go” mentality many dining experiences provide. The couple admired the feeling that, for one moment, things were not being rushed.

“The beautiful things that we liked about it was the engagement that we felt, “ Garrett Clark said. “We were kind of forced to mingle and talk with people. Today, most people are so habitual in their routines, their day-to-day activities.”

The couple then discovered that they not only wanted to provide other people with the captivating experience of rolled ice cream, but also with the idea of opening a rolled ice cream shop that would fit perfectly into the four core values they adhered to from the Ikigai book.

During their honeymoon in 2017, the couple decided to plan the opening of their very own rolled ice cream establishment.

“On our honeymoon, I remember he looked at me and was like, ‘We’re about to go into our first year of marriage, but baby, we can do this. We can open a business together,’” Meagan Clark said.

The couple was apprehensive about the expenses of founding a business, but they were excited and certain it would bring fulfillment into their lives.

Why the name Rolling Monkey?

However, a potential investor advised the couple that the name was not a suitable fit for the business.

“At first, the ego was like, no, our name is great, I don’t care what you say, it’s awesome,” Garrett Clark said.

The couple was hesitant to change the name. After some thought and further consideration, however, the couple agreed that “Cold Roll Creamery” was not exciting.

“It means a lot to us because we know the meaning behind it, but for someone it might not be memorable,” Meagan Clark said.

Garrett and Meagan Clark had every intention of continuing to apply the personal appeal to the name of their business. They were both sure of the fact that they wanted to somehow include their son’s name into the brand of the business.

“We kind of started thinking about how we can still incorporate Connor into the name so it still has that special place for us, but how can we also make it fun,” Meagan Clark said.

“I can’t go to Walmart or Target or anywhere without them making monkey calls. Running up and down the aisles screaming like monkeys,” Meagan Clark said.

The couple decided to name the business “monkey” and then accompanied the word “rolling” alongside because the business sells rolled ice cream.

They were satisfied with the name because it was unique and still included the idea of their son Connor.

How the flavors were chosen

Meagan and Garrett Clark have traveled the nation to more than 50 different ice cream locations, gaining experience of how to roll ice cream and learning about various flavors of ice cream.

“We’ve worked with owners to allow us to get in there and roll. At first it was tough, but once we started getting our roll on, it’s very therapeutic in a way,” Garrett Clark said.

After learning the technique of rolling, Meagan Clark and her best friend, both teachers at the time, spent an entire summer testing different flavors.

The couple purchased a cold rolling station for their home. Meagan Clark and her friend would try to roll anything possible, from cookies to cakes to coffee creamers and candies.

“That’s been one of the most exciting parts, just playing around with different ice cream flavors,” Meagan Clark said.

Anything that Meagan Clark considered rollable, she would attempt to incorporate into ice cream.

“We would go out to eat for a date or something, and I would say, ‘Don’t finish that. Let’s go roll it in ice cream,’” Meagan Clark said. “I tried potato chips. We just had fun.”

The couple narrowed the flavors down to 12 choices by having a menu-tasting party at their home. Friends would try different flavors and would vote on the best tasting flavor as well as the best name to accommodate the flavor.

The two most popular flavors are “Cookies and Dream” and “Not Your Mama’s Cheesecake,” but Rolling Monkey has 12 specialized flavors of rolled ice cream on their menu. All flavors are prepared and rolled to order. After the ice cream is rolled, customers then have the option of choosing from a variety of syrups and toppings to add to the top of their delightful sweet treat.

The Future of Rolling Monkey

Garrett and Meagan Clark have discussed opening another location and possibly starting a franchise.

The couple wants to ensure that rolled ice cream is not just a “trend” and that the demand will constantly be available to support expanding their business venture.

“We’re taking our time with it,” Garrett Clark said. “We have discussed it potentially taking off and if the demand is there and people like our concept, we are open to working with others and franchising.”