Why Howl’s Moving Castle Should Be Your Favorite Miyazaki Film 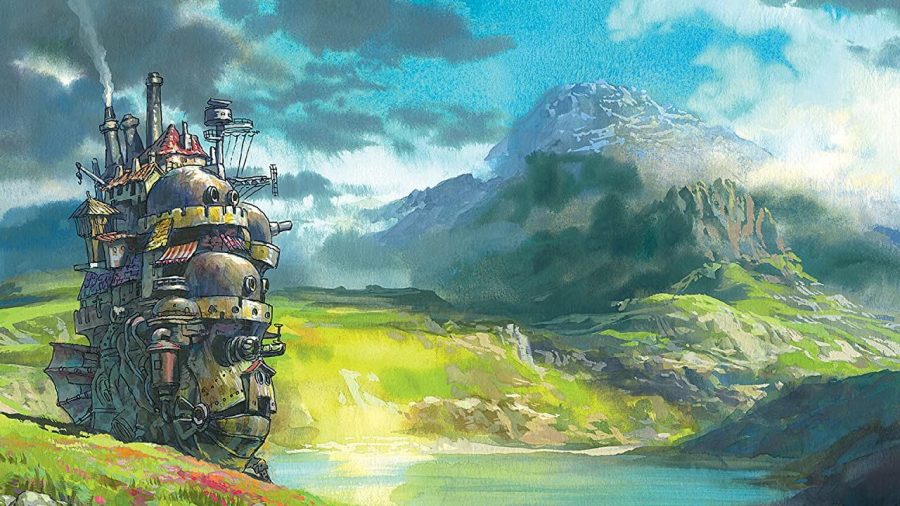 This is an entire article about why I love “Howl’s Moving Castle (HMC)”, by the amazing Hayao Miyazaki. I have watched it so many times, and each time it is like I find one more character trait, beautiful animation, or witty one-liner to fall in love with.

The most popular Miyazaki film is “Spirited Away”, but HMC is a fan favorite, and a film I can go on and on raving about. It was so easy to fall in love with the film, especially if you break down different aspects of the movie. It’s not hard to imagine that the great Hayao Miyazaki created a film as outstanding as HMC. I am going to talk about the characters, symbolism and animation that make the film nothing short of a masterpiece.
The Characters
I think talking about the characters and how they evolved throughout the film, and what they were able to contribute is a great place to start off. The main characters are Sophie and Howl… and maybe Calcifer (who doesn’t get as much screen time as he deserves, in my opinion). Viewers are first introduced to the stellar heroine as she is a hat maker, who seems to be a people pleaser who wants the best for those around her. While it takes a few minutes for Howl to be introduced, viewers hear the salacious rumors about the mysterious wizard before he’s onscreen.

Within the first 15 minutes of the film, viewers must then get used to Sophie as a ninety-year old woman, since she was cursed by a witch out to get Howl and all those connected to him, it seems. Howl is first seen as he escorts Sophie away from two creepy guards and quite literally sweeps her off her feet before her cruel transformation.

Once Sophie becomes an old woman, it’s almost as if she becomes more expressive and honest with what she thinks and what she wants to do. She is quick to deny any aid from those that just perceive her as an helpless grandma, and holds nothing back when she finds herself inside Howl’s moving castle. She bargains an alliance with Calcifier, the witty fire demon behind all of the power/energy needed for the castle, who moonlights as the literal protector of Howl’s heart.

Throughout the film, you see mini shifts of Sophie, where she reverts back to her true self in moments of wonder, concern and passion. Viewers see Sophie become more and more independent, sure of herself and secure. The best part is, it is not because of her male counterpart Howl, or even Calcifer. They don’t see her as someone who needs to be fixed, nor try to convince her that she’s worthy of love solely because Howl loves her, etc. Sophie becomes a better person because she decides to, because she realizes her strength and her beauty, independent of what others may think. She is even the one to break her own curse, not a true loves kiss or a wish from a wizard.

Howl on the other hand, is quite the dependent character. From the very start, viewers see that Howl is quite immature and hopes those around him will adjust their lives to best suit him. He cannot survive dependent of Calcifer, and looks to the supporting characters to carry the consequences of his actions. Sophie does often help Howl, even if it is at the expense of her peace of mind, but she also lets him know that he is irresponsible, cowardly, and disappointing as a wizard at times. Howl accepts all of this, and slowly throughout the two hour adventure, he tries to become better, better for Sophie. I really admired this version of the usual romantic tropes. Sophie is always viewed as the one worth changing for, Howl is quick to take any and all of her criticisms. Sophie is truly in control throughout the movie (…. minus the curse she is battling, but hey it’s a magical story and everyone has a curse of their own, it seems). Yes, the two end up falling in love at the end of the movie, and yes it is predictable, but it does not feel fruitless. Every time I watch the film, I find myself honored to see the two characters develop into something more.

Who some might call the comic relief of the film, Calcifer does so much more than that. Calcifer has great one-liners, sure, but his power and heart shows in the movie, and compliments the other characters so well. He finds himself caring so much about Sophie. Even when he is at his weakest, he is willing to try and save them during a bomb attack, for Sophie. Calcifer will have you chuckling in one scene, and then sympathizing with his plight of never-ending work in the next.
The Visuals
Miyazaki is known for his beautiful animation, but he is on a whole other level in HMC. The visual architecture of the ‘moving castle’ is so intriguing, and every time it is in frame, viewers could find a new, peculiar feature to admire. Howl himself goes through frequent transformations into a winged creature and a slimy depressed being in the film. What is truly beautiful, are the scenes that involve the stars and the sky, specifically the flashback to when Howl consumes a falling star, it’s breathtaking.

One of my favorite things about the cinematography in this film is how vibrant and colorful they it is. Even the darkest colors are portrayed as rich pools for the imagination, the castle itself is far from a rainbow but the movement and the complementary nature of the color schemes bring it to life. There is a scene where everyone ‘moves’, which is really when Howl and Calcifer use their awesome power to transform the castle. Viewers see new windows and furniture pop up, while the walls are magically painted and designed, with colorful sprites all around.
The Symbolism and Themes
Miyazaki is known to not separate his personal opinions from his films, and HMC is no different. There is big anti-war sentiment in the film, and it’s not hard to side with Howl as he tries with all his might to avoid serving for his magical master in the ongoing war. He eventually stops running away, for the sake of Sophie. Although, it’s made clear that he despises the violence and hatred that comes with war. Though, the symbolism is not always alluding to ideas and opinions. The mystical and alluring ‘moving castle’ is a not-so-subtle representation of Howl himself. A beautifully chaotic, disorganized yet enchanting beast. The magic portals that whisk the characters away with a turn of the doorknob also represent aspects of Howl. There is so much to learn about each of characters, and in places where you might not expect it.

All of this, is to say, Howl’s Moving Castle is the most beautiful movie I’ve seen to date. If you haven’t seen it, I hope you give it a chance.