Shy but electrifying: How a freshman from California is finding her groove at GS 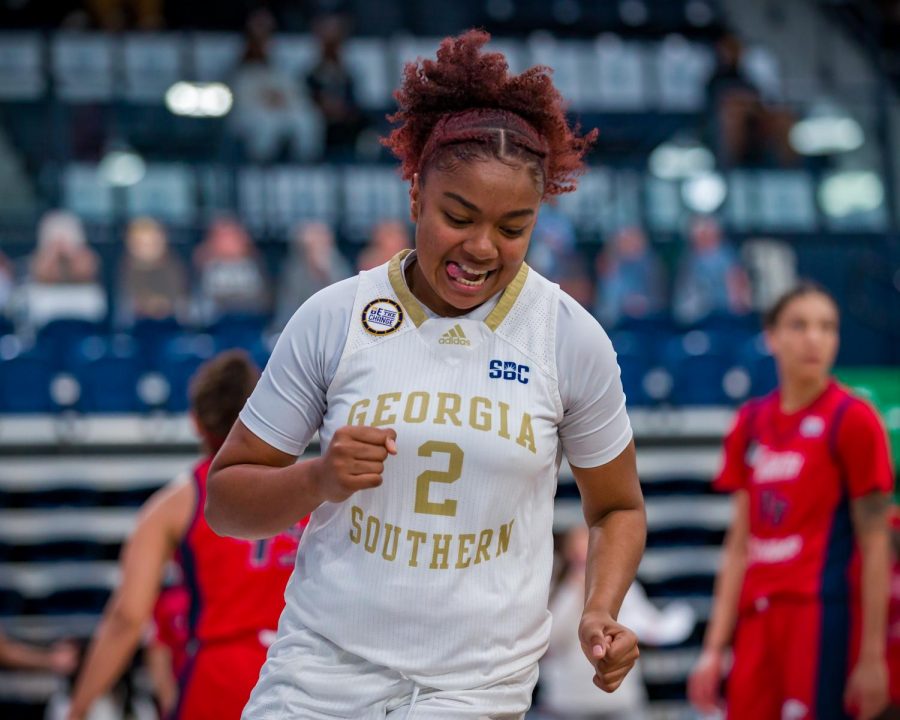 Over the course of the 2020-21 basketball season, Eagle fans have watched Daeja Holmes develop into one of the most exciting women’s basketball players in recent memory.

Through just 18 appearances as an Eagles, Holmes averages over seven points and 1.3 steals, while shooting nearly 40% from three-point range.

‘It happened through social media’

While she doesn’t open many of these links, the tape that Holmes’ AAU coach sent caught Howard’s eye.

“I saw this highlight of some little girl playing basketball. I hit him back immediately,” said Howard, “I watched the first five minutes of a full game and I was like we had to get her on the phone.”

Despite telling her staff that she did not want to take any other freshmen, Howard knew she had to go back on her word. Holmes was just too special of a player to pass up on.

On April 27, 2020 more than two months after Holmes’ senior season concluded, she was offered by GS, her fourth Division I offer in just one day.

Once receiving the call from coach Howard, Holmes knew that Georgia Southern was the place for her.

“I always wanted to live in Georgia, that’s the funny thing,” said Holmes, “I always told my mom that was the first place I’ll ever go. Once she called me and I talked to her, I knew it was the perfect fit.”

After missing a potential-game winner against South Alabama, Holmes was one of two players selected to represent the Eagles in the postgame press conference.

Holmes mumbled her way through one of her first media sessions, fighting back emotions with every answer.

While she tends to be quiet and shy off the court, Holmes is nothing short of electrifying on the court. After draining a three, Holmes almost always pulls out some type of celebration.

“She has an alter-ego,” said Howard, “On the court she’s Hollywood, we call her ‘The Logo’. Off the court, she’s a shy salad.”

While on a smoothie run one day, Howard recalls Holmes telling the drive-thru employee,  “Remember my name.” This interaction perfectly encapsulates the quiet confidence of Holmes.

Although Holmes has been extremely successful as a freshman, she has yet to start a game due to the presence of more experienced players on the Eagle roster; however, it should only be a matter of time before Holmes takes on an even bigger role.

Until then, both Holmes and Howard agreed that the youngster needed to improve on the defensive end. Holmes may score a lot of points, but she also gives up a considerable amount.

Right now, Holmes will remain the spark of offense on the Eagles bench and will give Eagle fans something to look forward to in the remainder of the season.