Six Saturday home games highlight the 2021 slate for the Eagles 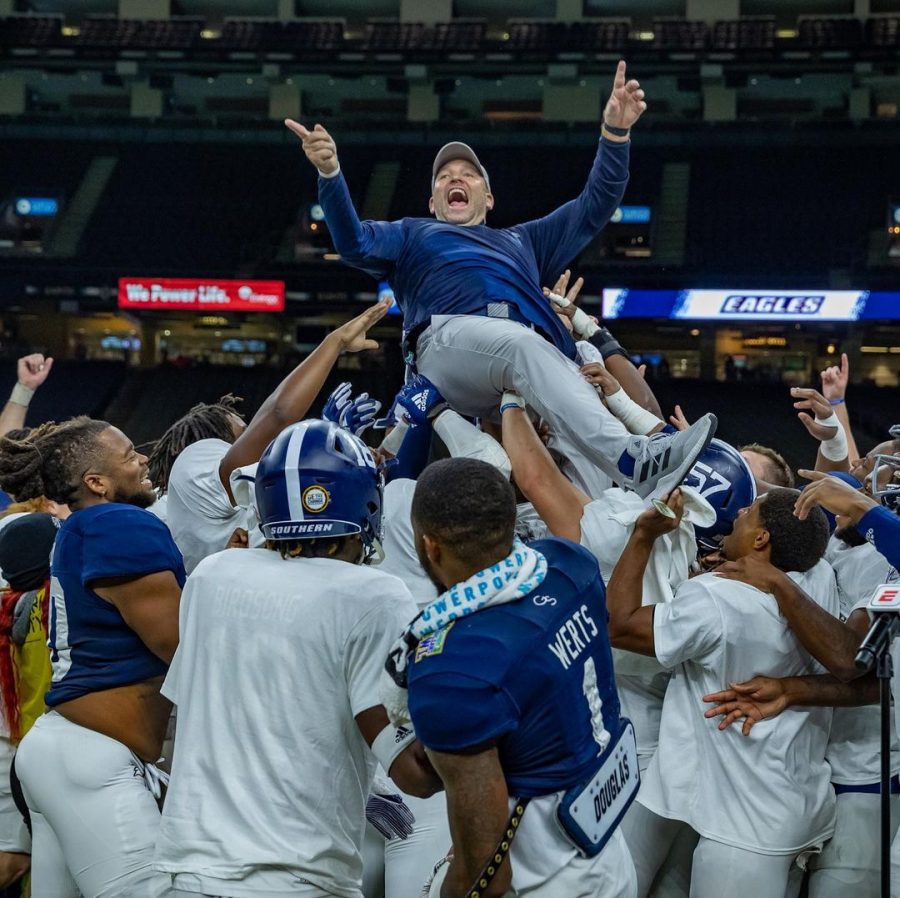 On Monday, Georgia Southern announced the schedule for the 2021 football season.

The Eagles open the season with two non-conference opponents. On Sept. 4, FCS Gardner-Webb will travel to Statesboro. The Eagles hold a 2-1 series lead over the Bulldogs, with the most recent game resulting in a 56-0 GS win in 2002.

On Sept. 11, the Eagles will travel to Boca Raton to take on the Florida Atlantic Owls. The two teams met for the first time in 2020 as the Eagles took down the Owls by a score of 20-3.

The highlight of the 2021 schedule is the Sept. 18 trip to take on the Arkansas Razorbacks out of the SEC. The Eagles were supposed to take on an SEC opponent last season in Ole Miss, but the game was cancelled after the SEC moved to a conference-only schedule.

The Eagles close out the month of September on the 25th with a home game against 2020 Sun Belt co-champion Louisiana. The Ragin’ Cajuns are one of three teams the Eagles will host that finished in the final top-25 poll in 2020.

To open October, the Eagles will host Arkansas State on the 2nd. The last time the Eagles took on the Red Wolves in 2019, the game resulted in a 38-33 loss for GS.

The Eagles will travel to Alabama to take on the Troy Trojans on Oct. 9. GS took down the Trojans 20-13 in Paulson Stadium last season.

On Oct. 14, GS will travel back to Alabama to take on the South Alabama Jaguars. The Eagles are currently undefeated (7-0) vs the Jaguars all-time.

To close out October, the Eagles will host bitter rival Georgia State. This year’s game is a welcome surprise to many Eagles fans as the game normally takes place in late November.

On Nov. 6, GS will host Sun Belt co-champion Coastal Carolina. The Chanticleers are the second of three opponents that finished the 2020 season as a ranked team.

GS will travel to San Marcos to take on the Texas State Bobcats on Nov. 13. The Eagles have won four straight games against the Bobcats.

In the last game before Thanksgiving, GS will host Brigham Young University (BYU). The Cougars are another one of the three Eagle opponents that finished the 2020 season within the final top-25 poll.

To close out the 2021 season, GS will travel to Boone to take on another big rival, Appalachian State. This is the second time ever that the Eagles will close out the regular season against the Mountaineers, with the only other instance coming in 2020.

For the fourth season in a row, the Sun Belt is split into two five-team divisions. The winner of each division will advance to the Sun Belt Conference Championship Game on Dec. 4, which will take place at the home stadium of the higher-ranked team.