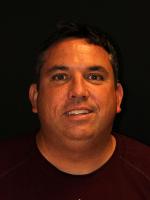 McCaffrey was a self-described “jock” in his small high school, playing multiple sports and spending as much time competing in any athletic arena he could.

“In the fall I played golf, and even went to a number of football practices in case they ever needed someone,” said McCaffrey, “I ran cross country, basketball in the winter, then in the spring played tennis, and even went out to a couple baseball practices.”

Sean would eventually find his niche in tennis, both playing and coaching. After his collegiate career was over, McCaffrey got his first coaching job in a Rhode Island high school from 1996-2004, when he was then hired by Division III Colby-Sawyer College in New London, New Hampshire. In five seasons his teams accumulated a career record of 40-18 with the men and a 60-19 career record with the women for an overall 100-37 record.

McCaffrey said, “I had a fantastic experience with everyone at Colby-Sawyer. Kids were great and it was just a really exciting experience.”

Eventually other schools started to notice and recruit Sean to lead their programs. After a few offers from various schools, McCaffrey chose Wright State, from Dayton, Ohio in 2008 and went on “I spent about six years there with their men and women and they had a fantastic administration, even better kids, and I was really surrounding myself with the best folks that I could have,” said McCaffrey.

During his time at Wright State, McCaffrey’s teams composed a record of 78-69 and his men’s team went from a record of 3-20 the year before he arrived to 14-10 just the next year and 18-4 just a year after that.

McCaffrey will now be following the most highly decorated coach in Armstrong tennis history in Simon Earnshaw.  He doesn’t shy away from that however.

“I’ve always loved a challenge,” said McCaffrey, “Frankly, the best thing I can do is just be myself. That means coming in, being positive, recruit my butt off, and make sure I’m bringing in the best student-athletes that will help support not only the tennis program but academic side, and if I do, good things will continue to happen.

The tennis program is returning several players on both the women’s and men’s team but only one current player, senior Clara Perez has experienced a National Championship. McCaffrey is determined to get back to the top.

“My goal every day when I step out of this office will be to make sure we did everything we possibly could to maintain and continue to gain ground towards winning a title every year,” said McCaffrey, “I don’t pretend to know everything about the sport,” said McCaffrey, “I don’t pretend to have all the answers. I’m very much a coach that likes to include the team in a lot of what I do. My style is not motivating by fear, but rather inclusion I think. When they feel they’re involved and part of the process, they know that the coach and the team has their back.”

If I had to guess, I would say McCaffrey will not have any problem convincing this group of athletes that he has their back.