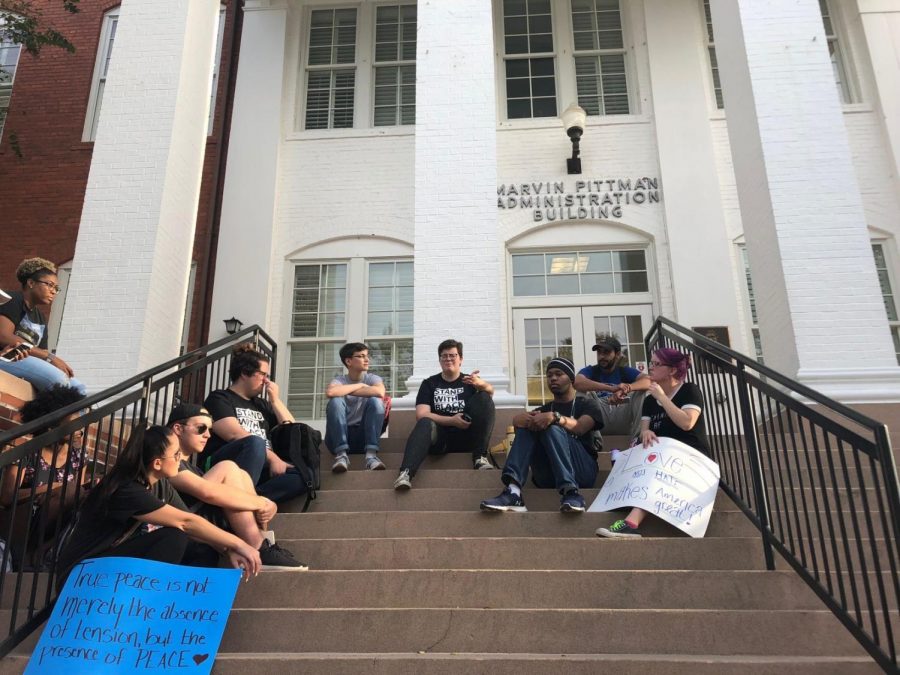 Students sit on the steps of the Marvin-Pittman Building while the march organizers meet with Nickel, Lewis and the university's lawyer.

Georgia Southern University students walked out of their classes on Thursday to participate in a protest sit-in at the Carroll Building Atrium.

The students later marched to the president’s office at the Marvin-Pittman Building to deliver an open letter of demands to President Shelley Nickel.

The march was co-organized by students Zachary Payne, Joshua Ahiakwo and Tyler Hicks, in response to the usage of the N-word in the “triggerish” incident over the summer and the recent allegations against professors Karen McCurdy and Rebecca Kennerly.

Students began filing into the Atrium around 11:11 a.m. GS faculty members had set up a stage and led discussions pertaining to bias and race.

“I felt it was very important that we come and support this,” Rogers said. “I teach from a social work perspective and one of the values of social work is fighting for social justice and institutional change.”

Sarah Rogers, criminal justice professor and guest speaker, recently compiled research on police brutality and rises in crime among people of color, which she presented at the assembly.

Rogers’ research mainly consists of statistics of the police’s unequal treatment of people of color and the LGBT+ community.

Saba Jallow, political science professor and guest speaker, discussed how, in a racist society, people may be “treated silently.”

The crowd of protesters left the Carroll Building Atrium and walked down the pedestrium, past the Rotunda and through Sweetheart Circle, ending on the steps of the Marvin-Pittman Building.

When on the steps of Marvin-Pittman, Ahiakwo read from an open letter that would be given to Interim President Shelley Nickel.

The open letter contained several demands, including a call for McCurdy and Kennerly to issue a public apology for promoting hate.

After speaking on the steps of Marvin-Pittman, Payne, Ahiakwo and Hicks met with Nickel, the vice president of student affairs Georj Lewis and the university’s lawyer.

Payne said after leaving the president’s office, he felt optimistic about the conversation.

“They seemed to show genuine care and understanding for the GS family and like they were trying to truly help us create change on our campus,” Payne said. “The next steps for us is to continue the conversation we started, not just with the president but between faculty, staff and students. Continue to work on open, honest communication between everyone.”

Of the 12 demands made in the open letter, Ahiakwo said the conversation only covered nine due to time constraints. Ahiakwo said there will be further conversations with the university to continue the dialogue on accomplishing the demands listed in the letter.

Although there is not a set date for the next meeting, Ahiakwo said he sees the meeting taking place sometime in November.

Nickel sent an email to the GS community Thursday evening in response to the protest, march and open letter.

Nickel said in the email:

“Today I met with a group of students who held a peaceful march on the Statesboro Campus. I continue to be impressed with the student leaders and how they are approaching tense situations with maturity and conviction. We had a meaningful and productive conversation. I heard their concerns and they heard that the University is taking their concerns seriously. We are a university that respects all people and values diversity and inclusion. As we work through these challenging situations together, it’s crucial we maintain a respectful posture and listen. Today was a positive step forward and we will continue the dialogue.”

McClain Baxley contributed to this report.