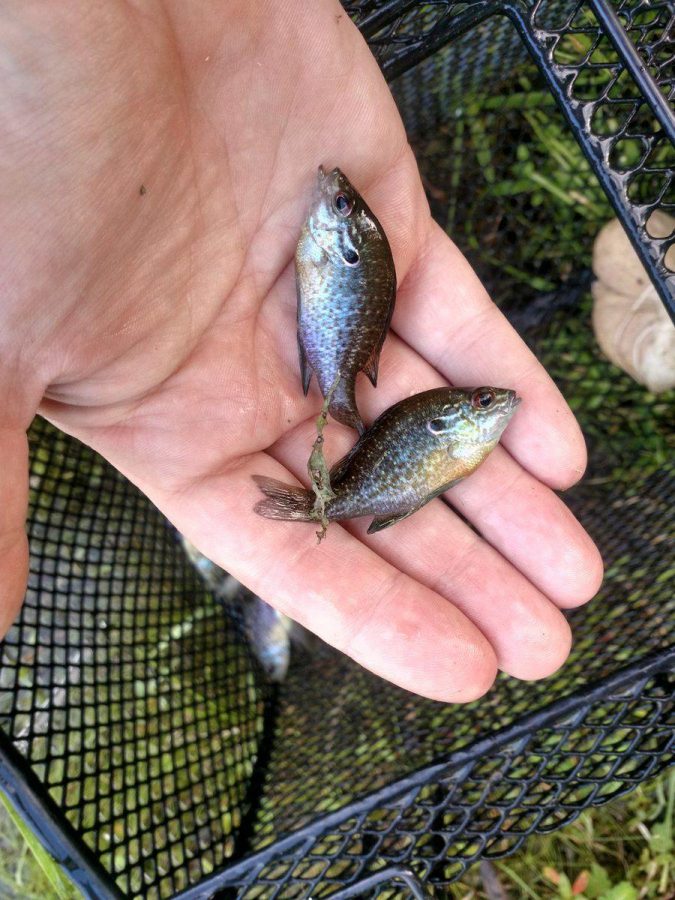 Two dollar sunfish found in the pond by the Education and Nursing/Chemistry buildings. The ponds on the Statesboro campus were dredged this past summer to clean them out and make room for more wildlife growth.

Georgia Southern University’s ponds are beginning to see a return of wildlife diversity in their waters.

The ponds on the Statesboro campus were dredged this past December to clean them out and make room for more wildlife growth.

“Dredging refers to removal and/or relocation of sediment from a channel, river, or lake,” Emily Kane, PhD, assistant professor of biology said in an email. “In ponds, like the ones on campus, this is done to allow the pond the space to continue accumulating sediment and prevent it from accumulating in other areas, such as drainage culverts.”

Before dredging, there were at least 19 species of fish present on campus, the most common being the Mosquitofish. Kane said that most of the fish found on campus belong to the Centrarchidae family, which includes sunfish and largemouth bass.

Some faculty and students from the Biology Department worked to sample the ponds before dredging began, observing species diversity and attempting to relocate some fish. All caught fish were relocated to the drainage area on the south side of Forest Drive near Lot 33.

After dredging, the diversity in the ponds is beginning to build back up, and the Biology Department is hoping to see more progress in spring of 2019.

“In spring, many of the pond’s residents may be more active, and therefore more likely to be encountered either visually or in traps,” Kane said. “Mosquitofish are one of the first fish to colonize a new habitat, but are still not present in Lakes Ruby and Wells.”

Kane said Mosquitofish, as well as redbreast sunfish and siren are some of the common species that will indicate the return of wildlife diversity.

More information about the wildlife that has been found on campus, as well as current observations, is available on the Georgia Southern Biological Survey iNaturalist page.