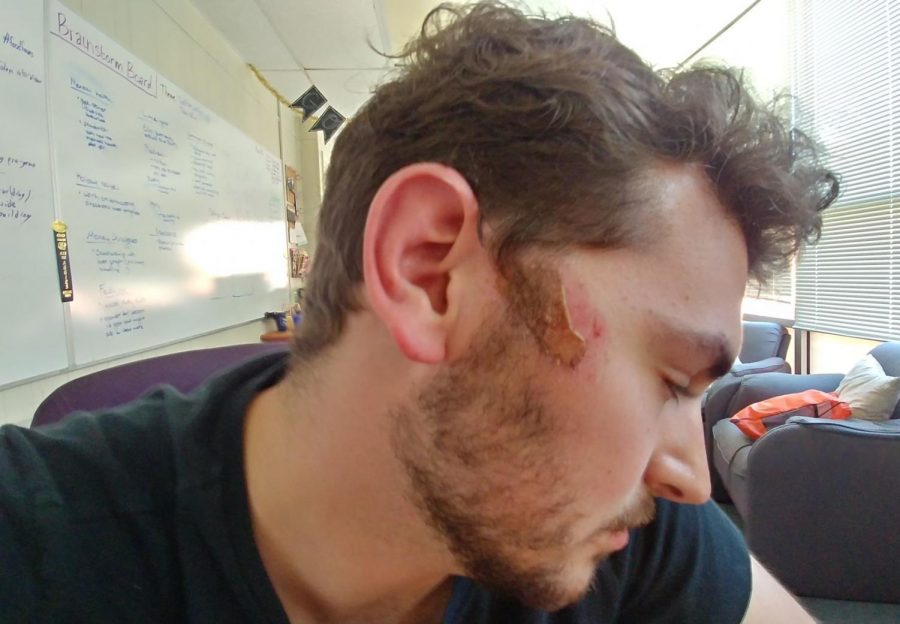 Brandon Wright, senior multi-media film and production major and student media member is one student to get hurt using a Lime product. Wright's injuries included scrapes to his hand and face and a fractured wrist.

Health Services had 28 patients with Lime scooter-related injuries since Oct. 1.

Robert Wright, senior multimedia film and production major and member of The George-Anne Media Group, was riding a Lime scooter to work when he had an accident.

“There was a pothole on Greek Row that was the size of my wheel,” Wright said. “It hit that, and I basically just launched a few feet and then skidded a few feet.”

His injuries included scrapes on his arms and head as well as an injured wrist of which Wright, at the time, did not know the extent.

Despite being injured and bleeding, Wright went straight to work following the accident. Health Services was closed during the time of his accident.

Wright went to Health Services the following Monday, where he received X-rays for his injured wrist, which turned out to be fractured.

“They referred me to an [orthopedist],” Wright said. “They were concerned with a tendon attached to the bone. That’s vital. I should be fine. It could be as simple as keeping this [cast] on. It could be as bad surgery. They said it’s according to the tendon.”

Wright said he can now move his wrist, though it’s painful when he moves it leftward.

Meghan Huggins, Lime operations manager for the GS campus, said in a previous interview that students should take their own safety into consideration when riding the scooters and bikes.

“[Lime] is not a helmet-sharing, we’re a scooter and bike-sharing, smart-mobility company,” Huggins said. “We do encourage people to follow the safety rules.”

Jan Southern, associate vice president of strategic communications and marketing for Georgia Southern, recently sent out an email on applicable laws concerning the use of Lime bicycles and electric scooters.

Below is a report from Health Services detailing the types of injuries substained by students. The report used the term ‘scooter’ in the search, and may not be directly related to Lime scooters.

The laws and safety tips are available on the Governor’s Office of Highway Safety website.