Eagles surge past Cougars in season-opening win over Carver College 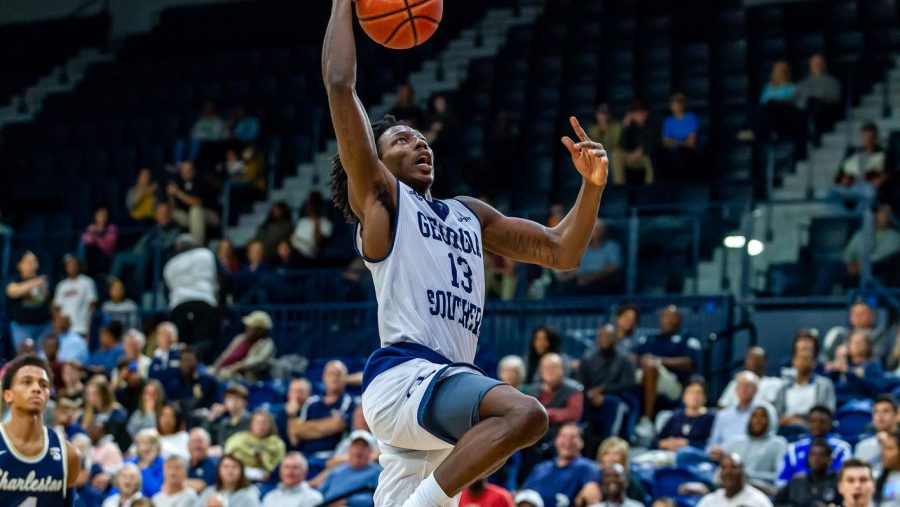 Redshirt-sophomore Quan Jackson led the Eagles in scoring with 25 points in the season opening win against Carver College.

Every now and then, the final score of a basketball game is not a good reflection on the overall course of the game, but the final from Hanner Fieldhouse on Wednesday night was simply not one of those games.

Georgia Southern won their season opener against Carver College by a final score of 139-51, in what was of the most impressive offensive outbursts in school history.

From the opening tip-off, to the final buzzer, the Eagles dominated every aspect of their contest with the Cougars.

“Everybody wants to win,” redshirt-sophomore Quan Jackson said. “We bring the game so much energy, and we all feed off of each other.”

Jackson wasn’t lacking any energy in his own right on Wednesday, as he put up a total of 25 points, the team high, and fell just one rebound short of a triple-double.

One Eagle who didn’t have any trouble collecting boards on the night was senior Montae Glenn. Glenn pulled in 10 rebounds on the night, six of them coming on the offensive side of the floor.

Glenn said that the team knew they held a large lead, but they did not want to waste an opportunity to get better.

“Even though the score gets high, we still have to play the right way,” Glenn said. And frankly, the Eagles in turn did do just about everything right, regardless of the score.

Head Coach Mark Byington was pleased with his team’s performance on the night, and really thrilled with the fact that everyone available on the roster was able to see some playing time.

Outside of the lopsided outcome, Byington took note of a lot of other positives his team revealed on the court.

“I thought we played really hard. I thought we shared the ball well, Byington said. “I thought we did things the right way, and watching our culture come together with guys being happy for somebody else’s success.”

The 139 points GS scored on Wednesday fell just one point shy of the school record for most scored in a single game, which game way back in 1955 when the team put up 140 against High Point. Since being a Division One team however, 139 is the new high, topping the mark set in 1974 against in-state rival Georgia State.

It can’t be expected for the Eagles to put up offensive numbers like they did against Carver every game, but Byington feels the talent the team has will propel their offensive performance to be very good on a nightly basis.

“We are gonna play fast,” Byington said. “We are built for speed.”

With an up-tempo offense, and a handful of players still sidelined with energy, expectations are gradually increasing for GS in 2018.

The Eagles’ next game will be against George Mason on Tuesday, November 13, from Hanner Fieldhouse.