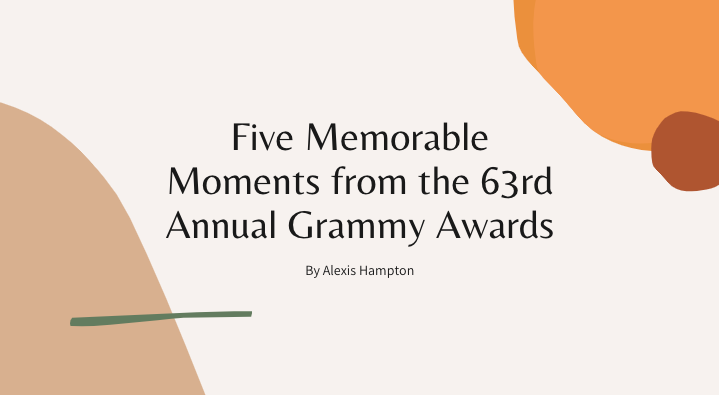 As usual, the Grammy Awards were a night to remember. I know we were all wondering what it would look like to have a socially distant award show complete with performances and A-list celebrity presenters, but it was actually quite memorable. Here are five unforgettable moments from the 2021 Grammy Awards.

Beyonce showed up
Everyone was pumped for the possibility that she might break the record of most Grammy wins by a female artist, and by any singer (male or female), which she did. She looked genuinely shocked at the news, which is insane, because it seems everyone else saw it coming, except her. But if we really think about it, we all should’ve been more excited that she even showed up. Beyonce hasn’t been to the Grammys since 2018, and many mainstream artists have shared their disdain for the Grammys by publicly denouncing them and boycotting them by not attending. Beyonce hasn’t openly shared such sentiments, but her absence the past two years has raised a few eyebrows. For whatever reason, she blessed us with her presence this year and we are definitely not complaining.

Silk Sonic Debut Performance
Let’s just say that the new group comprised of Bruno Mars and Anderson Paak. is appropriately named. Their sound is smooth like butter and so was their performance. Their single “Leave the Door Open” has peaked at #2 on the Billboard Hot 100 since its release and their album is highly anticipated. You can only imagine how many people were equally as excited for their Grammy performance when it was announced, myself included. Well, let me tell you–they DELIVERED. The performance was nothing less than immaculate. The choreography, the costumes, down to the light shimmer in the camera work. It was all so perfect. If this performance is in any way indicative of what we can look forward to with their album, we’re surely in for a treat.

Harry Styles’ Outfit
I have to be honest here. Harry Styles makes some really interesting fashion choices, and this year’s Grammys were no different. It kind of looks like he went into his closet blindfolded and picked out a bunch of random items. The weird thing is…it looks REALLY good. I have no idea why I’m so obsessed with this outfit, but I cannot get over it. It really grew on me. The more I look at it, the more I love it. At first glance, it’s like “What the hell is he wearing?” But the more you look at it, you kind of think. “That’s such a Harry outfit.”

Dua Lipa Coming to Life
If you know anything about pop culture, you know that Dua Lipa is constantly attacked for her lack of energy when performing. In November of 2019, she went viral for that exact reason. She came out in an interview to say that it really messed with her mental health and since then, I imagine she’s had a lot of reservations about performing. Well, you definitely couldn’t tell at the Grammys. She had something to prove and she did just that. She gave what needed to be given and served what needed to be served. She did a medley of Levitating and Don’t Start Now, and was joined by Dababy in the first half of her performance. We were blessed with an incredible outfit reveal halfway through and she topped it all off with a dance break at the end. You go, girl!

Lizzo’s Slip Up
I wouldn’t say that the Grammys are stuck-up or uptight or anything like that, but I think there is a certain level of class and etiquette associated with the award show. So, when the beautiful, talented, and HILARIOUS Lizzo slipped up while presenting, it definitely turned a few heads. She has received backlash in the past for her vulgarity, so I understand why she apologized immediately, but if we’re being honest…she didn’t need to. If anything, that made me love her more. She is unapologetically herself and (almost) never censors herself. Let’s get real here. It was funny, and given how dry the socially distant awards show was, we needed that to liven them up a little.