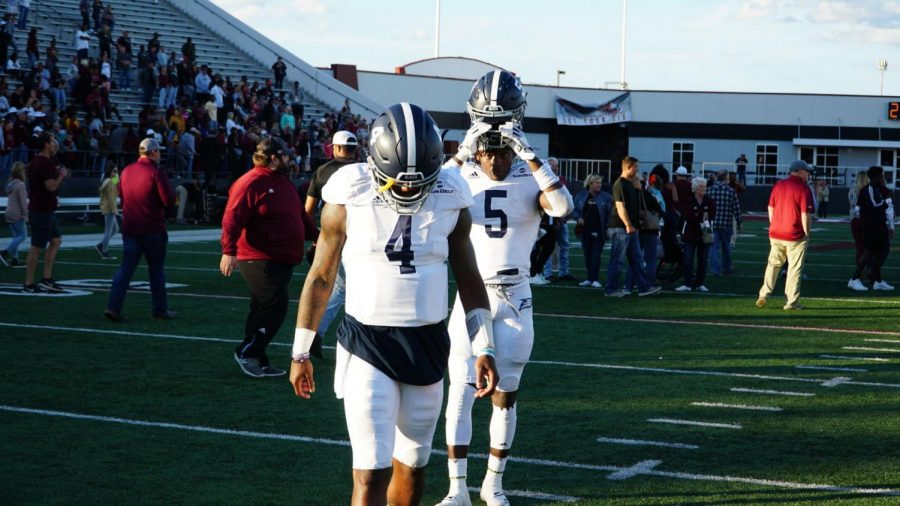 Redshirt-sophomore quarterback Shai Werts (4) walks off the field after the team's second loss of the season.

A week after knocking off No. 25  App State, the Eagles traveled West to face Louisiana-Monroe, where they would fall 25-44. Despite the loss coming at a bad time for GS, the squad still has hopes of hosting the first Sun Belt Championship in December.

Everything that could go wrong, did go wrong in the game

On the offensive side of the ball, the Eagles had no answers for ULM’s defense. Redshirt-sophomore quarterback Shai Werts, the team’s leading rusher, was only able to gain 10 yards on the Warhawks. GS failed to find the endzone with a rushing touchdown for the first time this season, and the only offensive touchdown came from a Werts 22-yard pass to junior receiver Mark Michaud.

Defensively, GS’ defense has been nothing but stellar up to this point of the season, but on Saturday, things were different. the pass defense gave up 337 yards during the entirety of the game, allowing the Warhawks to score multiple deep touchdowns.

Tyler Bass has been nothing but lights out for the Eagles kicking the ball through the first eight games, but the redshirt-junior kicker missed his first attempt of the season in the first quarter of the loss. In the fourth quarter, freshman wide receiver, NaJee Thompson, blocked a ULM punt, allowing redshirt-freshman linebacker Benz Josue to pick it up and run in for the touchdown, for one of the lone bright spots on Saturday’s game.

As previously alluded to, the kicker missed his first field goal of the season when the 26-yard attempt would hit the right-upright of the field goal post. Later in the game the Lou Groza Award finalist would miss another field goal, but still stands at 12-14 on the season, continuing to be one of the nation’s best kickers.

After punching in a 10-combined touchdowns in their last two games, the Eagles were held to just a single touchdown via a lone passing touchdown from Shai Werts. GS’ longest rush of the afternoon was just 15-yards, a number that is just above the high of nine yards the Eagles ran for against Clemson earlier in the season.

Werts has still not thrown an interception on the season, through the first nine games, while throwing for 626 yards and six touchdowns.

GS fell in what was their “Trap Game” for the season

On the Eagles’ schedule, ULM was put into the position where they would potentially be a trap game, and it came to fruition on Saturday afternoon. Sandwiched in between the frontrunners of the East division (App State and Troy) the Warhawks are amidst a disappointing season of sorts, but they proved dangerous against GS.

The ULM offense put up 44 points and crushed all hopes of the Eagles finding their way into the top-25 rankings for the season.

Eagles still control their own destiny

With the loss in the rearview, it is important to know that the season is not lost. East division leader Troy sits at 5-0 in conference, one in front of the Eagles, who are at 4-1. A win on Saturday over the Trojans would be nothing but huge for GS, because the Team would hold tiebreakers over the two threats of the division.

The final two games on the schedule are against the bottom-dwellers of the East in Georgia State and Coastal Carolina. Both games occur on the road for GS, but both teams have played rather poorly all season and should provide no challenge against the Eagles. If GS wins their final three games this season, the Sun Belt Conference Championship will be heading to Statesboro.