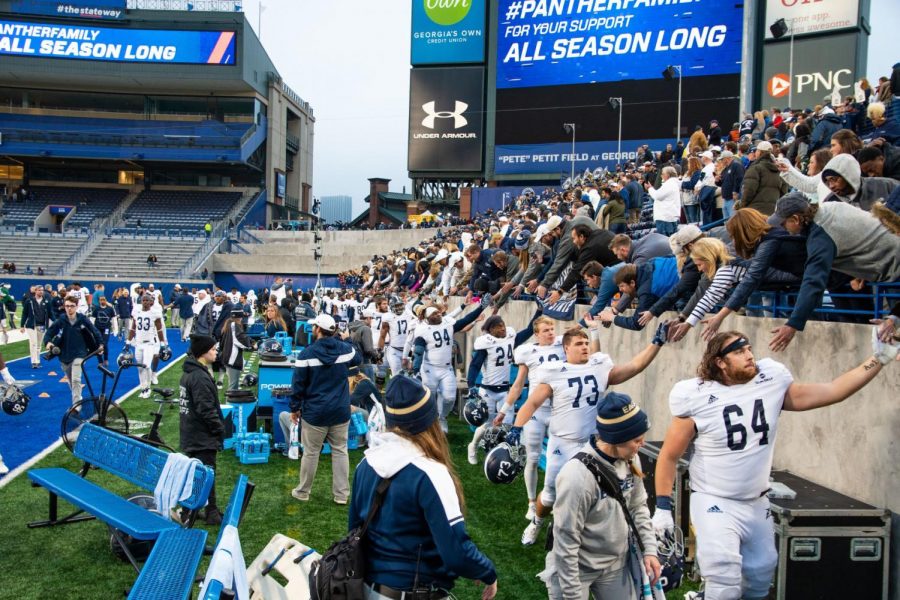 Georgia Southern players show their appreciation for the traveling fans after Saturday's win against Georgia State.

As the seconds trickled down in Georgia State Stadium, senior linebacker Tomarcio Reese headed towards the direction of the locker room, but made a turn. In that corner of the field laid the flags the cheerleaders used after scores. Reese and company picked up the banners and paraded them around the stadium that the Atlanta Braves once called home.

The seniors who three years ago capped a 9-4 season with Georgia Southern’s first bowl win in program history had just beaten their rivals for the first time since 2014 in an upending, near perfect, 35-14 victory.

Reese, one of the captains for the 2018 seasons, did his part on defense by leading the team with seven total tackles.

With Reese beginning to celebrate, the offense still had to kneel the ball one final time. On the field behind redshirt-sophomore quarterback Shai Werts was senior running back Wesley Fields, the other senior long captain.

Fields, a leader off the field with his emotion and passion for his team and community, was thrillingly calm following the win. His demeanor was professional as he rushed across to shake hands with the Panthers.

After the celebration and humility was over, Fields was able to step back and briefly think about the regular season that had just concluded.

“It means so much to this senior class,” Fields said. “Even when we were 2-10, 5-7 it means a lot for us to get back to that winning tradition that this place was built on.”

The Eagles returned to their winning ways with the way they got there—on the ground.

Led by Fields’ 151 yards, GS posted 276 rushing yards against GSU. They did it with the option, up the middle and even with Werts scrambling a few times.

With an offensive line that manhandled a young Panther defensive front, the Eagles had anything they wanted on the ground. And as good as the line was, Fields was quick to credit the rest of his teammates.

“The wideouts they don’t get too much credit because we’re a running school and they do such a good job of blocking the outside and being able to hold up the guys on the outside to let us get the big runs,” Fields said with a smile across his face.

The wide receivers and tight ends provided an edge on Saturday as they had all season, but to call them unsung heroes might be misleading.

GS had 52 plays on offense with 41 of them on the ground. Werts went 8 for 11 through the air, making the Panthers pay for not respecting the redshirt-sophomores arm.

“It’s the twelfth game, if they don’t respect (the throwing game) by now, then it is what it is,” Werts said. “Tonight showed what those guys can do. They did a great job of getting open and I just my job putting it where it needed to be.”

Halfway through the second quarter, Werts stood in the pocket and launched a 38 yard ball to redshirt-sophomore wide receiver Darion Anderson. Anderson took just two steps and was in the endzone for his third touchdown of the season.

Werts showed his ability later in the game, hitting redshirt-junior wide receiver Colby Ransom for a 58 yard touchdown in the third quarter to extend the Eagles’ lead to 28-0.

But as good as the defense played and as good a show Werts put on, the star of the show was Fields.

With just over eight minutes left in the game, Fields took the ball up the middle into an empty field. It seemed like Fields had the fifth score of the day, but a Panther had the angle on the senior.

Not wanting end his final game against GSU without a score, Fields cut back and walked into the endzone. The crowd erupted. All afternoon, the crowd that was mostly GS fans had been invested in the game, but with Fields scoring they knew how much it meant.

“When you’ve got them, just continue to put your foot on their throat,” Fields said. Just continue to keep driving and going at them. Don’t let up. I had that mentality and I had to get into the endzone. Just have to keep pounding and that offensive line did a heck of a job of just opening up the lanes.”

Saturday’s performance would’ve been a poetic swan song for the senior class, but there’s one more act to be seen, coming in the form of a bowl game.

GS will have to wait until Dec. 2 to find out who and where they’ll play their second bowl game in program history, so until then it’s back to business to keep improving.

As far as wishes of who they’re playing, Fields isn’t concerned with that.

“To be honest, I’m not even picky,” Fields said. “We were 2-10 last year so I don’t care where we go. I just want to go bowling with the team and be able to play one more time in this uniform.”