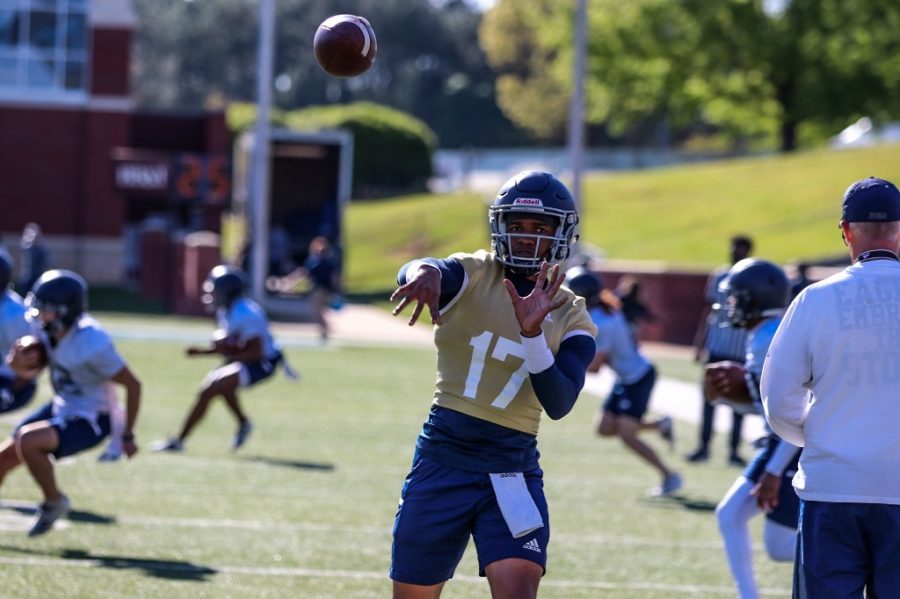 When Georgia Southern held their first scrimmage on Saturday, there was one notable absence: Georgia Tech transfer quarterback James Graham.

Graham, a former four-star recruit, started eight games for the Yellow Jackets and was a highly coveted transfer over the offseason.

While the specific reason for Graham’s absence is unknown to the public, head coach Chad Lunsford did comment on the situation after Saturday’s scrimmage.

“James is dealing with some personal issues and we’re helping him work through that,” said Lunsford. “You know, right now that’s just kind of up in the air.”

Lunsford assured that the team would do whatever they could to help Graham, but cautioned that there was no timetable for Graham’s return to the team.

So what does this mean for Georgia Southern as we near the end of Spring?

Connor Cilgeske, Sam Kenerson, Alex Bowen, Justin Tomlin, Will Lovett Jr. and Jaden Jenkins make up the remainder of the QB room for the Eagles.

Graham’s absence should virtually lock up the starting gig for redshirt junior Justin Tomlin, who backed up Shai Werts over the last two seasons.

In 16 games (including four starts) as an Eagle, Tomlin has accumulated 69 carries for 392 yards and three touchdowns. As a passer, Tomlin completed just over 45% of his passes with zero touchdowns and three interceptions.

Tomlin went 6 for 10 for 110 yards and two touchdowns, both to Jjay Mcafee. Since he was in a non-contact jersey, Tomlin’s ability as a rusher was limited on Saturday.

The absence of Graham paved the way for Cilgeske to take the majority of snaps at the helm of the second-team offense. The redshirt freshman hailing from Atlanta went 8 for 13 for 67 yards, capped off by a 22-yard touchdown pass to Darius Lewis. Cilgeske also rushed for 18 yards.

“Connor showed a lot of toughness today,” said Lunsford. “The thing that I’ve been impressed with him this spring is the whole quarterback mentality. He puts time into it. He puts extra into it.”

Sam Kenerson is the only other real factor in the Eagle quarterback battle. However, due to an injury that limited him earlier in Spring, there has not been much talk in regards to Kenerson.

Even if he does not claim a relevant role at quarterback for the Eagles, Kenerson’s world class speed should help him carve out some sort of role for the GS offense.

If Graham returns to the Eagles, he will surely have a large role in the GS offense. Whether as a starter or as the backup, Graham is simply too talented to keep him off the field.