After early struggles, GS has found their footing 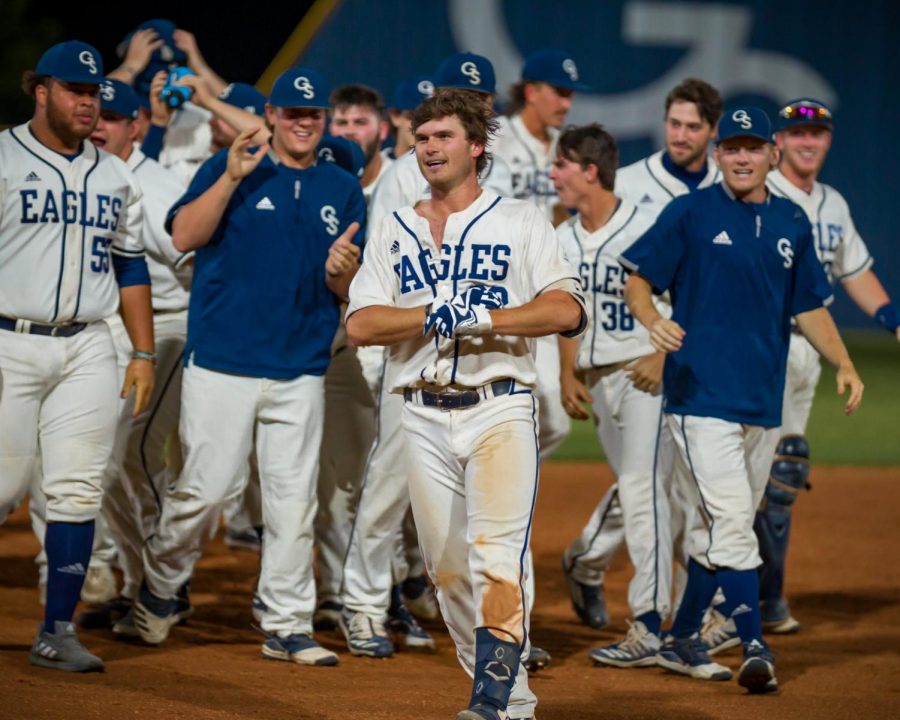 Austin Thompson (#22) celebrates a walk-off win against Mercer on April 14.

After coming into the 2020 season with sky-high expectations, the Georgia Southern baseball team had seemingly fallen short; however, after taking down the Georgia Bulldogs in Athens last Tuesday, things seemed to have turned around for the Eagles.

Through 32 games in 2021, the Eagles are currently 19-13 (7-5 SBC), which is good enough for second in the Sun Belt’s East division. After falling to .500 during a series against Georgia State, GS has won six straight games.

Offensively, fifth-year senior Mason McWhorter has been the star. McWhorter leads the Eagles in hits, home runs, walks and on-base percentage, while also ranking second on the team in RBIs.

Perhaps the most pleasant surprise for the Eagles has come from senior outfielder Christian Avant. A four-year starter, Avant has shown immense growth throughout the 2021 campaign and is on pace for career high numbers in virtually every statistical category.

Just like the offense, the Eagle pitching staff has been through its fair share of ups and downs throughout the 2021 season. Two names, however, have outshined the rest: Tyler Owens and Chase Dollander.

After starting the season as the Eagles’ top reliever, Owens worked his way up to a starting spot and his dominance has continued. In six starts and a total of 41 innings pitched, Owens has amassed a record of 4-0 and struck out 44 batters.

Dollander, a highly touted freshman, shocked many Eagle fans by claiming a starting spot from the very beginning of the season. In eight starts, Dollander has gone 4-1 and struck out a team-leading 52 batters.

In addition, senior Nick Jones has carved out a role as the Eagles’ top closer. In 17 appearances and a total of just 25 innings pitched, Jones has accumulated nine saves and struck out 46 batters.

While the Eagles still have a lot to prove this season, the apparent turnaround has the Eagles in a great position to finish the season.

The highlight of the remaining schedule is the team’s road trip to take on the Oklahoma Sooners in a three-game weekend series. The series against the Sooners will mark the end of the Eagles’ seven-game road trip.

The Eagles will complete the regular season on May 22 and the conference tournament will begin on May 25.