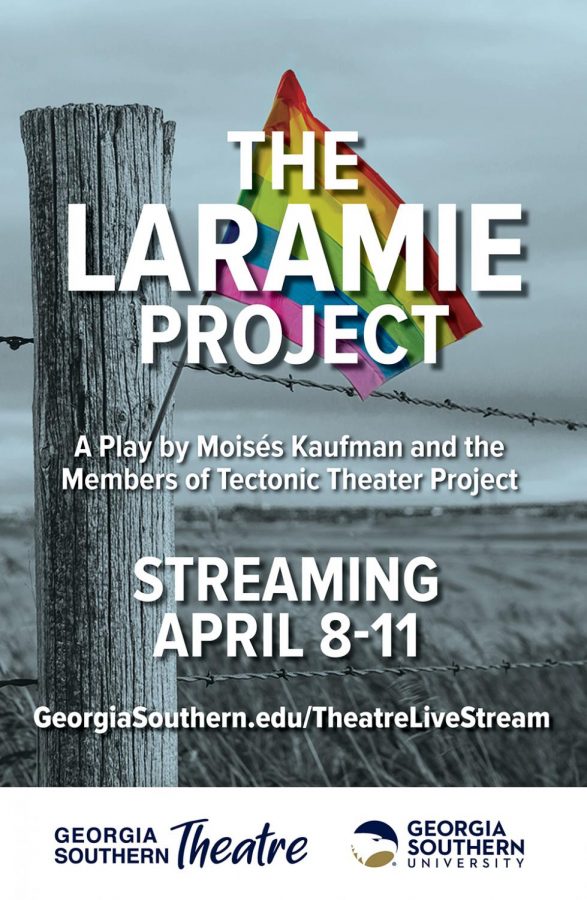 Georgia Southern hosted an online stream of the theater department’s production of “The Laramie Project” from April 8 through April 11. Students were able to freely enjoy the production at their leisure during the time period in which it was offered.

“The Laramie Project” was written by Moises Kaufman in 2000, and was a response to the tragic beating death of University of Wyoming student Matthew Shepard, who was assaulted because he was gay.

The play is primarily a performance of a variety of real interviews Kaufman conducted with residents of Laramie, Wyo. in the wake of Shepard’s death.

According to Georgia Southern’s website, “They conducted more than 200 interviews with the people of the town. Some people interviewed were directly connected to the case, while others were citizens of Laramie, and the breadth of the reactions to the crime is fascinating.”

The nature of the play demands creativity and versatility from the cast. There are an abundance of characters to be played, and many actors took on the challenge of playing several characters, all very different from each other.

The theater actors also faced the unique challenge of acting on-screen. Many actors argue that screen acting and stage acting are completely different processes, and demand different skills and techniques.

Logan Western, a freshman theater student, was a member of the cast and played a variety of roles, including the character of Aaron Kriefels, the student who discovered Matthew Shepard after he had been attacked.

Western mentioned that due to the cinematic nature of the production, he had to take a different approach than normal.

“I had to keep it more dialed back,” said Western, “I wanted to move around much more but that wouldn’t really fit with being on camera.”

Western did mention that it was, in the end, worth it. “I loved the process. A lot less stress, to be honest.”

The theater departments at Armstrong and Statesboro have both remained relatively active in 2021. Statesboro’s theater department streamed a performance of Shakespeare’s “Much Ado About Nothing” in March, giving both campuses a full-length Spring production.

Armstrong’s theater department has also continued to support The Last Laugh Improv Troupe, which has had multiple workshops and performances since the year began. Many aspects of the performing arts have changed since the pandemic struck in 2020, but these changes may not stick around for much longer. If they do not, actors may come out of the pandemic armed with more skills than they had previously.

The long term future of campus theater is cautiously optimistic, similar to many aspects of campus life. There is no definitive answer on when actors and audiences can return to theaters, but the Armstrong theater department found an effective way to remove the masks from the actors while still maintaining safe social distancing.