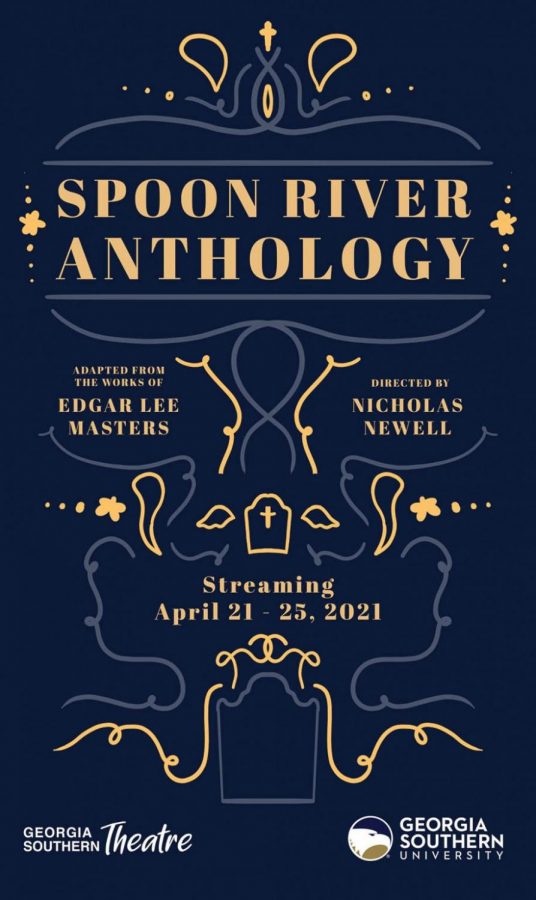 The final play of the 2020-21 school year, Spoon River Anthology, will be streaming this week from Wednesday April 21 until Sunday April 25.

We discussed with Newell some of the challenges that have come about when switching to a live stream theater format, “We also have a limit in what things we can actually put into streaming because some of the companies that hold the rights will not allow it. Or if they do, they have really strict rules about it.”

This impacts the process from the very beginning as he explained, “So doing something that is either in the public domain, like ‘Much Ado’ and ‘Spoon River’, is one way around that, or getting permission from the playwright, or writing your own. So we were trying all different methods and it’s been a very interesting experience that I think we’ll all look back on probably fondly even though it’s been rather frantic.”

When asked if the live stream format was one that the theater department would utilize even after the lifting of the guidelines, the answer was a sound no, as Newell explained that, “Number one, that’s just not how theater is supposed to work. What makes theater different than film is the audience and performer interactions, their relationships. And legally it’s not set up to continue that way, that’s not the way that theater works. ”

This was a sentiment which was shared by cast members Camille Cornish, Armistead Thackston, and Kabera Higgs when it came to performing their performances and over all theater experience this year.

Newell discussed that part of the choice to bring Spoon River to Georgia Southern’s live stream theater was the anthology nature of it. The separate monologues allow for an easier time when it comes to working with the COVID guideline obstacles while still allowing the stories to be told without any plot issues.

The live stream performance of Spoon River Anthology will present 26 of the more than 200 that are contained in the original “Spoon River Anthology”, by Edgar Lee Master’s 1915 original work. These are monologues from the afterlife of the citizens of a small town called Spoon River, Illinois where the residents are dying to turn upside down the perspective of how they lived their lives in their heartland town.

Due to the interconnected nature of the small town as well as the rich inner lives of citizens Newell carefully selected 26 of the most interesting and interconnected characters, monologues and stories to present to the audience.

Of the cast of 26, with 25 undergraduate and 1 graduate student, we were able to speak to three cast members about the creative process and their characters that we can look forward to getting to know.

Some of the characters who will be making an appearance include Dora Williams, who’d been a far flung traveler in her life with the possible hints of having met a tragic end. She will be portrayed by Camille Cornish who’s also been in “Much Ado about Nothing” and “Every 28 Hours” throughout the last two semesters.

“Riders to the Sea” director, Armistead Thackston, will be making an appearance as Willie Metcalf who Thackston described as someone who was deeply understanding of nature and the beauty of life.

Mrs. Williams, the town milliner who is determined to set the record straight about the rumours that haunted her in life, is being played by Kabera Higgs. Higgs also discussed how in Every 28 hours there was more use of Zoom and green screens instead of the focus on the costumes that we’ll be seeing in this upcoming performance.