A corner of Southern: Director Michal Whitaker brings “The Amen Corner” back to Georgia Southern’s theatre 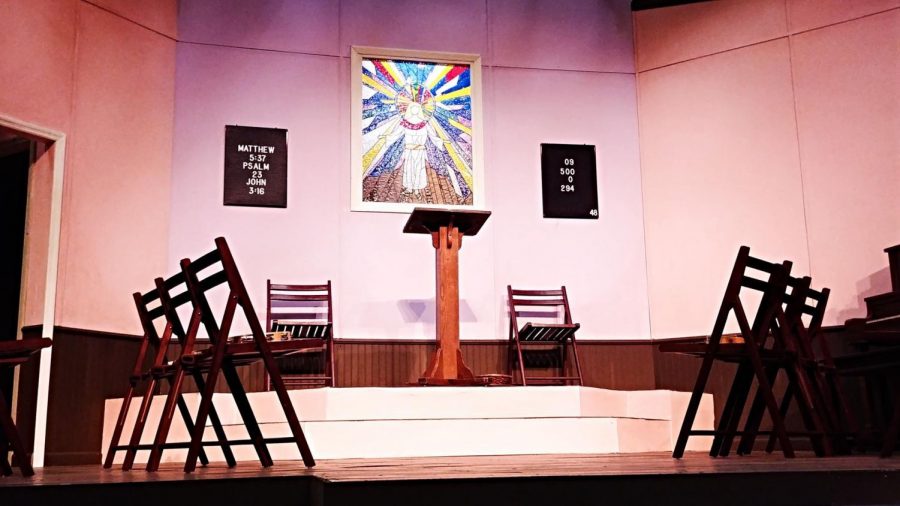 The church set of "The Amen Corner," where the theme of hypocrisy in the Christian faith will be the focus of the story.

A pious church elder. A fretful mother with a damaged heart. An absentee father with blood on his lips and lost love in his soul.

These characters are only a few that make up the intense cast of playwright James Baldwin’s “The Amen Corner,” a three-act play that has a special place in Georgia Southern University’s heart and history.

“The Amen Corner” follows the story of Margaret Alexander, a single mother and pastor who must re-evaluate the role of religion and family as her son stands on the brink of manhood and begins to choose his own path.

Such themes as hypocrisy in the Christian religion and generational disagreements will be explored throughout the story. Through these themes, the play demonstrates how such issues are still as prominent today as they were when the play was written in the 1950s.

Theatre director and former professor Michal Whitaker returned to direct the play despite being retired from the theatre profession.

Whitaker was hired by GS in 1981 as the theatre program’s first African-American instructor. His first production was a light musical piece.

“It was understood when I was hired that I would do a black theatre piece,” Whitaker said. “I and the faculty decided that I didn’t want my first play to be black. I didn’t want to get pigeon-holed.”

Whitaker went on to direct “The Amen Corner” in 1982 as the campus’s first all-black cast production and the play served as a major step in the school’s integration process, Whitaker said.

Whitaker has directed several productions of “The Amen Corner” around the country, two of which Baldwin himself saw.

“[Baldwin] went to my show in New York and in Chicago,” Whitaker said. “I was very blessed.”

The play’s themes of church and belonging mirror Baldwin’s life and experiences with church.

“James Baldwin was a child preacher, a prodigy,” Whitaker said. “Then he left church totally and became a writer.”

According to Baldwin’s essay “Letter from a Region in My Mind,” he left the ministry due to his growing passion for writing and dissatisfaction with the ministry, which he began to view as hypocritical and racist.

Whitaker said one aspect that he loved of Baldwin’s work was his ability to love himself and mankind despite its flaws.

“[Baldwin] loved being black, he’s absolutely in love with it,” Whitaker said. “He gets angry about it because there’s so many disappointments in [his] brotherhood. At the same time, it has this wonderful sense of ‘africanical’ love. It’s this love of your own people despite their faults.”- Odessa, “The Amen Corner.”

From the pages to the stage

Peyton Rowe, senior political science major, will play the character of Sister Moore, one of the pious elders of the church who acts as a major antagonist.

Rowe describes Sister Moore as someone who is proud to never have been married or given in to the advances of a man.

“She has saved herself for God,” Rowe said. “She becomes jealous of [Margaret] because she is a woman who has had kids, married and separated, but she gets to be the preacher in the lead of this church.”

A major aspect of Rowe’s character is her generational differences with the starring character, Margaret Alexander.

Margaret will be played by Deja Holmes, senior theatre major, who had to develop a maternal mindset for her role.

“There were a lot of rehearsals, a lot of work with Mical,” Holmes said. “There were ensemble building to build those relationships. I have a son [in the play] so I had to work on that a lot to make the relationship seem realistic.”

Whitaker said that a quote by the character Odessa could sum up the meaning of the play, as well as Baldwin’s own views of religion and humanity.

“Maybe I don’t love the lord like you, but I know something else. I know how men and women can come together and make each other happy, and make each other sad. If you only knew a little bit about what people go through in the low, black place they find their feet, you would have a meeting here tonight.”

“The Amen Corner” will run at the Black Box Theatre in the Center for Art and Theatre from Nov. 7 to Nov 14. All weekday shows will begin at 7:30 p.m. with Sunday’s show beginning at 2 p.m. There will be no Monday show.

Tickets are $12 for general admission, $6 for students, faculty and staff.