Three storylines to watch at the Georgia Southern Blue-White Game 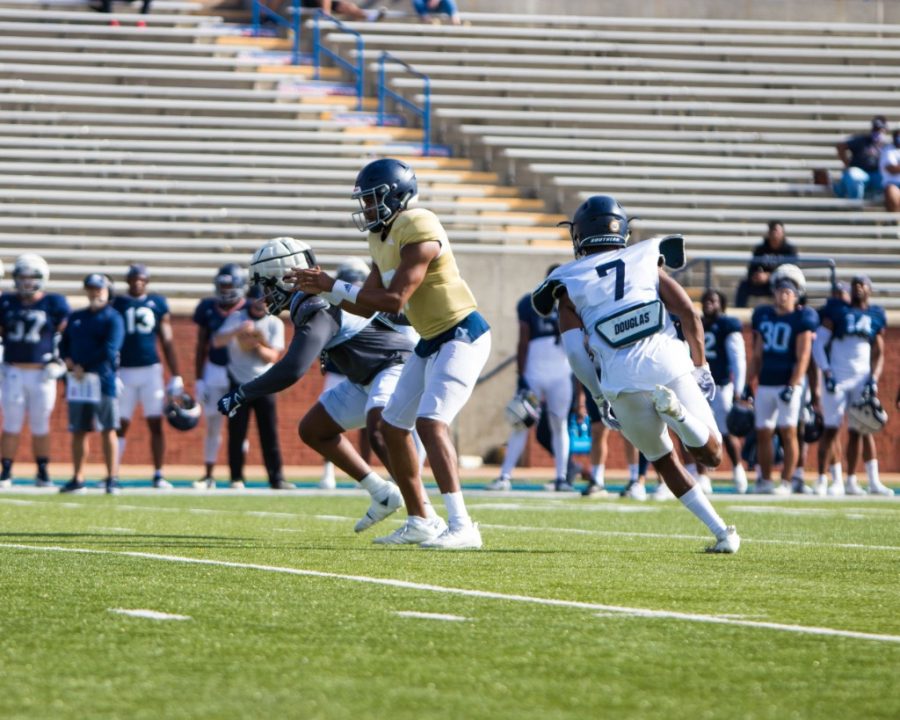 On Friday night, the Georgia Southern football team will take the field for the annual Blue-White spring game. The game will be the first time that many GS fans have seen the Eagles on the field since last December.

Following the departure of many key pieces on both sides of the ball and multiple changes on the coaching staff there will be a handful of noteworthy storylines to follow on Saturday. Here are three of the most intriguing storylines:

Who will be the Eagles starting quarterback in 2021?

For four consecutive seasons, GS fans have watched quarterback Shai Werts lead the Eagles onto the field, but this offseason Werts transferred to Louisville , which leaves GS with a huge question mark at the quarterback position.

The four names to know at the quarterback position this season are James Graham, Justin Tomlin, Sam Kenerson and Connor Cigelske.

Graham, a transfer from Georgia Tech, could be the most talented of the group, but he has not been with the team over the past few weeks. While the reason for his absence is unknown, head coach Chad Lunsford assured fans that the team was doing everything in their power to help Graham.

With Graham’s status unknown, Justin Tomlin becomes heavily favored to win the starting role. After backing up Werts for three seasons and starting four games, Tomlin has the most experience of all the current Eagle quarterbacks.

“If we played today, JT (Tomlin) is the guy,” said Lunsford, “But I think we have to really get the quarterbacks solidified.”

The two wild cards in the quarterback race are redshirt freshmen Kenerson and Cigelske.

Kenerson is probably the fastest player on the Eagles’ roster, but has been hampered by injuries. This led to Kenerson only seeing action on two offensive snaps during the 2020 season.

Cigelske has never seen game action and only made the dress roster for one game last season. During the spring, however, Cigelske has made huge strides and impressed the coaching staff.

“The thing that I’ve been impressed with him this spring is the whole quarterback mentality,” said Lunsford about Cigelske. “He puts time into it. He puts extra into it. He comes to practice very prepared, and he’s very efficient.”

Who will replace the playmakers on defense?

While the offense struggled during the 2020 season, the Eagle defense cemented themselves as one of the top units in the country. Scot Sloan’s unit ranked No. 14 in total defense, allowing just over 325 yards per game.

Linebacker Rashad Byrd and defensive end Raymond Johnson III were among the stars of the 2020 defense, but after such a successful season, both guys opted to enter their names in the 2021 NFL Draft, which left the Eagles with a hole on the defensive side of the ball.

One guy who has stepped up throughout spring practice is sixth year linebacker Todd Bradley-Glenn. Throughout his time in Statesboro, Bradley-Glenn has started nine games, but has never cemented himself as a full-time starter.

“A guy that really jumps out to me is Todd Bradley-Glenn,” said Lunsford. “He has really taken charge with losing Rashad Byrd from last year. Bradley has really stepped up and is really controlling our defense.”

Another linebacker to keep an eye on is Oregon transfer Andrew Johnson Jr. Despite never starting a game for the Ducks, Johnson was a three-star recruit coming out of high school and is still a very talented player.

In terms of replacing (Raymond) Johnson, the answer should be a simple one. Redshirt senior Justin Ellis seems to be the favorite to become a starter on the defensive line. After transferring to GS from Syracuse, Ellis started five games in 2020 and has a good reputation among the coaching staff.

How will the offense look under Doug Ruse?

For the majority of the 2020 season, the Eagles offense was under the authority of Bob DeBesse. But after putting up disappointing offensive numbers, DeBesse was canned in favor of Doug Ruse.

Ruse was the offensive coordinator at GS during the 2014 and 2015 seasons, when the Eagles led the country in rushing yards per game. In addition, the Eagle offense averaged 37.7 points per game under Ruse

While the offense under Ruse will not undergo a massive change, the philosophy behind the offense should see some changes.

Under DeBesse, the Eagles seemed determined to run the football, even when it seemed like an obvious passing down. But once Ruse took over as the interim offensive coordinator, a switch seemingly flipped for the Eagle offense.

Ruse will coach the White Team on Saturday, which should give Eagle fans a glimpse into what to expect this season.

The annual Blue-White game is set to kick off at 7:30 p.m. on Friday and it will be televised on ESPN+ for the first time in program history.