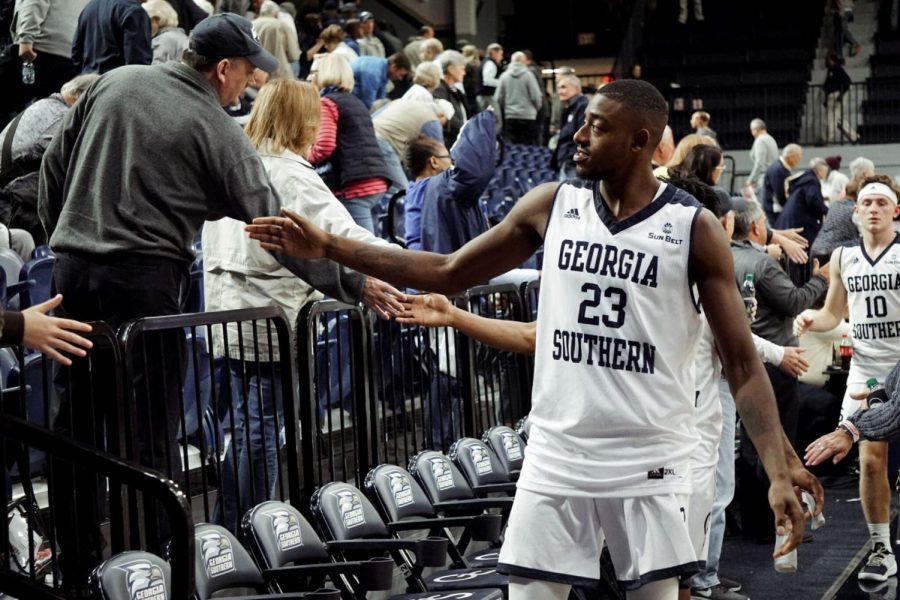 Georgia Southern suffered its first loss of the 2018-19 campaign in a 69-64 performance against ETSU at home Tuesday night. In their first game since hoisting the Islands of the Bahamas trophy last Sunday, the Eagles lost their first regular season non conference home game since Dec. 4, 2016 against Florida Gulf Coast.

Here are three takeaways from the loss:

Montae Glenn bullied on the boards

Glenn was one of the top rebounders in the Sun Belt last season and the Buccaneers were well aware. At halftime, the 6 foot 8 senior had just one rebound and no points.

Obvious frustration was expressed from Glenn.

The second half was better for Glenn, coming down with five boards and four points, but it was too late. ETSU outrebounded GS 46-34, just the second time this season the Eagles have been outrebounded.

ETSU was able to double team and box out Glenn all night forcing the rest of the Eagles to crash down and attempt to come down with the ball. Redshirt-sophomore Quan Jackson also was able to pick up six rebounds in the losing effort.

“Montae is a big key to this team when it comes to rebounds and stuff like that,” senior Tookie Brown said. “They were boxing him out because they knew Montae likes to crash the boards to get offensive putbacks. It was a struggle for him tonight.”

The emergence of Elijah McCadden and Simeon Carter

There are six freshmen on the 2018-19 GS roster, but McCadden has risen above the rest. The freshman from North Carolina played significant minutes in Nassau and earned a starting role over Isaiah Crawley Tuesday night.

As a starter, McCadden had 10 points, three rebounds and an assist in 23 minutes. His size was able to slow down ETSU’s quick transition for much of the night and his confidence was there.

“You can see him learning. He’s actually one of our smartest guys on the team,” Head coach Mark Byington said. “He plays multiple positions, one of our best defensive guys and he’s going to keep getting better and better.”

McCadden provided even more size that had been missing from the GS lineup since Byington started with the Eagles.

Another addition to size and talent was Simeon Carter. The highly anticipated debut of the Iowa State transfer did not disappoint.

When Carter took the court, the crowd gave a booming roar in excitement. The redshirt-junior had four points and one rebound in 11 minutes. His time was shortened due to his three personal fouls.

“Simeon Carter came in tonight and gave us some really good minutes,” Byington said. He hadn’t played a college basketball game in two years. It was good for him to give us some positive minutes.”

The Eagles all season have been able to push the pace and create added possession. That wasn’t the case Tuesday with the Buccaneers hitting shots and getting back on defense to prevent any wide open dunks or easy layups.

GS had just 15 fast break points, a season low. And in the waning minutes, ETSU’s ability to keep GS from scoring in the open court was the difference.

“They slowed us down, but I think at sometimes we slowed ourselves down,” Byington said. “We sometimes overdrove a game that we should’ve made a pass. We’re going to keep pushing the ball because it’s something we’re good at.”