Only one touchdown scored in annual spring game 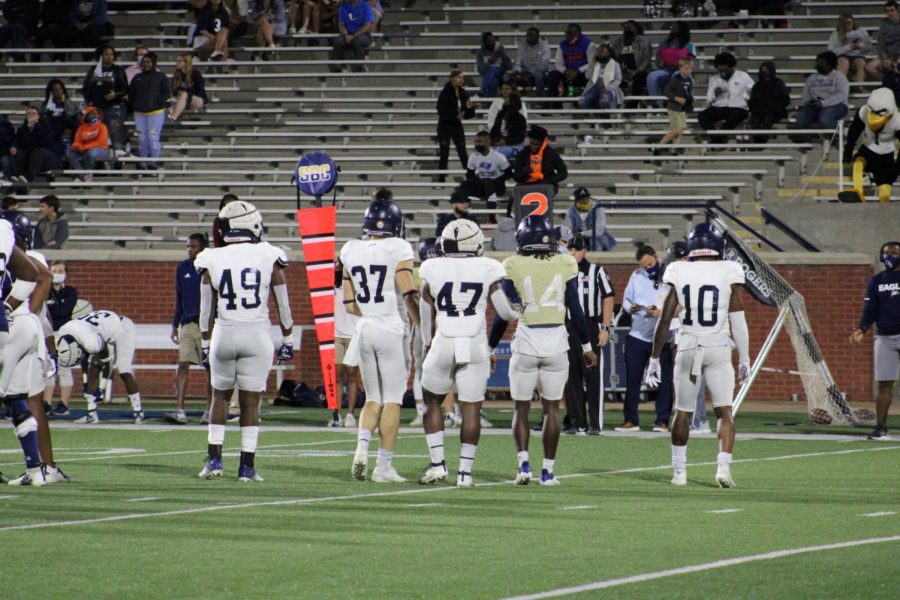 Amidst the global COVID-19 pandemic, the Georgia Southern football team was one of many schools who were robbed of a spring season in 2020.

However, just one year after the global death count due to the COVID-19 virus eclipsed 40,000, the Eagles successfully completed their spring season after the annual Blue-White game.

“We were really able to work on the small details and things that we had to rush last year,” said head coach Chad Lunsford. “It was very valuable that we were able to get them all (practices) and I think that will show this coming year.”

A wrinkle in the rules required every player on both teams to play at least one snap, which caused both offenses to struggle to find their rhythm.

The first quarter was rather uneventful, with the only score coming from a 23-yard field off the leg of Alex Raynor.

In the second quarter, Justin Tomlin found slot receiver Darius Lewis for 19 yards and the lone touchdown of the game. After not scoring a touchdown during his 2019 campaign, Lewis was ecstatic about finding the end zone on Friday night.

“Honestly that’s my first touchdown,” remarked Lewis, a redshirt sophomore. “It definitely felt good. I like that, so I want to score a lot more.”

After the game, Tomlin echoed the sentiments of his coach about the importance of having a full spring season.

“I felt like it was needed that I get a lot of reps under my belt,” said Tomlin. “Learning the new offense too, so I felt like that was good for me.”

The dominant defensive performance only provided more confidence to a defensive group that returns a vast majority of their production from last season.

“I feel like the sky’s the limit,” stated Allen. “But we have to go back to work, go back to ground zero, watch film and do a little extra. We’re not the same team as last year, so we just have to put a little more in.”