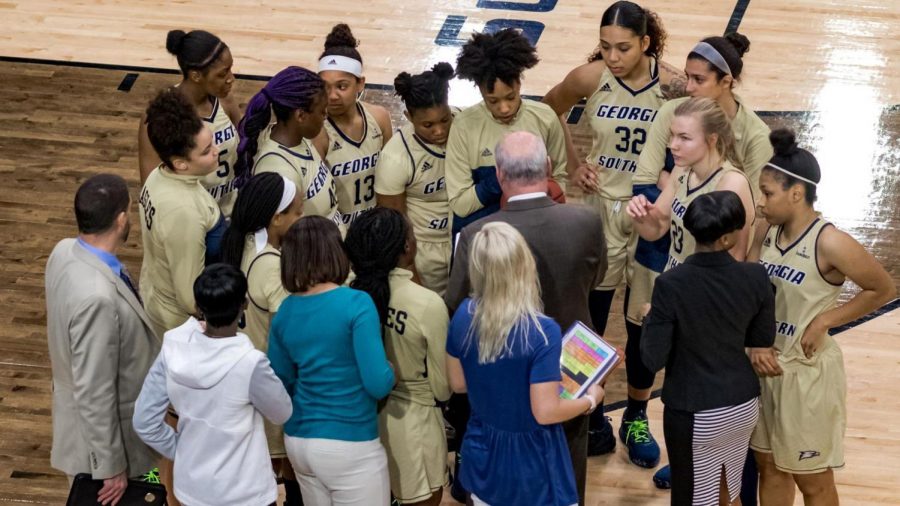 After a hard working offseason and an influx of fresh faces, Georgia Southern women’s basketball returns looking to put last year’s 5-25 season behind them.

Ending last season in a heartbreaking, triple overtime 88-81 loss against Louisiana in the first round of the Sun Belt Championships, the Eagles are looking to start things off right. They were projected to finish tenth in the Sun Belt by the 2018-19 Preseason Poll, where the results were selected by the league’s coaches.

With half of the roster being freshmen, the team is relatively young. There are only two returning starters from last season, Alexis Brown and Nakol Franks, but seven returners overall.

With the No. 38 nationally ranked women’s high school basketball player in the country, Jordan Strange, a player from the international New Zealand U17 team in Tsubasa Nisbet, a high school conference champion in Lola Lovitt, and with multiple all state/all region honorees, this freshman class has high expectations for their collegiate careers.

The team will look to upperclassmen offensive leaders Alexis Brown and Nakol Franks for guidance. Brown led the team with 9.0 PPG and Franks led the team in overall points with 267 last season.

These players have a tough schedule ahead of them. The Eagles will not play a conference opponent until January 3 where they will face a strong Texas State. Hopefully, this small gap in the beginning of the season will allow the players to find a rhythm before crucial conference play. Besides battling solid Sun Belt teams, GS will have some big non-conference games including Virginia Tech, University of Georgia, Mercer University, and Kennesaw State University.

Little Rock, arguably the Eagles’ toughest opponent this season, will play at home with majority of the same players from last season; with three out of five starters returning. In a very close and nail biting game, they defeated Texas State to take home their fourth Sun Belt Championship title, 54-53, last spring. This was their second title in the past four years. They outscored GS 64-34 and 92-52 in both meetings. They are projected to finish first by the Sun Belt Preseason Poll, rallying 8/12 first place votes.

Texas State, who finished 23-10 last season will travel to Hanner Fieldhouse on January 3 to play GS for the first time this season behind Toshua Leavitt. She averaged 17.8 PPG and lifted the Bobcats to victory for both games against GS last season, 81-56 and 60-51.

Appalachian State, GS’ rival, is looking to oust the Eagles once again after a 87-56 victory at home last season. They will depend on breakout junior Bayley Plummer, who led the Sun Belt in rebounds, and welcome back Madi Story from a season ending lower leg injury.

Ready to bounce back and make Eagle Nation proud this season, the Georgia Southern Women’s Basketball team will take have its season opener against Wofford University on Tuesday at 6:30 p.m. in Hanner Fieldhouse.