The George-Anne Media Group • May 2, 2021 • https://thegeorgeanne.com/30483/sports/lady-eagles-capture-first-sweep-of-the-season/ 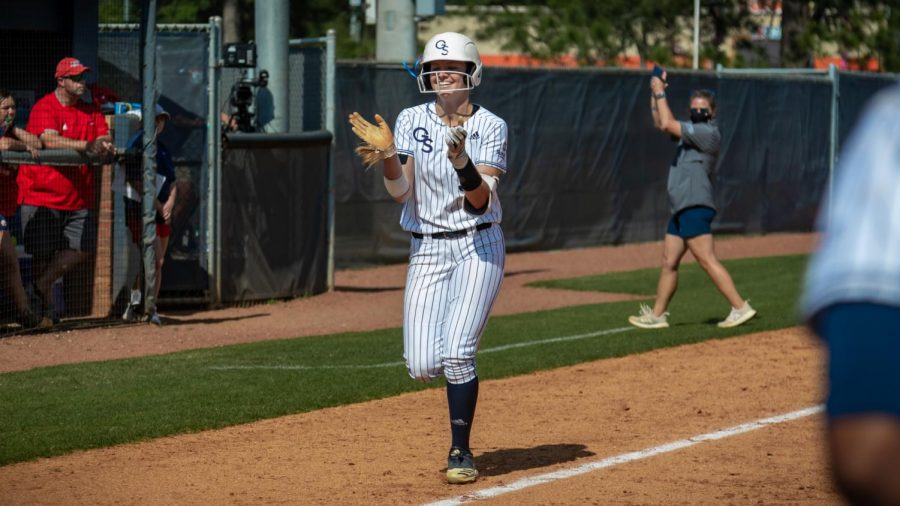 Amidst a disappointing season, the Georgia Southern softball team has had few bright spots. One of those bright spots came over the weekend as the Lady Eagles swept the South Alabama Jaguars.

The series began on Friday as GS took down the Jaguars, 9-1. The nine run performance was tied for their third highest run total of the season.

Sophomore Bailee Wilson led the way for GS, going a perfect 3-3 with a home run and three RBIs. In addition, Mekhia Freeman and Allyssah Mullis both recorded multiple hits.

Aaliyah Garcia pitched a complete five innings for the Lady Eagles and struck out five batters on the way to her fifth win of the season.

After Friday’s game lasted just five innings due to the score differential, Saturday’s game was the polar opposite. The Lady Eagles took down USA 3-2 in an eight inning affair.

With the game tied in the seventh inning, freshman Aniston Johnson launched her fourth home run of the year to send the game to extra innings. In the eighth inning, a Wilson walk-off single clinched the series for the Lady Eagles.

Rylee Waldrep pitched four innings and struck out six batters, but senior Harlee Rewis was credited with the win. Rewis is now 2-2 on the season.

GS took down the Jaguars 2-0 on Sunday, which marked just the third time the Lady Eagles pitched a shutout this season.

A Wilson single forced a sloppy USA error and brought in Ashlynn Gunter to break the ice. The only other run of the game came in the sixth inning when Mullis hit her first home run of the season.

Garcia struck out five batters and pitched her second complete game of the series, pushing her record to 6-6 this season.

GS now sits at 14-25 (6-14 SBC) on the season, which is good enough for eighth in the Sun Belt. The Lady Eagles’ three-game win streak is tied for the longest active streak in the conference.

The Lady Eagles will be back in action this weekend as they close out the season with a three-game series in Atlanta against Georgia State. First pitch is set for 5 p.m. on Thursday, 1 p.m. on Friday and 3:30 p.m. on Saturday.