The George-Anne Media Group • May 7, 2021 • https://thegeorgeanne.com/30501/sports/georgia-southern-women-set-for-historic-ncaa-tournament-match/

Eagles will take on No. 11 Georgia Tech 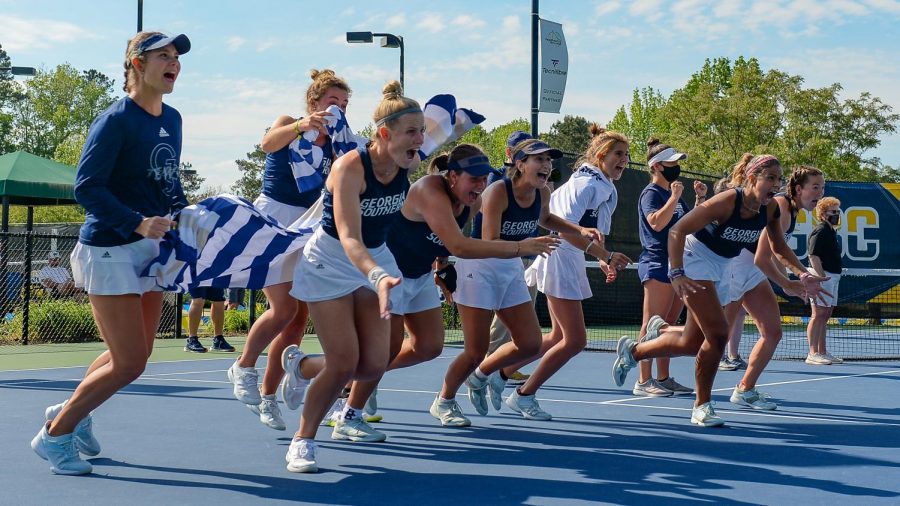 On Saturday, GS will make history once again as they play in the program’s first ever NCAA Tournament match against the Georgia Tech Yellow Jackets.

“I had a feeling back in August that we could be really good, depending on how some of our freshmen stepped up,” said head coach Sean McCaffrey. “I could tell the girls were motivated.”

Two months into the season, the Eagles record sat at just 8-8. But after a midseason halt due to COVID-19 cases within the program, the GS women have won their last 11 matches.

GS will face their biggest challenge of the season on Saturday, as they are set to face Georgia Tech, the No. 11 team in the country.

The Lady Eagles have taken on two ranked teams already this season in No. 3 Georgia and No. 9 UCF. Both matches resulted in a GS loss, but should give the Eagles an idea of what to expect on Saturday.

“They’re a very, very strong team. They’re really well coached. They have a number of players who are blue-chip level players,” remarked McCaffrey. “I think we have some good game plans, we have some ideas on ways that we can compete.”

Saturday’s match is set to begin at 2 p.m. and will be available to stream on the Georgia Tech Athletics website.