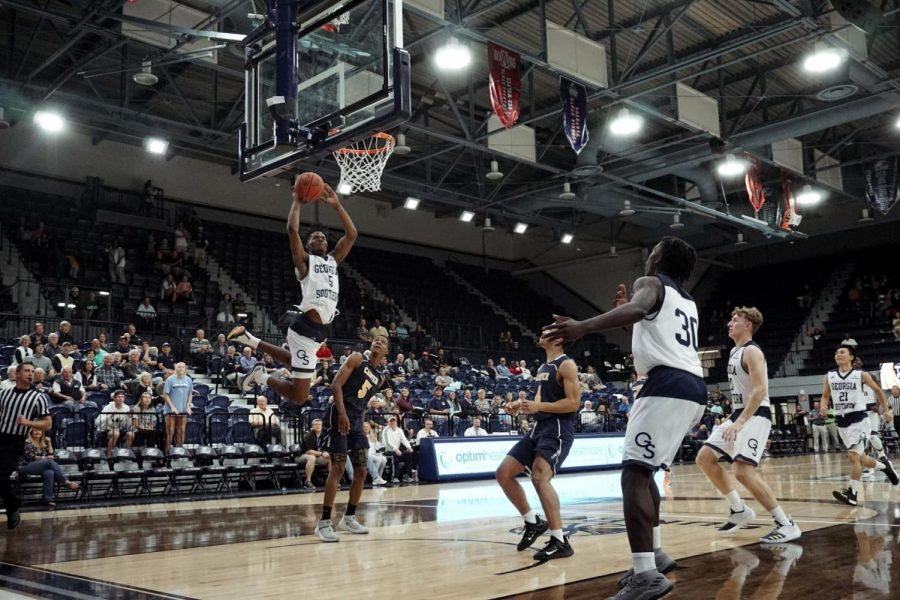 The Eagles currently sit on a four game win streak and a 10-5 conference record while being tied for second in the Sun Belt with rival Georgia State.

The Islands of the Bahamas Showcase plays host to eight teams, all of which are visiting from across the United States. These early season tournaments and showcases have become the norm in college basketball and GS has had success in them.

Last season, the Eagles made it to the championship game in the Gulf Coast Showcase where they fell by three to Towson.

But rather than focusing on the possibility of another trophy, head coach Mark Byington is looking forward to using the showcase as a chance to get better.

“What I like about the tournament is that it gives your guys the feeling of what it’s like to play games three straight days,” Byington said. “It kind of gives you an idea of what we have to do in March.”

After this weekend, GS won’t have the stress of playing three games in as many days until the Sun Belt tournament, but Byington is confident the tournament will test and improve his team’s endurance.

But while they’re focused on the long term effects and getting better as a team, the Eagles still want a trophy. That starts Friday against 2-0 Florida Atlantic.

Central Florida was the preseason favorite to win the American Athletic Conference, so the Owls’ 80-79 win over the Knights Sunday was certainly an upset.

Like GS, FAU is also coming off of a win where they were down by 20 at halftime. A second half surge was led by Anthony Adger’s 19 points and Xavian Stapleton’s double-double.

A win for FAU would give them their first 3-0 start in program history, but a win for GS would put them in a prime position to win their first in-season tournament since 2003.

Redshirt-sophomore Quan Jackson comes into the game looking to continue his fun and winning ways. Jackson is averaging 23 points per game through two games, just ahead of senior Tookie Brown’s 18 PPG.

“I say just enjoy it, but when we land down it’s a business trip,” Jackson said. “We’re gonna have fun too, but we have to take care of business first.”

Offense from GS hasn’t been hard to find, but after allowing 54 first-half points against George Mason the defense will be under the magnifying glass. The Eagles have forced 51 turnovers, 31 steals and 13 blocks through two games.

GS will need to play more like the second half of the GM game if they look to have a shot at their first victory against a Conference-USA team since 2016.

The continuation of fun is also expected to be on display in the Bahamas, but the beach is out of question for Byington’s team.

“I have a lot of guys that won’t take their shoes off on the beach,” Byington said. “I don’t think any of my Florida guys can swim.”

Their first game of the showcase against FAU is set to tip off at 5 p.m. Friday and they’ll face either Towson or Pepperdine Saturday. All games can be streamed on-demand here.

“We’ll have some fun,” Byington said. “Hopefully we come back having played some really good basketball because it’s going to be a challenge.”