The George-Anne Media Group • May 11, 2021 • https://thegeorgeanne.com/30570/sports/lady-eagles-catch-fire-to-conclude-the-regular-season/

GS takes down Georgia State in a sweep 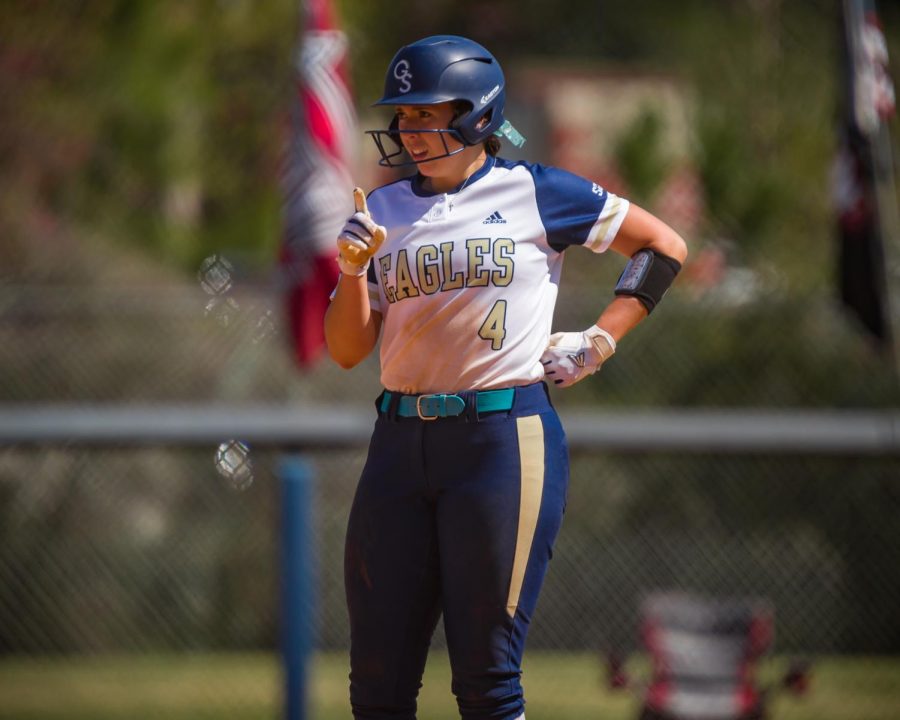 GS closed the season with a sweep of Georgia State, who they will take on to open conference tournament play on Tuesday.

The series began with a nail-biter on Thursday night as the Lady Eagles escaped with a 5-4 victory. GS trailed by one run entering the final inning, but a three-run Bailee Wilson home run was enough for the Eagles to walk away with a win.

Aaliyah Garcia pitched five solid innings, but sophomore Kyleigh Richardson pithed the final two innings and was credited with the win on the mound.

Friday’s game was another hard fought victory that saw the Lady Eagles escape with a series-clinching victory, this time by a score of 11-7.

The Panthers jumped out to a three-run lead in the third inning, but GS fought back to tie the game after seven innings. In the eighth inning, the Lady Eagles found four runs to emerge victorious.

Wilson, who recorded four total RBIs, hit her second three-run home run of the series in the eighth inning, but Ashlynn Gunter accumulated three RBIs of her own. In addition, Mekhia Freeman logged two more RBIs.

Despite pitching just over one inning, Harlee Rewis was credited with the win. Anna Feil and Waldred both pitched over three innings during an impressive showing.

Unlike the first two games of the series, the Lady Eagles won in dominant fashion on Saturday. A two-run Faith Shirley home run propelled GS to a 9-4 victory to complete the sweep.

Aniston Johnson, Jess Mazur and Freeman all accumulated two RBIs of their own as the Eagle offense put together an impressive performance.

After recording six straight victories, GS concluded the 2021 regular season with a record of 17-25 (9-14 SBC). The Lady Eagles enter the conference tournament as the No. 7 seed.

As the seven-seed, GS will take on No. 10 seed Georgia State for the fourth consecutive game. Tuesday’s game will take place at Troy University, who will host the tournament. First pitch is set for 2 p.m. and the game will be televised on ESPN+.