The George-Anne Media Group • May 16, 2021 • https://thegeorgeanne.com/30584/sports/mens-golf-set-for-another-ncaa-tournament-run/

GS returns to tournament after 2019 appearance 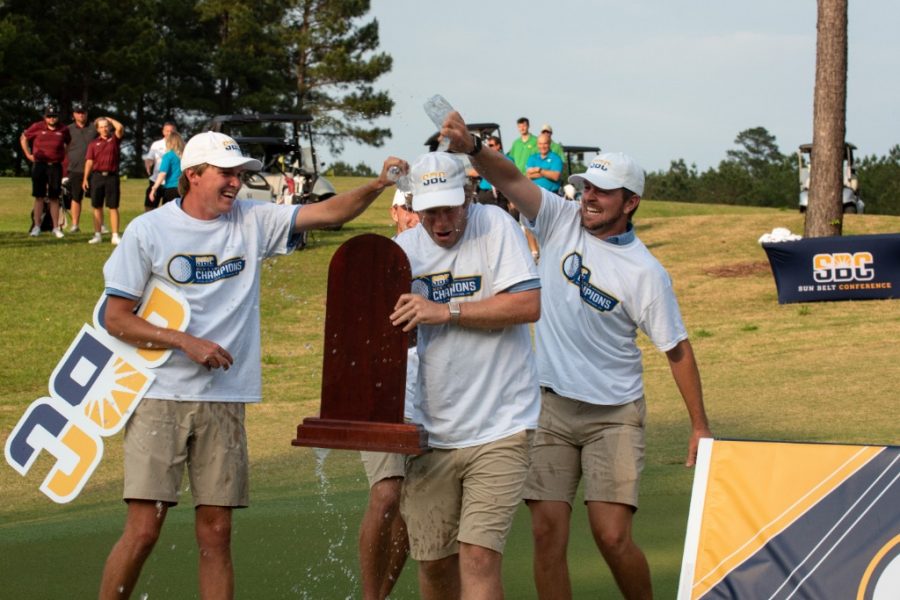 For the second time this month, a Georgia Southern sports team will participate in an NCAA Tournament. This time, rather than the women’s tennis team, the men’s golf team will travel to Tallahassee to participate in the Southeast regional.

After winning the Sun Belt Championship last month, the Eagles were guaranteed a spot in the NCAA Tournament.

“My freshman year, we were on the bubble and we didn’t really know if we were going to get called or not,” recalled Ben Carr. “It was nice to kind of relax and know we could enjoy this one a little more.”

The regional will begin on Sunday morning at Seminole Legacy Golf Club. As the No. 6 seed, the Eagles will be paired with LSU and Georgia Southern and the teams will tee off from 9 to 9:44 a.m.

“Of the six regional sites, the two we had the most interest in was Nashville and Tallahassee,” said head coach Carter Collins. “We know the grass, a lot of Bermuda, short travel and we didn’t have to fly out.”

The Eagles are no stranger to the pressures of playing NCAA Tournament golf, as three of the five current golfers on the 2021 roster were a part of the 2019 team that made an appearance at the NCAA Championships.

Brett Barron, Ben Carr and Jake Maples were all members of the 2018-19 team that finished 26th at the NCAA Championships. Collins acknowledged that this fact should give the Eagles a bit of an advantage as the regional begins.

Two newcomers will participate for the Eagles, as Mason Williams and Luke Dasher will both make their first NCAA Tournament appearance.

“Experience is something that you can’t create on your own, you have to go through it,” said Collins. “I think these five are very strong and very mature. They’re ready to roll and won’t be scared of anything that comes their way.”

The low five teams at each of the six regionals will advance to the NCAA Championships, which will take place at Grayhawk Golf Club in Scottsdale, Ariz.

You can keep up with the live scoring of the regional on the Golfstat website.