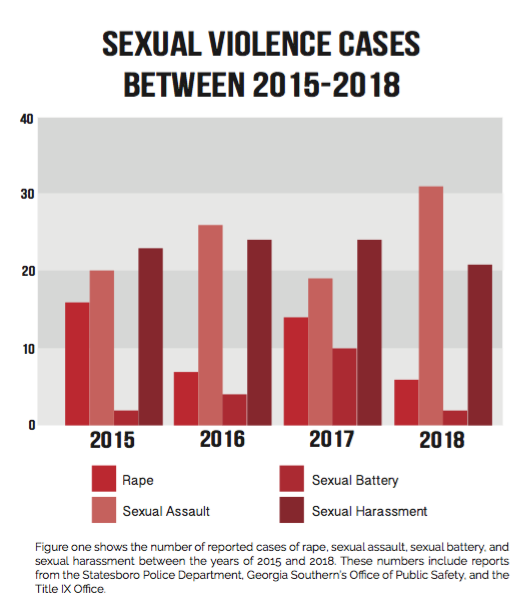 This year will mark the highest number of reported cases of sexual assaults at Georgia Southern University and in Statesboro in the past few years.

Despite this, there could be even more because it is one of the most underreported crimes, according to the National Sexual Violence Resource Center.

This is not to say that these numbers are truly representative of all sexual assaults and rapes that occur on campus, but rather ones that have been reported to the Title IX Office, the Statesboro Police Department and the Office of Public Safety. These numbers do not include the Teal House: Sexual Assault and Child Advocacy Center’s numbers. This non-profit organization offers services and programs to Bulloch County and its surrounding counties, such as free forensic examinations, counseling sessions, support group sessions and a 24-hour crisis hotline.

These reports included various areas because some do not even report to law enforcement at all. This is because some will go through other places, such as the Teal House or the Title IX Office instead because it is not such an invasive process.

However, some will not report at all. According to the Rape, Abuse & Incest National Network, three out of four sexual assaults are never reported.

Jodi Caldwell, who is also the director of the GS counseling center and is also a chair on the Sexual Assault Response Team, or SART, explains that many victims do not report for several different reasons.

“So, a lot of victims will choose not to report for one, yeah, it’s embarrassing,” Caldwell said. “It’s re-traumatizing. Victims often face repercussions from people they know.”

In fact, most sexually violent acts are actually committed by someone that the victim knows.

Although reports were not provided from the Teal House, Caldwell states that the number of reported sexual assaults is increasing.

When these cases are reported, officials advise victims on their options moving forward.

However, in many of these cases, many victims do not pursue any type of legal action against their offenders.

This, however, does not mean that people should not stop reporting rapes or sexual assaults that occur, because he more that are reported, the more of a chance they can get prosecuted.

Taking on cases for a prosecutor means whether or not he or she can prove guilt in the offender. Often times, this is very difficult to do without forensic evidence.

Troy Marsh, who is a criminal defense lawyer in Statesboro, explains that rape cases can be difficult to prosecute for several different reasons. Some reasons can include that the forensic evidence was lacking, the victim could not remember everything, he or she was intoxicated or could also be in a consensual relationship with the defendant.

Also, with the forensic evidence, there has to be proof of whether or not there was consent, too, and sometimes, that, can be difficult, too.

Out of those 1,000 cases of rape, 46 of those actually lead to an arrest of the offender, and only 230 out of 1,000 of those cases are actually reported to the police.

Many Victims Know their Offenders

Despite this, many people and organizations are trying to get the conversation started to better inform people of this issue.

Rachel Pinkerton, a junior public health major, said: “I think we should talk more about it, then people would know more about it because it happens a lot.”