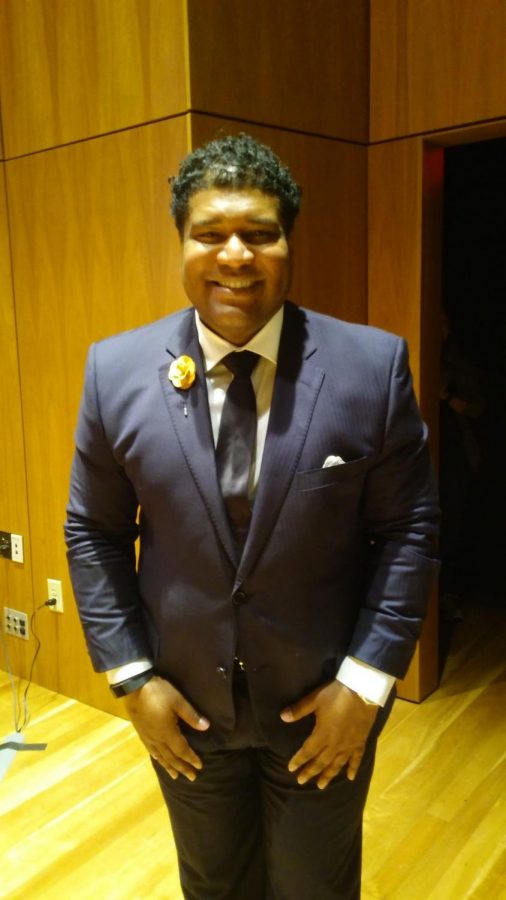 A national expert on diversity and inclusion gave a keynote address Friday Oct.26 in the Carol A. Carter Recital Hall on the Georgia Southern University campus in response to multiple incidents that have taken place over the course of the semester. Damon Williams, Ph.D. gave a keynote address titled “From Awareness, to Action, to Innovation: Empowering Leaders Through Inclusive Excellence” to the GS community.

A national expert on diversity and inclusion gave a keynote address Oct. 26 in the Carol A. Carter Recital Hall on the Georgia Southern University campus in response to multiple incidents that have taken place over the course of the semester.

Damon Williams, Ph.D. gave a keynote address titled “From Awareness, to Action, to Innovation: Empowering Leaders Through Inclusive Excellence” to the GS community.

“Georgia Southern was good,” Williams said to kick off his address. “It is absolutely my pleasure and privilege to be with you today, to be with you and have a chance to be a part of the journey that you are on each and every day toward this idea we refer to as inclusive excellence.”

That was the main question Williams proposed to the audience and the topic of his address.

Williams stressed the importance of not only being aware of diversity and inclusion and doing things to improve them but also asking questions about how innovation could help society progress in such matters.

The importance of innovation

Williams said that while society as a whole is talking more about such topics as diversity and inclusion, there is still an issue of some parts struggling to embrace the idea of innovation itself, and that makes it harder to improve.

Williams discussed what makes good research when studying these matters and how important it is to get to the root of the problem.

Williams went on to explain five main points that make an innovator, something he said would be useful in the weeks to come as GS strives to make improvements in innovation:

Asking questionsLooking for solutionsKnowing that innovation doesn’t happen in a vacuumHaving a bias toward action, experimentation and doingMoving ideas forward

Williams also said that sometimes there is a sixth characteristic not mentioned above that tends to appear when it comes to innovation in the matters of diversity and inclusion, something that holds back innovation if it is not present, the idea of leading with courage.

Once again, Williams stressed the importance of asking questions when moving forward and becoming innovative.

“Once again, I believe that our lives and our careers, even beyond the academic world, are defined by burning questions,” Williams said.

Williams said that in order to truly talk about diversity and inclusion, it must be a wide-spread, honest conversation where every group has a voice.

“Even those who are conscious and ‘Woke’ need to talk about and to engage in the idea of diversity and inclusion only do so in their own ways,” Williams said.

Williams stressed the importance of understanding privilege and taking care when it comes to interacting with people in today’s world, especially in such an age of technology.

How technology has affected today’s society

Williams said that in today’s world, there are no secrets because of technology, and it is one of the causes of evolving cultures, policies, diversity and inclusion, as well as, social activism. Williams called the generation after Millennials, “Centennials.”

Williams also mentioned the use of social media in politics, particularly the presidency.

Williams said that institutions and campuses across the country are more racially charged than ever as people try to decide what to do and where to go next.

“Campus activism and protests are at an all-time high, leaders trying to manage the diversity crisis of the day and at the same time trying to figure out, ‘How do we move forward proactively?'” Williams said.

“If we don’t take time to educate our students to be leaders in this diverse and mobile world, then we’re not setting them up for success,” Williams said.

The importance of working together

Williams compared institutions dealing with diversity to cheetahs. Institutions waiting for an incident to happen and dealing with it then instead of being proactive and trying to prevent it from happening in the first place is like a cheetah waiting for its prey to appear before sprinting after it.

“The challenge that we have is that everything is happening in so many different ways that’s fast, and we’re seeing these different dynamics play themselves out, and we want action,” Williams said. “We want things to happen differently. But they’re nested in this very complex complex that has to be unfurled.”

Williams said that it is more important to be proactive and preventative and work in coordination rather than react only when there is an active crisis. It is better to collaborate and appoint good leadership than to wait until something actually happens to deal with it.

Williams ended his address with a few words of wisdom that showcased what he will be helping GS with over the next few months.

“Difficult will be the process of making excellence inclusive,” Williams said. “Proceed forward with caution.”

At the end of his address, Williams took questions from the audience.

On the “Triggerish” and “n-word” incidents

While Williams did not mention either incident by name in his address, he did comment on the situation at large.

“They are very complex and every instance has to be evaluated on its own merits, that’s one thing,” Williams said. “The second thing I would say is that there’s a part of it that’s ‘What do we do when those instances happen?’”

Williams mentioned his address, which had primarily dealt with how people can be proactive to prevent incidents from happening in the first place, even though that may not always be possible.

“There’s always going to be something that happens, but how can we do more work on the front end to help folks to have less incidents and help us to have a stronger community?” Williams said.

For a full video of Williams’ speech, click below.