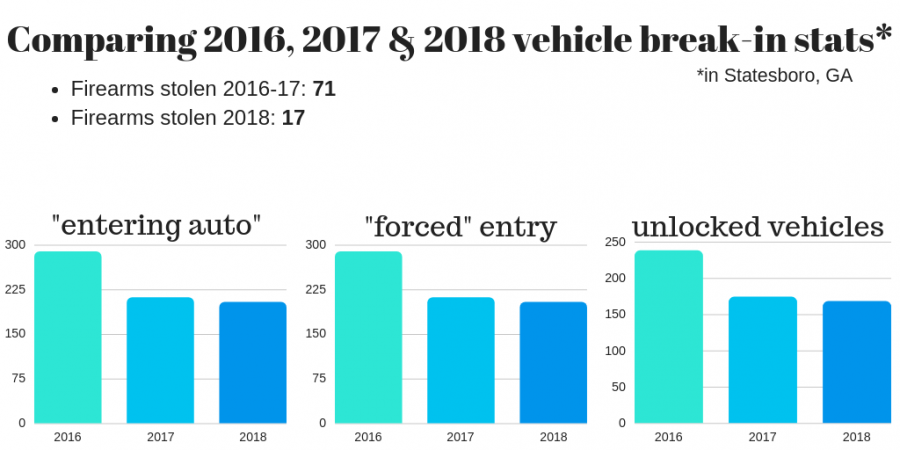 The graphic above displays the statistics of vehicle robberies in Statesboro since 2016.

The Statesboro Police Department has been attempting to lower the number of vehicle break-ins in 2018 by using Twitter.

On March 15, Statesboro PD posted its first tweet regarding locking vehicles at 9 p.m. to help prevent theft, using the hashtag #lockyourcar. Since this initial tweet, the SPD has tweeted periodically at 9 p.m. to remind people in Statesboro to lock their cars.

Since the beginning of 2018, there have been a total of 190 “entering auto” reports in Statesboro, an email from Chief Broadhead said. Of those reports, 27 were forced, and 163 were to unlocked vehicles.

Additionally, there have been a total of 14 “entering auto” reports on the GS campus, an email from Geoffrey Carson, Associate University Counsel, said. Of those reports six were forced, five were to unlocked vehicles, and three were unknown.

There have been eight fewer “entering auto” reports than in 2017. Of those, there have been five fewer forced entries and 70 fewer to unlocked vehicles.

According to Statesboro PD’s Facebook page, 71 of the car break-ins in 2016 and 2017 involved the theft of firearms.

Broadhead said that since the beginning of 2018, there have been a total of 17 cases that included the theft of a firearm from a vehicle, 54 fewer than the past two years.

“This includes 16 handguns and one rifle. In each case of a stolen firearm, the vehicle was non-forced,” Broadhead said.