Now with a walk-off touchdown in hand, Kennedy III plans to continue his role at slotback 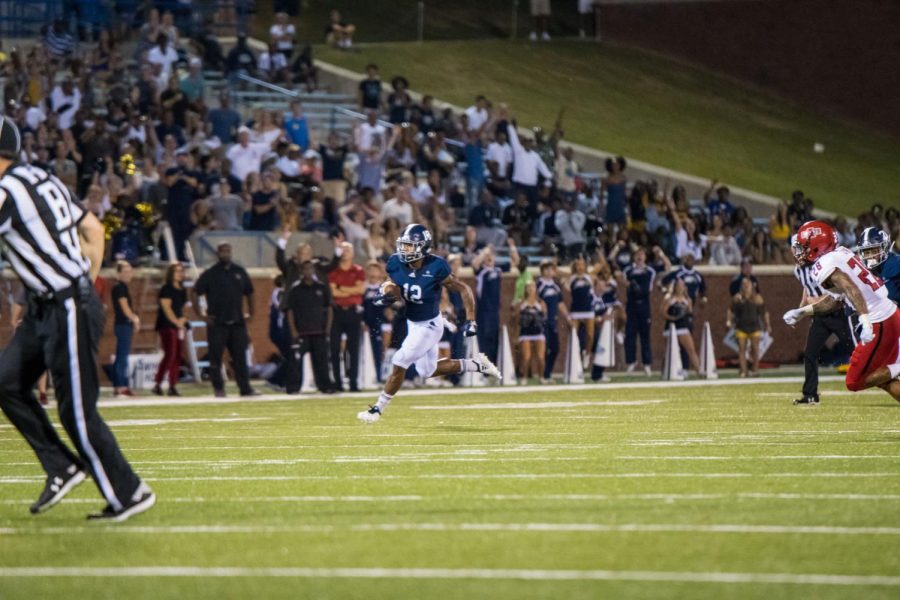 Behind Georgia Southern’s resurgence are many individuals getting their chance to better the team on both sides of the ball. Among the playmakers on the offensive side of the ball is sophomore receiver Wesley Kennedy III.

Kennedy III attended Benedictine Military School in Savannah, and has been involved in sports his entire life. He talked about his involvement in sports since just a young age.

“I played flag football since I was four,” Kennedy III said. “I ran track, played basketball and baseball.”

The sophomore has emerged as a force in the GS offense, gaining 131 yards on the ground and 140 yards through the air in just the first four games of the season, but Saturday was Kennedy’s breakout party. The slot back rushed for 105 yards on eight carries, including a 47-yard sprint to the endzone off of a reverse, giving the Eagles a narrow victory over Arkansas State.

The touchdown was Kennedy’s first of the season, but he reminisced on what his favorite run was up to that point. In 2017, when Georgia Southern traveled to Louisiana (Lafayette) and pulled off the upset. Kennedy broke off a 77-yard run, saying the moment was a special one for him.

Through their first four games GS is 3-1, with that one loss coming to national powerhouse Clemson, and along with his teammates, playing in Death Valley was a cool moment for Kennedy.

“It was fun, it was a big stage,” Kennedy III said. “It was kind of my first time playing at a bigger school like that, so it was just a good experience.”

Wesley Kennedy III looks to play a big role in helping the Eagles achieve their goals in 2018, but even looking into the future of the program, things are looking up.

“We’re just trying to keep working each day and let them know that we’re not playing anymore and Georgia Southern is back.”