Talavera taking pride in being a captain for the Eagles 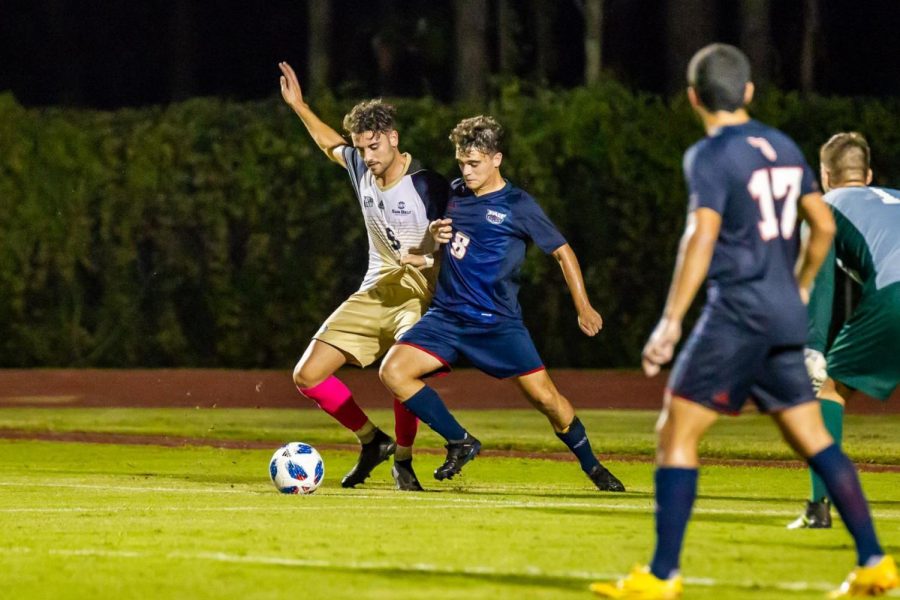 Sophomore Gonzalo Talavera wards off a player in the game against Florida Atlantic. Talavera played for Atletico Madrid.

Sophomore Gonzalo Talavera is a defender from Madrid, Spain who has played for the Eagles for two years and has had quite the impact as a team player.

Head Coach John Murphy found Talavera in the recruitment process while scouting in December of 2016.

“I went over to Madrid and saw this kid playing center back and I thought he was very authoritative and strong,” Murphy said. “He had a lot of the qualities I was looking for in that position.”

Before Georgia Southern, Talavera played soccer in Madrid for Atletico Madrid where he went 22-4-4 with his team, leading to winning his group.

“I started when I was seven,” Talavera said. “Before that I tried a bunch of different sports but since I started playing soccer I’ve played for my entire life.”

His freshman year Talavera started all 18 matches and played an impressive 1,639 minutes of 1,650 which helped the defender be named Sun Belt Defensive Player of the Week in September of 2017.

“He plays in the position of central defender, he’s somebody that’s authoritative and understands the game,” Murphy said. “He communicates; he has the respect of the entire team.”

This season Talavera has been a huge asset to the Eagles. Not only being a great all-around player by scoring a goal this season and notching five shots, Talavera was also named captain in the beginning of the season alongside junior Justin Little.

“It was a really good honor for me to be captain,” Talavera said. “I’m trying to give my best for my teammates.”

Talavera and the rest of the Eagles have four more regular season matches before Sun Belt tournament play starts up.