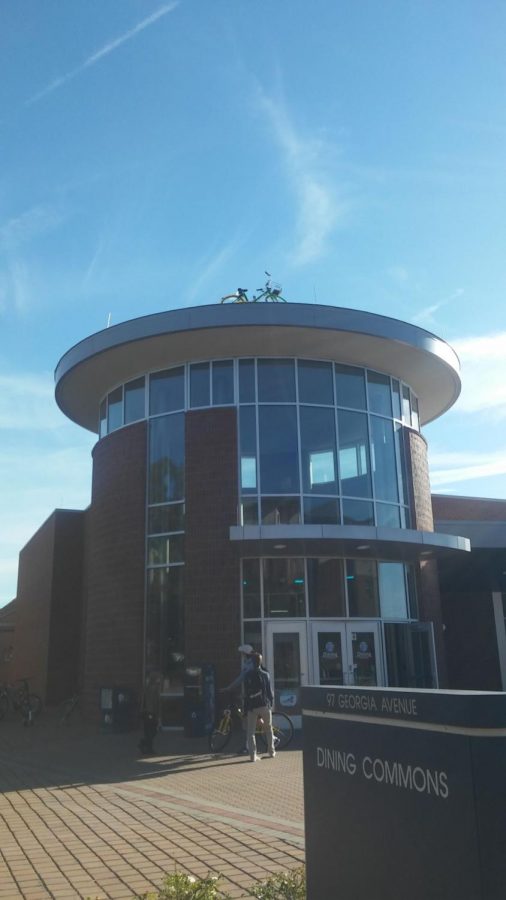 Another Lime product has been found in an odd place on the Statesboro campus.

Students found a Lime bike sitting on the roof of the entrance to the Dining Commons Wednesday morning, presumably put there by a group of students the night before.

Erin Donaldson, freshman psychology major said in a direct message, that she and her roommate were walking out of the Dining Commons and saw two males carrying a Lime bike around the back of the University Store. One male managed to scale the side of the building, and the other handed the bike to him.

“The one guy walked away and we didn’t see the guy on the roof come back down because we left,” Donaldson said. “This is definitely not what I was expecting when I came to Georgia Southern for my first year of college, but it has certainly been entertaining.”

Students were certainly surprised to see a bike in such an odd place, and some voice their thoughts about it.

“I think that this whole Lime situation, in general, is a bit much,” Alexis Hampton, sophomore nursing major, said. “But if I had to choose between the Lime bikes and Lime scooters, I would probably choose Lime bikes. The scooters, in general, are just too much, like, there was one on the lake the other day, there was one on top of the Carroll Building. Why don’t we just keep them on the ground?”

Lime gave a statement regarding the recent incidents involving their products in a previous George-Anne article.

“Out of the scooters and bikes Lime has across the country, only a few have been vandalized, which is consistent with the low rate of vandalism and theft, less than 1 percent, we experience nationwide, Erika Scholz Van, account director for Lime said in an email. “If anyone sees a Lime scooter that they suspect is being tampered with or vandalized, we’d ask that they please immediately report it to our 24/7 customer service team, available through the app, email (support@limebike.com) and phone call: 1-888-LIME-345 or text: 1-888-546-3345.”