Students on the Armstrong campus create petition to save Learning Commons 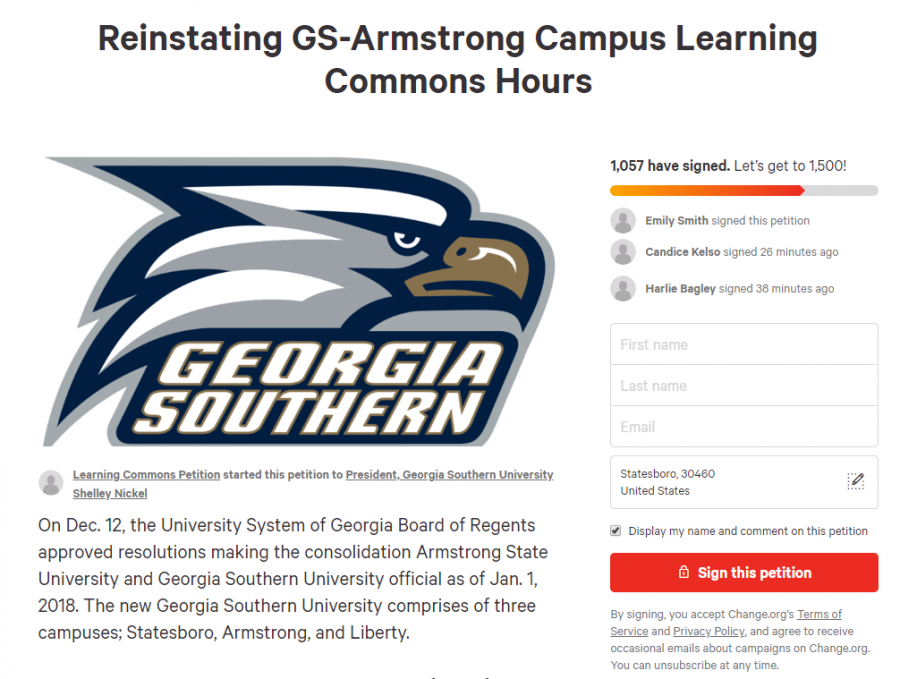 Students on the Armstrong campus started a petition after the hours of the Learning Commons were cut back by the univserity. As of Thursday, the petition has reached its goal of 1,000 signatures and is now at 1,165 signatures.

A petition concerning the adjustment of the Armstrong Campus Learning Commons operating hours is circulating among Georgia Southern University students.

The Learning Commons is an educational space that provides students academic needs such as printing, studying, remote or online education, tutoring, meetings and more.

Apart from the Lane Library, which stays open from 7:30 a.m. to 11 p.m. Monday through Friday, the Learning Commons is the central location for group-study, many tutoring sessions and printing facilities for the students.

According to the petition, the change in common hours is one of many issues that has taken place on the Armstrong campus since the consolidation of the universities in January. Other such issues include the cut of the athletics department, a rise in housing fees, changes in the course of student organizations and a depletion of the resources for the veteran student population.

Spencer DeMink, executive vice president for the Student Government Association on the Armstrong campus, said that housing fees were raised, as they tend to each year, and the budget to athletics was cut.

“The Learning Commons hours is one of the top concerns on campus right now, as well as the loss of athletics on campus,” DeMink said in an email. “Housing rates do increase a small bit each year because housing here is under contract with Corvias and that is part of the agreement.”

DeMink said that the Learning Commons hours changes were a budgetary issue which stemmed from the consolidation.

“With the consolidation of the two universities, the Armstrong campus took a hit of about 1,000 students leaving the campus,” DeMink said. “Because of this, money has been tighter. Low enrollment and lower funds equal less operating hours for things like the Learning Commons, Writing Center and Language Lab.”

DeMink said that the SGA on the Armstrong campus and the student body will be working to fix the issue.

“We are aware this wasn’t malicious, as the last thing the university wants is to prevent student success,” DeMink said. “But if we can do anything to rectify this problem, we will.”

Nipuna Ambanpola, a senior economics major and former SGA president, signed the petition the day it was released and said he hopes it will bring awareness of the depletion of Armstrong’s academic resources to the administration.

“In three years of my SGA experience, SGA has been fighting the administration to try to get the Learning Commons to operation at 24 hours a day,” Ambanpola said. “I don’t know what went wrong but apparently we don’t have enough money and they cut the hours.”

Ambanpola said that students on the Armstrong campus are willing to make cuts to things such as homecoming events to save their academic resources.

“We thought the consolidation was supposed to save money, but that’s not the case it would seem,” Ambanpola said. “We now have students who are saying ‘Don’t give us free t-shirts, don’t have homecoming events, just have academic resources open.'”

“The Learning Commons is pretty popular,” Reist said. “There really isn’t another facility like this on the Armstrong campus. Students do not have a lot of alternatives if we aren’t open.”

As of Thursday, the petition has exceeded its goal of 1,000 signatures and is now at 1,165 signatures.