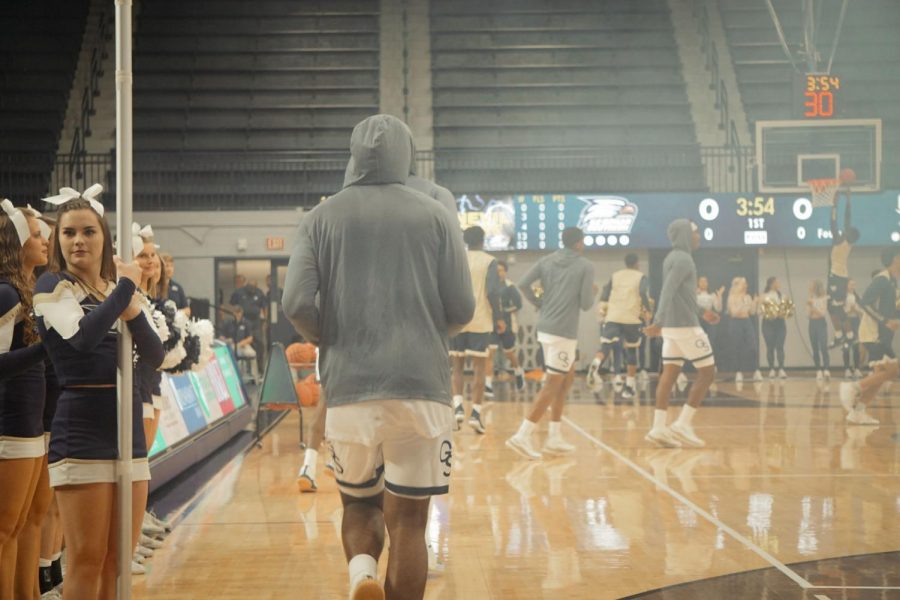 The Eagles take the court for their exhibition against the Charleston Southern Buccaneers. Georgia Southern hosts Carver College Tuesday for the first game of the regular season.

The Georgia Southern men’s basketball team saw their first action of the season with an exhibition matchup against Charleston Southern on Tuesday.

In their return to the hardwood, the Eagles came out looking sharp to impress the fans in attendance.

The Eagles had the hot hand offensively in the first half, sinking five of their first six shot attempts to jump out to an early 11-4 lead.

Once they got out in front, the Eagles kept fire shooting the basketball, and went into halftime with a 58-33 lead over the Buccaneers.

“I thought in the first half we played at a really high level,” GS Head Coach Mark Byington said. “In the second half, we didn’t come out with the same intensity.”

The Buccaneers outscored the Eagles 28-21 in the modified 12-minute second half, but their first half deficit was too much for them to overcome. The Eagles won the first part of the exhibition meeting by a final score of 79-61.

Redshirt-sophomore Quan Jackson lead in scoring for the Eagles, putting up 17 points in his 29 minutes of play.

After the second “half’s” conclusion, the teams played another 12-minute period in which the score was reset back to 0-0.

In the final section of the game, CSU outscored the Eagles 26-23. A positive takeaway for GS though, is that the final 12 minutes of play gave Byington ample opportunity to give younger, and more inexperienced guys on the team plenty playing time.

“It was a great learning experience for our guys, especially our new guys,” Byington said.

Senior starting point guard Tookie Brown was happy with his team’s performance, and quite thrilled with the fan turnout inside Hanner Fieldhouse, saying he definitely didn’t expect such a large crowd for a preseason game.

“We know what we need to work on,” Brown said. “Now we can work hard on getting better every day.”

Quan Jackson, who also started for the Eagles, was happy with their performance in the first half, but was disappointed in the team’s second half effort.

“In the second half, we came out a little sluggish and had to make some adjustments,” Jackson said. “We’ll work on that and get better.”

Overall, Byington was really proud with the way his team came out and performed.

The Eagles coach was thrilled to get back in front of the fans in Statesboro, and was really pleased with the amount of people who came out to support his team.

Outside of the game itself, and frankly what he was most excited about, Byington was happy to know that his team helped play a role in the effort to raise money for hurricane relief.